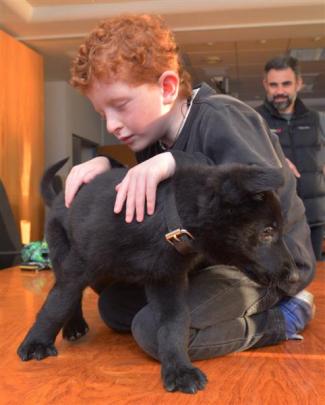 Dunedin's newest deputy dog looked pretty good yesterday for a pooch who has been called every name under the sun.

Dunedin police received more than 27,000 entries in a week-long competition to name the canine crime fighter.

''It's ideal. It's short and sharp and one syllable.''

Police were ''overwhelmed'' by the public response to the competition, he said.

An article announcing the name on the Otago Daily Times website yesterday was shared more than 1000 times within a hour of being posted, while the Dunedin police Facebook page, which hosted the competition, also received much positive feedback.

However, not everyone liked the name, with several readers pointing out that kohl was the German word for cabbage.

Someone who will be keenly following the canine's career is Kohl Goodfellow (7), of Dunedin, who has been blind since birth, after contracting the rare eye condition anophthalmia.

His mother, Tash Loder, was one of several people to suggest the name.

''We named him Kohl because it's a different and strong name, just like him. So I thought it would be a good name for a police dog, too,'' Ms Loder said.

''We were so excited when the police told us our name had won. We're over the moon.''

The two Kohls hit it off as only a boy and a puppy can, when they met at the Dunedin Central Police Station yesterday. K9 Kohl was a bundle of disorderly conduct, as he wriggled, licked and puppy-loved his way around the room.

''I think it's good, especially as his name is spelled the same as mine,'' Kohl said, before grimacing at another face-licking.

Police were delighted with the response to the competition, which also drew plenty of tongue-in-cheek suggestions, such as Kaution, Kimdotcom and Kronic, Southern district communications manager Vivien Pullar said.

''There has always been a lot of community interest in our police dogs. People love puppies.''

The other shortlisted names for the Trentham police dog breeding programme graduate were Kaha, Kosta, Kaos and Kaida.

K9 Kohl was remanded in custody to reappear after an extensive police training programme.