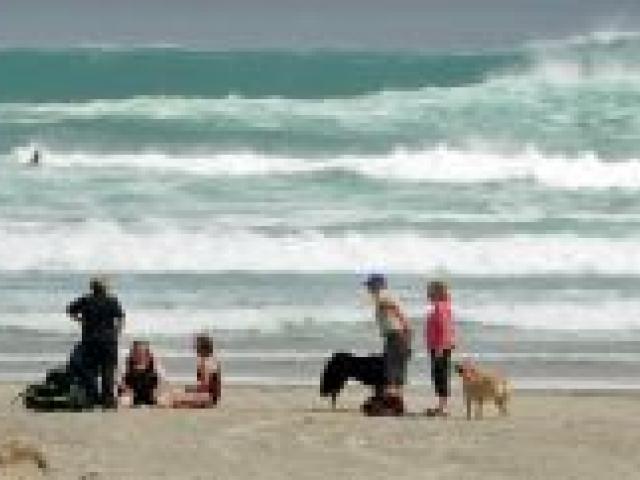 Emergency services tend to the rescued woman (sitting, facing camera, at left of picture).
A Dunedin woman rescued from Tomahawk Beach by a stranger says she would probably not be alive if it was not for his efforts.

The 44-year-old, who did not want to be named, was with a friend in waist-deep water on Tuesday when a large wave knocked her over and pulled her out to sea.

She was rescued by former Otago football player and pool lifeguard Aaron Burgess, who was at the beach with his two young children.

The woman said it was ‘‘miraculous'' someone of Mr Burgess' ability had been close by when she was in trouble.

‘‘I think it was definitely a case of the perfect person being in the right place at the right time.‘‘I don't think I would have been here if it wasn't for him, that's for sure.''

She swam regularly at the beach and had never got into trouble there. She and her friend had been splashing in the water when a wave about chest-height came out of nowhere.

‘‘It was enough to knock us off our feet. Coming in, it wasn't any stronger, but going back out it was.

‘‘My friend managed to make it back to shore. I saw her get further and further away and thought ‘man, I'm in trouble'.''

She does not remember much of the rescue, other than Mr Burgess pulling on her shirt as he dragged her back to shore.

‘‘I was really panicking by the time the guy arrived.

‘‘By the time he got to me, I was pretty much running out of lung capacity.

‘‘I don't think I would have survived very long at all [after that], to be honest. It's quite miraculous that he managed to get out there at all and get me.''

The woman had not had a chance to talk to Mr Burgess since the incident and had not given herself much time to think about it.

She was taken to Dunedin Hospital with minor injuries after the incident but had been discharged yesterday.

She would always swim between the flags from now on and had a message for fellow swimmers.

‘‘Just make sure there's always rescue people around, because you never know what's going to happen.

‘‘I certainly wasn't expecting that.''