Zen and the art of motorhome travel 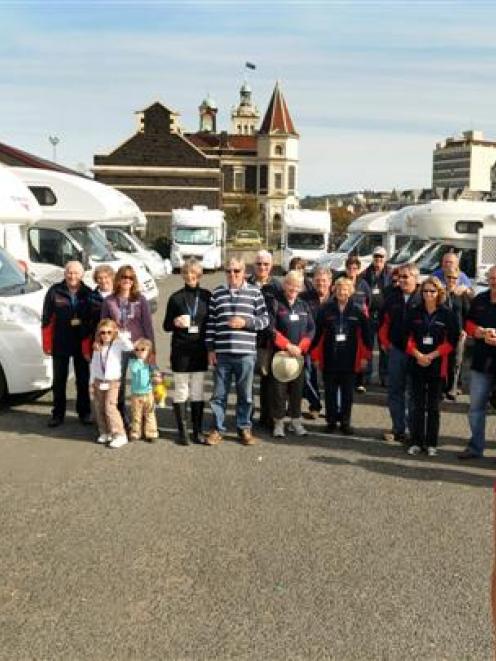 In front of Winnebago RV Club members and their motorhomes parked at the Dunedin Railway Station on Saturday afternoon are Kate and Neil Whithear of Christchurch, and Archie (2). Photo by Peter McIntosh.
Millions of dollars in luxury motorhomes rumbled into Dunedin on Saturday afternoon as part of a 10-day southern safari organised by the Winnebago RV Club.

The 18 motorhomes, which range in price from $150,000 to $250,000, began their "Untouched South" safari from Moeraki on Friday before meeting at the Dunedin Railway Station on Saturday.

The first was a "Top of the South" safari in November.

The "Untouched South" safari would take in Dunedin, the Catlins, Hauroko, Manapouri and Te Anau before finishing in Balfour on April 27.

"It is a great way to travel."

Club members were encouraged to travel independently, to avoid a convoy developing and were given recommendations on what to see and do in each area, she said.

Meeting at the Dunedin Railway Station car park, club members deftly reversed their motorhomes, some of them up to 8m long, into the narrowest of spaces before boarding the 2.30pm train on the Taieri Gorge Railway.

A director of motorhome dealer Freedom RV, Mrs Whithear said most clients were over 50 and enjoyed seeing the country in the comfort of private motorhomes.

David Whitmore, of Greymouth, said he bought a $180,000 motorhome after selling his farm a year ago.

He enjoyed the freedom it offered.

"It is good meeting up like this, as a club, because we are all from different walks of life," he said.

Jenny Christensen, of Pisa Moorings, said she preferred a motorhome to the VW Kombi in which she travelled around Europe in her younger days.

"It was cramped and broke down all the time. This is better," she said.