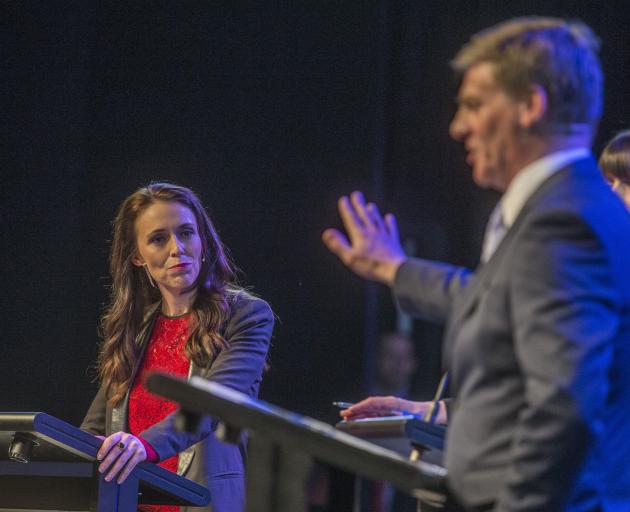 The  leaders’ debate was billed as a rowdy affair, and moderators Joanna Norris and Tracy Watkins allowed the pair to go head to head often.

A clash was inevitable on Steven Joyce’s failed attempt to identify an $11.7billion hole in Labour’s budget. Ms Ardern exhorted her rival to stop "maintaining a lie". Mr English backed his finance spokesman, trying to shift the debate to what had "come out of the discussion" — the claimed lack of new spending in areas apart from health and education.

Ms Ardern said he was wrong, as there was new spending.

Mr English would not let up, speaking passionately about police officers who could miss out on pay rises, prompting Ms Ardern to say: "Bill, take a breath."

Mr English told Ms Ardern her finance team had let her down, to which Ms Ardern shot back, "Your team has lied."

"If you continue to maintain that, you’re maintaining a lie," she said.

When the pair clashed on water quality and climate change, it was evident the leaders had to an extent switched strategy.

Where Ms Ardern was happy to go on the attack, with less emphasis on her much-vaunted positivity, Mr English was determined to be upbeat, saying  the water quality problem was a challenge he looked forward to tackling. He talked about a "Kiwi way" of improving water quality, and said Labour was ignoring progress in that area. Mr English portrayed pressure points such as housing as signs of a successful economy, saying thousands of young people were staying home rather than embarking on an overseas experience.

That led to one of Ms Ardern’s best lines: "Are you saying this generation has stayed home for you, Bill?"

Ms Ardern held the line on tax, her biggest weakness, highlighting 18 tax increases under National. She prodded Mr English on his party putting up GST in 2010 without campaigning on it, and the introduction of a "pseudo capital gains tax" in the form of the bright-line test.