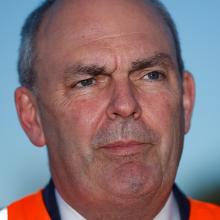 Last night’s online debate took place shortly after the latest Colmar Brunton poll showed Labour in front of National by four points.  Labour was on 44%, National 40%, the Greens 7% and New Zealand First 6%. Moderator Tracy Watkins asked Mr Robertson if Labour had needed to execute a U-turn, given the positive poll. Mr Robertson said it had been the right thing to do.

to deal with housing  he had previously said were urgent.

"He’s decided he hasn’t got the courage to do it."

Labour yesterday backed down from a promise to implement a tax working party’s recommendations before the 2020 election. The party is still campaigning on a water tax, which Mr Joyce said had farmers "worried to death".

Mr Robertson goaded Mr Joyce about tax increases under National, including a GST hike the party did not signal before an election.

Mr Joyce said that was different because it was accompanied by an income tax cut.

Mr Joyce said Labour would pursue a "radically different economic agenda" in areas such as industrial relations, which  would slow the economy. Mr Joyce’s discredited fiscal hole claim about Labour’s spending plan got another outing last night, Mr Robertson saying he was sick of hearing Mr Joyce talk about it "night after night".

Mr Robertson accused National of having its own  fiscal hole, as leader Bill English committed to an incomes package in 2020 in a bid to show his party was doing more to relieve child poverty, but it was not costed.

Mr Joyce denied that and said there was capacity in that year for such a package. Neither  fared particularly well in a quick-fire question round. They both overestimated the  proportion of the economy made up by agriculture by more than double its 5.7% share.

Mr Joyce was asked about the grilling Mr English received at an orchard pack house in Gisborne yesterday about minimum wage increases. A worker told Mr English it had increased by just $3.75 an hour over nine years.

Mr Joyce said some workers’ wages had increased more than others.

He said National’s tax cuts were fairer than Labour’s tax credit package because they would benefit more workers, while Labour was targeting people with young children.