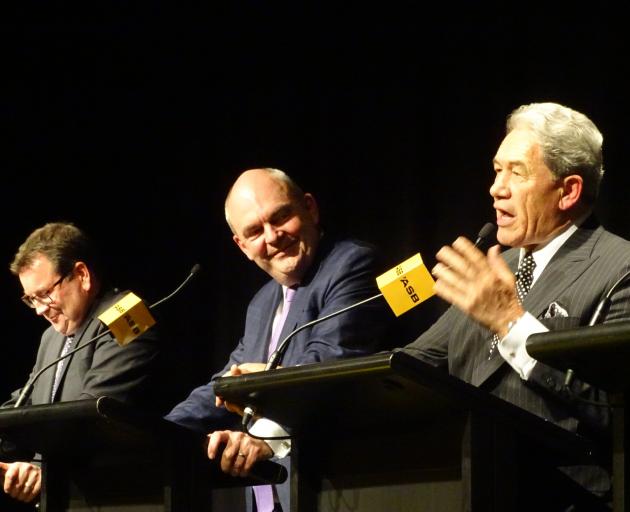 On a capital gains tax, Mr Gower asked New Zealand First leader Winston Peters if he would stop the Labour Party introducing one during potential post-election negotiations between the two parties.

Mr Peters avoided the question, instead telling Labour finance spokesman Grant Robertson that he should tell the public before the election what rate the tax would be.

On an international tourist tax, Green Party leader James Shaw said his party had a different version to that announced by Labour on Monday, but he was confident any border levy up to about $50 a head would make no difference to tourist numbers.

Mr Peters said the Government should instead return the $1.5billion in annual GST receipts from tourism back to the regions where it was generated.

On the question of a bed tax, Finance Minister Mr Joyce said it was unnecessary because local councils, such as those in Queenstown Lakes and Auckland, effectively already had them in the form of targeted rates on businesses benefiting from tourism.

Mr Peters said he favoured the idea as a last resort if the Government failed to return more of its GST take to the regions, while Mr Shaw said he supported a recommendation for a national bed tax contained in last year's McKinsey report, and also wanted campervans to be taxed.

But Mr Seymour said Act opposed bed taxes, and councils should instead be able to keep half the GST receipts on construction activity in their districts.

Mr Gower asked the five men about the ''elephant in the hall'' - the leaking of details about Mr Peters' superannuation overpayments.

Mr Joyce said he could categorically deny the leak came from the Beehive.

Mr Peters claimed the National Party ''broke the law and they're not going to get away from it'', ignoring a call from Mr Seymour to make all his correspondence about the matter
public.

The debate was marked by frequent verbal jousting between the Act and NZ First leaders, which began when Mr Peters told Mr Seymour he was behind in the polls in Epsom: ''This is your valedictory speech.''

The pair's frequent testy exchanges prompted Mr Joyce to liken them to a ''couple of chihuahuas''.