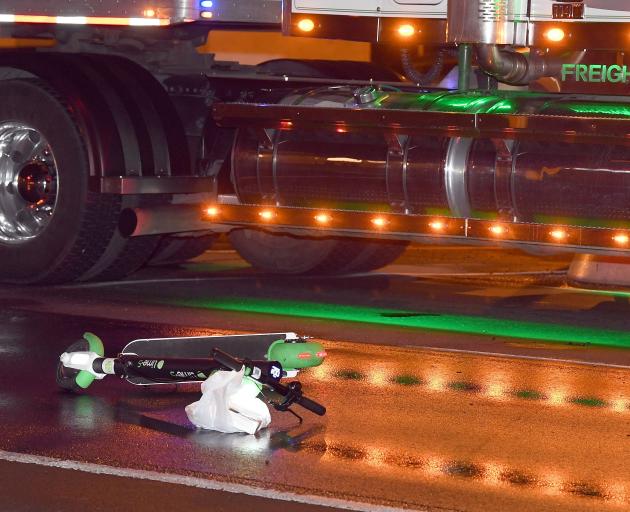 The Lime scooter Renee Whitehouse crashed on, and which the company has now charged her $100 for not returning. Photo: Stephen Jaquiery

New figures released on head injuries caused while using e-scooters show almost $700,000 has been paid out by ACC since October last year.

And despite e-scooter rules requiring the user to be over 18 years old, more than 10 people aged under 16 received head injuries.

The figures detail the number and cost of e-scooter accidents that resulted in head injuries between October 2018 and April 2019.

Broken down by age group, people aged in their 20s made the most claims for head injuries, with a total of 184, while those in their 30s were the next highest on more than 69.

Across all age groups, the total cost of e-scooter head injury claims was $675,648.

From the seven-month period, the summer months saw the most injuries, with January recording a total of 95 injuries, and 73 in February.

However, head injuries are just one of the claims associated with e-scooters.

Last month the Herald revealed that ACC had racked up just over $2.1 million in e-scooter related claims since Lime launched in New Zealand in October last year.

There were 2211 e-scooter accident claims between October 14 and May 10, including; 359 fractures or dislocations, 46 involving concussion and 44 dental injuries.

The worst accidents have required hospitalisation, such as 26-year-old Dunedin woman Renee Whitehouse, who suffered serious injuries including a fractured skull when her Lime tangled with a truck on January 18, and 27-year-old Auckland man Liam Thompson who broke his jaw after being thrown over his Lime's handlebars on February 9.

Last month Auckland Council announced it would run the second trial of the e-scooter ride share schemes until October 31, 2019.

The city now has three e-scooter rental companies, Lime - which has been operating in Auckland since October 2018, Wave - which launched its first e-scooters in March, and newcomer Flamingo.

Within the second trial, the council also announced a revised code-of-practice to improve user safety.

It encourages operators to enforce a 15kmh speed limit in restricted areas, and includes more stringent requirements on safety and risk management, and regular maintenance and weekly maintenance checks.