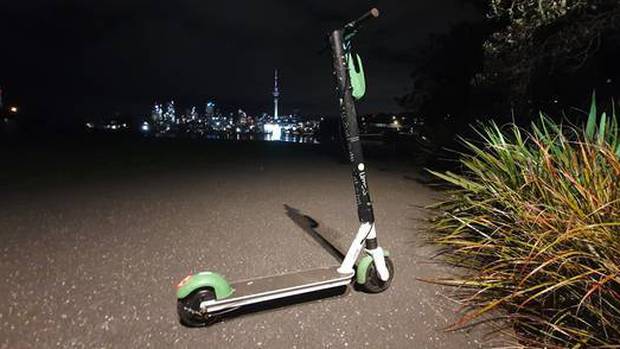 A Lime Scooter spotted at Westhaven Drive, St Mary's Bay, Monday night. Photo: Visual Media Productions via NZ Herald
A witness to a fatal Auckland Lime e-scooter crash says he believes the front wheel may have locked up - sending the victim flying over the handlebars.

A 23-year-old man died at the weekend after falling off a Lime scooter in downtown Auckland on September 16.

The death is believed to be the first ever from an e-scooter in New Zealand and has been referred to the Coroner.

Back in June, a 58-year-old man died riding a Lime, but police said he suffered a "medical event" and the matter was referred to the Coroner.

In February, Lime scooters were temporarily taken off the streets of Auckland and Dunedin amid ongoing concerns about their safety, including reports of a problem with front wheels locking.

The man was rushed to Auckland Hospital in a critical condition after the incident on Westhaven Dr in the suburb of St Mary's Bay.

Jeff Young, a Remuera property valuer, witnessed the crash and told The New Zealand Herald today that it appeared that the scooter's front wheel may have locked up.

Young was driving along Westhaven Dr toward the Harbour Bridge when he saw the Lime scooter rider in the left-hand road lane about 30 to 50 metres in front of him and travelling about 15km/h to 20km/h.

He said the man, who was not wearing a helmet, appeared to get into trouble and veered to the right.

Young said the rider could have been looking around "even looking to hear or see me, thinking 'I'm on the road probably not doing the right thing'."

"In the process he was thrown over. It was like the rear wheel came up and threw him off which probably told me his front wheel must have locked up in some way, which meant the handlebars could have been locked to one side," he said.

Young said the man went over the handlebars and landed on his back, striking his head on the ground about a metre over the centre line in the right hand lane on the road.

"He didn't move at all from that point," said Young, who stopped and was joined by three or four people on the Westhaven boardwalk. "We could see he was breathing, but there was no movement whatsoever."

Young said a woman called the emergency services and they were told not to touch him.

"What we wanted to do was something for him, but they said don't. So for 15 minutes to be standing around directing traffic while this poor guy was just lying there was pretty hard. We did put a jacket on him," he said.

An ambulance arrived 15 to 20 minutes after the accident and the rider was put in a neck brace and put in the ambulance, Young said.

The experience upset Young, who said he thought at the time it was good the man was breathing, but with no movement for 20 minutes knew he might not survive.

CALL FOR HELMETS TO BE COMPULSORY

The decisions followed a number of recent incidents, some of which have resulted in injuries, caused by the wheels on e-scooters unexpectedly locking.

Young believed helmets should be compulsory for all e-scooter riders. He could not be sure a helmet would have saved the man in last week's accident, "but I would have thought he would have stood a far better chance of surviving".

Young, who has ridden on Lime scooters to the maximum speed, said if you are not wearing a crash helmet it is easy to get unstuck and have an accident.

It is compulsory to wear a helmet while riding a bicycle.

The Auckland death comes after a study, published in the New Zealand Medical Journal last month, said e-scooter crash victims were arriving at hospitals with the sort of traumatic, multiple injuries usually only seen after car crashes.

ACC data shows that claims for e-scooter crashes are still dwarfed by scooter, motorcycle and car crashes. But one thing that stands out in recent research on e-scooter crashes is the severity of the injuries.

Researchers of the study found that the most common crash times were between 8am and 9am and after 6pm, and the most likely age-group to crash were 20-29 year-olds and riders older than 50.

Lime spokeswoman Lauren Mentjox said the entire team was deeply saddened by the news of the death.

"Our thoughts and sympathies are with the rider's family and loved ones during this extremely difficult time. At Lime, we take rider safety very seriously and we are working closely with the authorities to support their investigation."

Auckland Council's director of regulatory services, Craig Hobbs, said the council was saddened to learn of the death.

"Our thoughts and condolences are with the young man's family and friends at this difficult time."

The council had been in contact with Lime since Monday evening when it first heard reports of the accident.

Lime has given a verbal update and provided a report.

"At this stage, Auckland Council has not been given any information which may suggest a mechanical failure of the e-scooter involved in this tragic incident," Hobbs said.

"All details relating to the cause of this incident are now with the Coroner and, as such, we are unable to provide any further information at this stage.

"We can, however, confirm that we have received no other reports of mechanical issues with e-scooters either prior to or after this incident."

Hobbs said the council was currently in the final six weeks of phase two of its e-scooter trial, and would soon be evaluating what had been learned during the trial.

"Safety has always been paramount to us, and balancing this with significant demand for micro-mobility options is something that many cities around NZ and the world are grappling with."