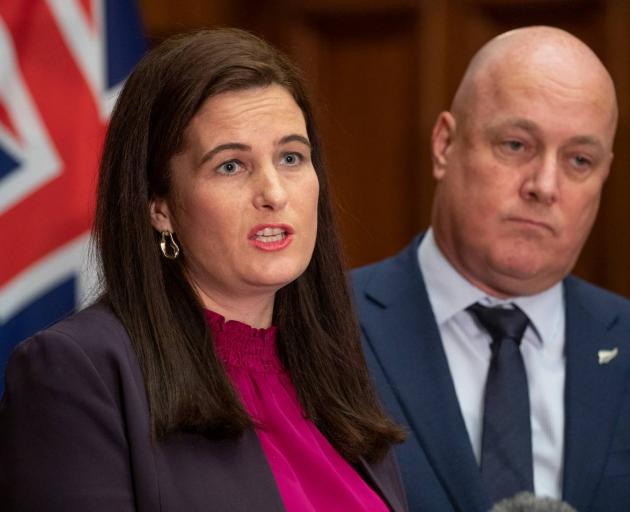 National deputy leader and finance spokeswoman Nicola Willis. Photo / Mark Mitchell
Opposition MPs are not holding back in their disdain for Budget 2022, with National labelling it "backwards" and Act the "brain-drain Budget".

Meanwhile Government support partner the Greens say there needs to be far stronger supports to address the "inequality crisis", including liveable incomes and a wealth tax.

Finance Minister Grant Robertson this afternoon unveiled a health-focused Budget including $5.9 billion in new spending, with an emergency $1 billion cost-of-living package tacked on.

That money will go towards cash payments of $350 for more than two million people, extending the 25-cent a litre fuel tax and road user charge cut for a further two months, costing $235m, and a two-month extension to the half-price public transport scheme at a cost of $132m.

The package is clearly aimed at the National Party, which had been goading the Government to implement a $1.7b tax cut package to alleviate the cost-of-living crisis.

National had also been challenging the Government to find savings in existing spending. The Government responded today, publishing about $500m in savings.

Leader of the Opposition Christopher Luxon said it was a "Backwards Budget".

"Kiwis, the economy and outcomes are all going backwards under Labour and today's forecasts confirm the situation is only going to get worse before it gets better.

"Labour's cost-of-living package is a temporary band-aid. The squeezed middle is paying the price for Labour's economic mismanagement."

"Jacinda Ardern and the Labour Government have today presented New Zealand with the Brain Drain Budget. Ambitious New Zealanders, tired of being milked, will weigh up leaving for greener pastures."

The Green Party, meanwhile, welcomed the new spending on climate action - announced on Monday - and housing funding, but said more needed to be done to address rising inequality.

The party also welcomed the two-month extension to half-price public transport, but called for it to be made permanent for Community Services Card holders.