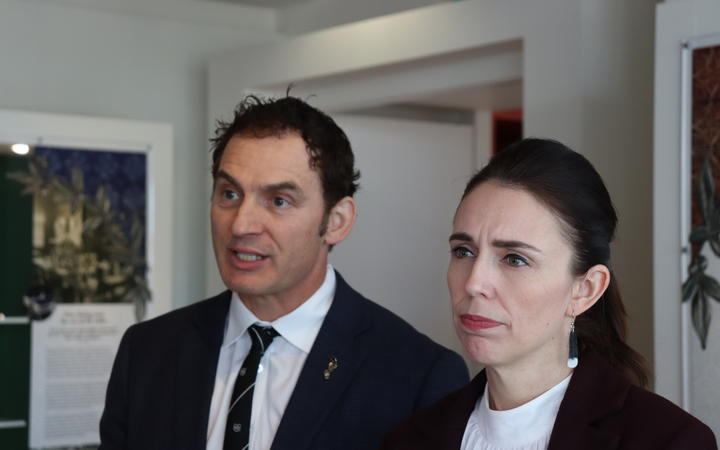 Prime Minister Jacinda Ardern and Stuart Nash. Photo: RNZ (file)
The Government has congratulated Team New Zealand and reaffirmed its commitment to support the team as it prepares for the next America's Cup.

The Kiwis and defenders in the faster boat, Te Rehutai, won the 36th America's Cup, beating italy's Luna Rossa 7-3 in the best-of-13 series with a dominant 46-second victory this afternoon.

Prime Minister Jacinda Ardern said they had made the country proud.

"Peter Burling and his crew of skilled sailors showed what they were capable of in all conditions, highlighting the tactical brilliance and sheer hard work of everyone involved.

"Following a hard year, Team New Zealand provided such optimism and excitement. I know with all the international limitations that Covid created this wasn't the competition they expected, but they've made us so proud", Ardern said.

The minister responsible for America's Cup support, Stuart Nash, said Cabinet has agreed in principle to use the under-spend from the $136.5 million set aside in Budget 2018 to support the successful team to stay together while it planned its defence.

"It would be subject to a number of conditions, including an expectation the Cup will be defended in New Zealand," he said.

"The defence of the Cup offers a global opportunity to promote New Zealand as an innovative and successful nation, with spin-offs in areas like tourism and export deals."

Nash said while no request for support had yet been made, he anticipated it would be a similar to the $5 million that was paid after America's Cup in Bermuda in 2017.

A challenge for the 37th America's Cup has already been issued and accepted, with the start of the process beginning out on the water as soon as Team New Zealand secured the Auld Mug earlier today.

Royal New Zealand Yacht Squadron general manager Hayden Porter confirmed the club had received a new challenge when speaking to Newstalk ZB's Heather du Plessis-Allan this afternoon, but would not say where the challenge had come from.

"We have received a challenge for the 37th America's Cup. There's a lot of details to come; discussions will evolve over the next few days, weeks and months and things will happen from there ... it was all done out on the water – all details will be revealed in the next wee while," Porter said.

Unconditional support without cost benefit analysis. Nobody objects to such use of public money.

Just the Govt riding on the euphoria of public pride in winning this irrelevant, rich boys trophy again.
Given the current social and economic crisis facing the country this money would be better directed elsewhere.