Cause of death revealed in Carmen Thomas case 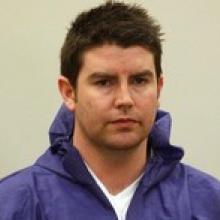 Brad Callaghan at a court appearance. Photo / Brett Phibbs
Police allege Brad Callaghan murdered his former girlfriend and mother of their child, Carmen Thomas, by hitting her numerous times on the head, a summary of the police case today says.

Callaghan, a structural engineer, was arrested last September and charged with the murder and with attempting to pervert the course of justice. He has pleaded not guilty and is due to stand trial in February.

Media were today granted access to view the Crown's written file of evidence in the High Court at Auckland.

The police summary alleges Callaghan killed Ms Thomas in her Remuera flat by striking her multiple times on the head.

During the alleged assault on the evening of June 28 last year, a neighbour heard a panicked scream and whimpering coming from inside.

The neighbour went to investigate and observed through a window that a rubbish bin and clothes horse had been knocked over.

"Shortly afterwards the defendant came out of Carmen's flat and convinced the neighbour that Carmen had vomited blood on him due to the fact that she was sick," the summary said.

Callaghan phoned an associate and arranged to meet them at the Greenlane Countdown supermarket.

"Can you please bring me three black rubbish bags and a bottle me (sic) kerosene.. keep it quiet," Callaghan is alleged to have said during the call.

The associate bought kerosene and met Callaghan outside the supermarket where the associate purchased rubbish bags and cleaning products.

Callaghan then allegedly returned to the flat and cleaned it; wiping up the blood splatters and concealing evidence in a rubbish bin.

"Over the ensuing days the accused embarked on a course of conduct to dispose of Carmen and cover up her murder. Part of the plan was to make it look like Carmen had gone down the line to Hamilton," the police case alleges.

He began sending text messages from her cellphone to make it seem like she was still alive, telling her friends that she was not feeling well and had gone "down the line" for a few days.

On June 30, Callaghan purchased a meat cleaver and a 120 litre plastic bin.

"Over the ensuing days the defendant dismembered Carmen's body into eight pieces in order to prepare it for disposal. The defendant severed Carmen's legs from her torso at the hip joint. Each leg was severed through the knee into two parts. Her arms and head were also severed from her torso," said the police.

They said Callaghan then placed the severed body parts into plastic bags and encased them in cement in paint buckets and placed her torso into the plastic bin.

On July 3 he met another associate at the boat ramp at Okahu Bay, about 5km from downtown Auckland, and told them that he had killed Ms Thomas and needed help to dispose of the body.

"The defendant subsequently made an unsuccessful attempt to dump Carmen's dismembered body at sea."

Over the following days he drove to the Waitakere Ranges in west Auckland and allegedly buried the containers in a shallow grave.

Police said that on July 7 he drove her car to Hamilton, and abandoned it there before being picked up by an associate.

Callaghan was charged with murder on September 21. He declined to make a statement to police.

On October 1 police were "directed" to the gravesite and found the body.

A post mortem established that Ms Thomas had died from multiple blows to the head with the fatal blow causing a compressed fracture of the skull.

Ms Thomas met Callaghan in England where she gave birth to their son, Jack, in 2005.

They separated shortly afterwards but maintained joint custody of the child.

Ms Thomas and Jack moved to New Zealand in 2006 so he could be closer to his father.