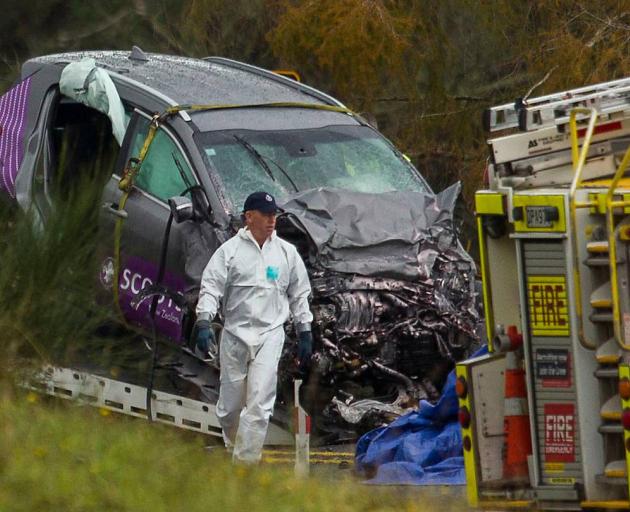 The crash scene where eight people were killed. Photo / File
It was one of New Zealand's worst road trauma tragedies, which claimed the lives of a mother, father, their five children from Tokoroa and the driver of a car coming the other way from Wellington. Now details of how the horrific crash at Atiamuri more than two years ago can be revealed. Kelly Makiha reports.


Margaret Luke had only had about four to five hours of sleep when she drove from Hastings home to Tokoroa with her six children and their father.

She almost made it, but on a slight bend, she drifted across the centreline, lost control and smashed into an oncoming car.

The driver of the vehicle coming the other way, Scouts New Zealand manager Jenny Rogers, of Wellington, also died at the scene.

The only survivor was a young boy, who was thrown from the car and found by people first on the scene on the road bleeding from his head and whimpering.

Details of the horrific crash can now be revealed after Coroner Mike Robb's findings were released to the Rotorua Daily Post.

It revealed fatigue was a factor but there was a combination of other issues that also either contributed to the crash or resulted in more deaths.

The family of eight were travelling in a seven-seater vehicle, the passengers were not wearing seatbelts, the vehicle's tyres did not meet Warrant of Fitness standards for tyre tread depth and had mismatched tyres, the road was wet, Luke was likely going too fast heading into the bend, she was on a learner's licence and had consumed cannabis the day before the crash.

Luke and Poutawa had travelled with their six children to Hastings on Friday, April 26 to visit family.

The crash scene where eight people were killed. Photo / File

Luke hadn't drunk alcohol over the weekend but on Saturday had some cannabis. She went to bed between 11pm and midnight on Saturday night but woke at 4am to find Poutawa was still up.

She began cleaning up and by 6.30am was wanting to leave to drive home. Poutawa had stayed up all night and by 7am the family left Hastings to return to Tokoroa.

Luke was driving the seven-seater with eight people in the car, was wearing gumboots - which Coroner Robb said wasn't recommended to control pedals - and was driving outside her licence conditions as she was on a learner's licence and Poutawa didn't have a full licence.

Despite being on a learner's licence, Luke had been driving for 12 to 15 years and had attempted to sit her restricted test in 2017. For reasons unknown, it didn't go ahead and the test wasn't rebooked.

It is unknown if they stopped between Hastings and where the crash happened about 10.30am on State Highway 1 at Atiamuri - a journey of about two hours and 20 minutes from Hastings.

Rodgers had travelled from Wellington to Waitomo on Saturday for work, had stayed the Saturday night in Cambridge and left on Sunday morning about 9.20am to travel to Palmerston North.

There were no eyewitnesses to the crash but a video camera on Rodgers' Kia Sportage captured circumstances leading up to the collision.

The collision happened at the end of a short straight section of road on a left-hand corner for northbound traffic.

Luke's Honda Stream was travelling northbound and could be seen on the camera footage entering the corner before starting to slide counter-clockwise with the rear of the vehicle sliding towards the centreline.

The footage showed Luke over-correcting the Honda, turning the front of the vehicle back onto the road but then pointing towards the centreline rather than straight ahead down the correct lane. The front wheels can be seen hitting the centreline before there is a violent swing of the vehicle in the opposite direction.

That violent swing led the rear of the vehicle rotating counter-clockwise and beginning to slide side-on down the road. The Honda slid into the opposing lane side on. A T-bone collision occurred with the Kia colliding head-on into the driver's side of the Honda.

Robb's finding said Rodgers had no realistic prospect of avoiding the collision.

There were no mechanical faults in either vehicle and there were no issues with the road.

Toxicology analysis revealed the presence of THC in Luke's blood, which confirmed she had consumed cannabis.

That was consistent with eyewitness accounts of Luke having had cannabis on the Saturday. There was no evidence she had smoked cannabis the morning of the crash.

Coroner Robb's finding said cannabis affected people differently but it could mean some people took longer to respond to events, had reduced ability to think clearly and to problem-solve quickly.

They can also have distorted perception, reduced ability to pay attention, fatigue and loss of co-ordination.

While Coroner Robb said he couldn't' ignore the presence of THC, the evidence pointed to consumption of a small amount on the previous day.

He said it was unlikely she would have been suffering from any significant or necessarily ongoing psychoactive effect at the time she was driving.

"I do not consider that her having consumed a small amount of cannabis the day before caused the collision. However, consumption of cannabis can subsequently contribute to fatigue. For Margaret, fatigue likely negatively impacted on her driving at the time of the collision."

Coroner Robb said Luke was likely fatigued by the time she lost control of the car because she had had only four or five hours' sleep and remaining awake after getting up at 4am before driving the long distance home.

Given Poutawa had been up all night, it was likely he was sleeping in the car and therefore Luke wasn't kept awake with conversation with her passenger.

Coroner Robb said the dangers of speed and driving while fatigued had been the subject of several media campaigns and he reiterated those dangers and warnings.

"These tragic and avoidable deaths highlighted those dangers."

Robb said those dangers were present for not only the driver but passengers also and in this situation the "precious cargo" of six children from the same family.

"For the Luke and Poutawa whānau, the consequences have been horrific."

He said the dangers extended to other innocent and responsible members of the public on the road.

"Here Jennifer Rodgers needlessly lost her life in circumstances over which she had absolutely no control. That is no less horrific for her family to have to endure."