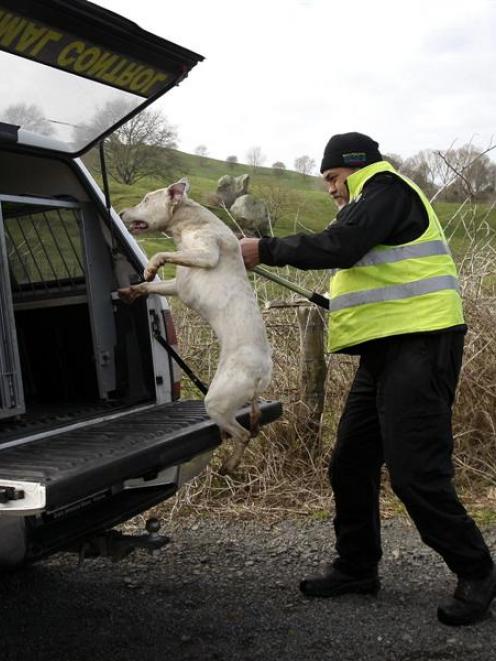 The last bitch being being put in the truck and taken away from the Hildreth Rd house by Animal Control officer Eric Teukura following the attack on jogger Margit Christensen by a pack of dogs on Monday. Photo by The New Zealand Herald.
A pack of eight pig dogs which savaged a female jogger was yesterday destroyed by Animal Control in the Waikato, and their owner charged.

Mother-of-two Margit Christensen (36) is expected to undergo several operations after dog bites left her resembling "a blob of blood".

Putaruru police yesterday arrested the owner of the dogs, Tara Tuhakaraina (29), and charged her with eight counts of owning a dog that caused injury.

Her dogs, a mongrel breed of bull terrier, ridgeback and greyhound, were believed to have run through a gate to attack Mrs Christensen, who was jogging on a rural road in Puketurua, west of Putaruru, on Monday. The attack lasted about 15 minutes.

"She was screaming with three dogs on her, trying to kick them off, when another five or so dogs came flying across and she fell to the ground."

"By the time I got there the dogs were off... Margit was basically just sitting, she looked like a big blob of blood on the side of the road," he said.

He was afraid to touch her: "Her whole body was torn to bits," he said.

"You couldn't touch her without putting your hand on a wound."

Mr Christensen said he knew the owner of the pig dogs. She had helped get the dogs off.

Mrs Christensen suffered lacerations to her scalp, arms and legs, and was airlifted to Waikato Hospital, where she underwent about nine hours of surgery. She was in a stable condition in a general ward yesterday.

The eight dogs, aged between 6 months and 2 years, were put down yesterday. The dogs' parents, Sky and Rusty, were taken to the pound as a precaution. The last of the eight to be rounded up, Number 1, fought viciously when captured.

She said she had never seen so many extensive wounds on a patient.

It was a "miracle" Mrs Christensen survived the attack.

"She was almost covered by dog marks - some were quite extensive but there was no major damage to tissue or organs."

Mrs Christensen was able to protect some of her body by curling into a fetal position.

Dr John Bonning, who was involved in the early stages of caring for Mrs Christensen, said she suffered major injuries to her skull and back, and tendon damage to her arms and legs.

He believed the dogs would have killed Mrs Christensen had they not been called off.

A neighbour said his children were wary of the dogs.

"Those dogs are bad news - they are quite intimidating, rushing to the gate when you walk past," he said.

Witnesses said she was distraught.

Another neighbour said they had found her sitting in the driveway after the attack.

"She was in a bad way. She was just sitting... near where Maggie was lying, covered in a blanket. She knew the consequences. She knew they'd be put down."

If found guilty, she could face a prison sentence of up to three years or $20,000 in fines.