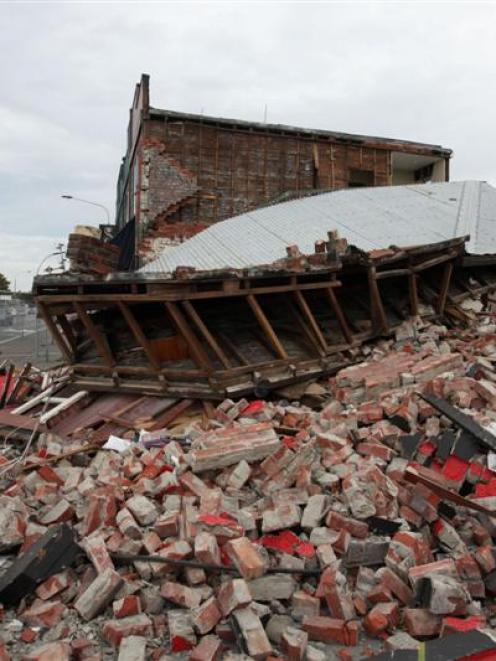 A ruined house at the corner of Ferry Road and Lancaster St. Credit:NZPA / Pam Johnson.
Four unfortunate factors combined to make Christchurch's February 22 earthquake so destructive, including ground acceleration of more than four times that measured in last week's quake off the coast of Japan.

According to GNS Science, four factors caused the intense shaking from the Port Hills fault earthquake; the energy released in the fault's rupture, the direction it was released, the "trampoline effect" between layers of sediment and the proximity of the fault to the city.

GNS Science seismologist Bill Fry said ground acceleration more than twice that of gravity in some parts of Christchurch was the strongest recorded in a New Zealand quake and up to four times greater than the maximum acceleration measured in last week's magnitude-9.0 quake 130 kilometres off northeast Japan.

The ground breaking along the fault only lasted about three seconds but the city was feeling the first waves before the rupture was over because of its speed.

Ground shaking was worse because the waves from the rupture, and the rupture, moved in the same direction. The fault was sloping down towards the southeast and so it directed much of its energy northwest across the city.

When the earthquake hit, the weaker top few metres of ground under the city "trampolined" further upwards than stronger layers lower down and separated from them.

"Think of jumping on a trampoline. If you change the rate at which you jump, and get out of synch with the trampoline, when you come down and land as the trampoline is still heading upwards, you get quite a jolt to your knees," Mr Fry said.