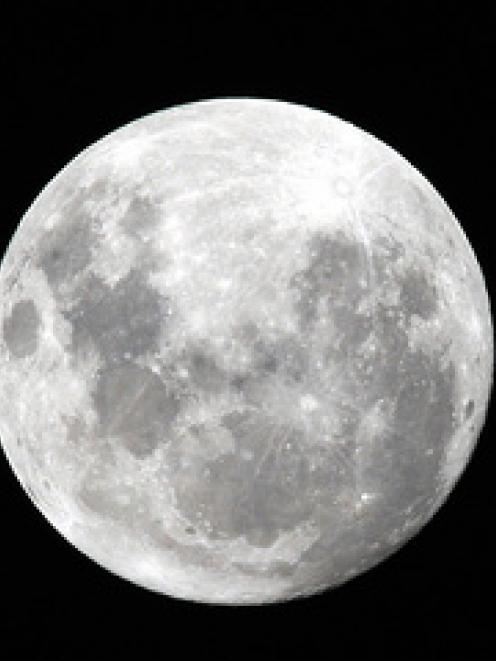 The moon will appear bigger and brighter as it's some 31 thousand miles closer than when it's farthest away, Wellington, New Zealand, Saturday, March 19, 2011.
By Sarah McDougall of NZPA

There is enough to be fearful of in Christchurch without worrying about false earthquake predictions, says an organiser of a skeptics lunch today, aiming to draw attention to the issue.

A significant number of Christchurch residents left the city this weekend after weather forecaster Ken Ring, who bases his theories on the tides and the Moon, predicted another big earthquake to hit today in Canterbury or Marlborough.

A full house of about 45 people, including geologists, teachers, health professionals, parents and politicians, attended the New Zealand Skeptics "non event" lunch at the Sign of the Kiwi tearooms in Christchurch, spokeswoman Vicki Hyde said.

"It was a very good lunch today not punctuated by any massive earthquake whatsoever, which frankly didn't surprise us."

Christchurch residents should be worried about the quality of their water, robustness of sewerage systems and safety of their broken roads, not false claims, she said.

"In times of uncertainty, I guess we need to be certain that the fears we do have are rational ones."

A horoscope in the paper had about as much predictability as Mr Ring, she said.

"But of course we have had hundreds, possibly thousands, of people who have been genuinely frightened by his pronouncements and that's the thing we felt the need to stand up for."

Ms Hyde hoped the lunch would force people to focus on Mr Ring's claim and if it lived up to its billing.

"He got this one wrong... He doesn't really deserve the kind of credibility and attention he's gained on the back of our misery in Christchurch."

Ms Hyde, who lived in Redcliffs one of the harder hit suburbs, said her daughter had been abused on facebook for questioning Mr Ring's claims.

The Skeptics selected the heritage building for the lunch "to make a point" because of its seemingly vulnerable location on the top of the Port Hills not far from the epicentre of February 22's 6.3 earthquake, Ms Hyde said.

"We were looking for a high rise outlet, but of course they're all inside the cordon."

Environment Minister and geotechnical engineer Nick Smith, who attended the lunch, said it was "reckless and irresponsible" for people like Mr Ring to speculate on the timing of future major earthquakes with no scientific basis.

"Cantabrians have been through enough trauma without charlatans preying on people's natural fears," he said.

"I can appreciate that people are frustrated that scientists and engineers cannot give black and white assurances on if and when another major quake may occur, but false claims only make the situation worse."

The best assurance science could offer was that another large earthquake became less likely as each week passed, Dr Smith said.

"The advice from GNS is the risk of a quake greater than magnitude six in Christchurch is now similar to that in Wellington and in matter of months will be less."

"We can continue to reduce the risks and save more lives but, as the tragic events in Japan have shown, we can never eliminate all loss of life from major earthquakes," he said.

"Scaremongering" from people like Mr Ring played no part in reducing that risk, instead the key was to invest in scientists and engineers to improve knowledge of earthquakes and buildings so they could better withstand them, Dr Smith said.