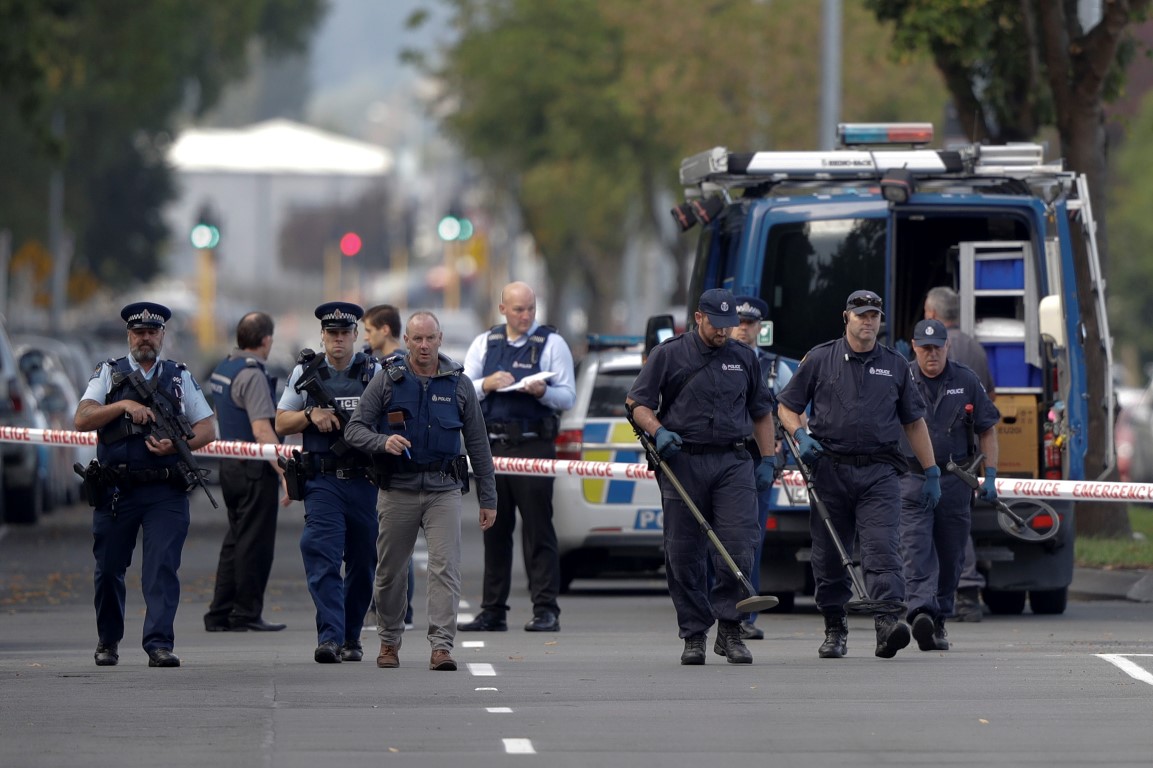 Police officers search the area near the Masjid Al Noor mosque in Christchurch following the shooting. Photo: AP
The police officers who dragged an alleged gunman from a car following a shooting at two Christchurch mosques came straight from a training session on how to deal with armed offenders.

The New Zealand Herald has exclusive details about how the officers, after hearing there was an active shooter on the loose in the city, took to the streets to find him - and stop him.

The officers, whom the Herald has agreed not to name, are both based in smaller towns out of Christchurch.

The training was held on a disused floor of the hospital and was around room clearance and dealing with offenders in armed incidents.

"They were actually training when the call came through that there was an active armed offender in Christchurch," Stills told the Herald.

"They had their work vehicles there with them with firearms in them.

"They operationalised themselves and got into one car, they decided to skirt the city, they thought that's what the offender would do - rather than drive through the CBD.

"They were driving on Brougham Street because they thought if he'd just been to Linwood [the second mosque attacked] that's a route he might take."

"They saw someone fitting the description of the offender coming towards them," Stills said.

"The car was weaving in and out of lanes with its hazard lights on.

"They confirmed the rego, that it was the right car, and did a U-turn."

Stills said the officers have more than 40 years of policing between them and had the experience to handle the situation.

"They were trying to catch up with him, they were discussing tactics - did they want to pursue him?"

Stills said the officers weighed up a pursuit, where the gunman could have got away and "unleashed" on more innocent members of the public.

They also had to consider whether pursuing him would cause a crash which could also be fatal and involve innocent road users. 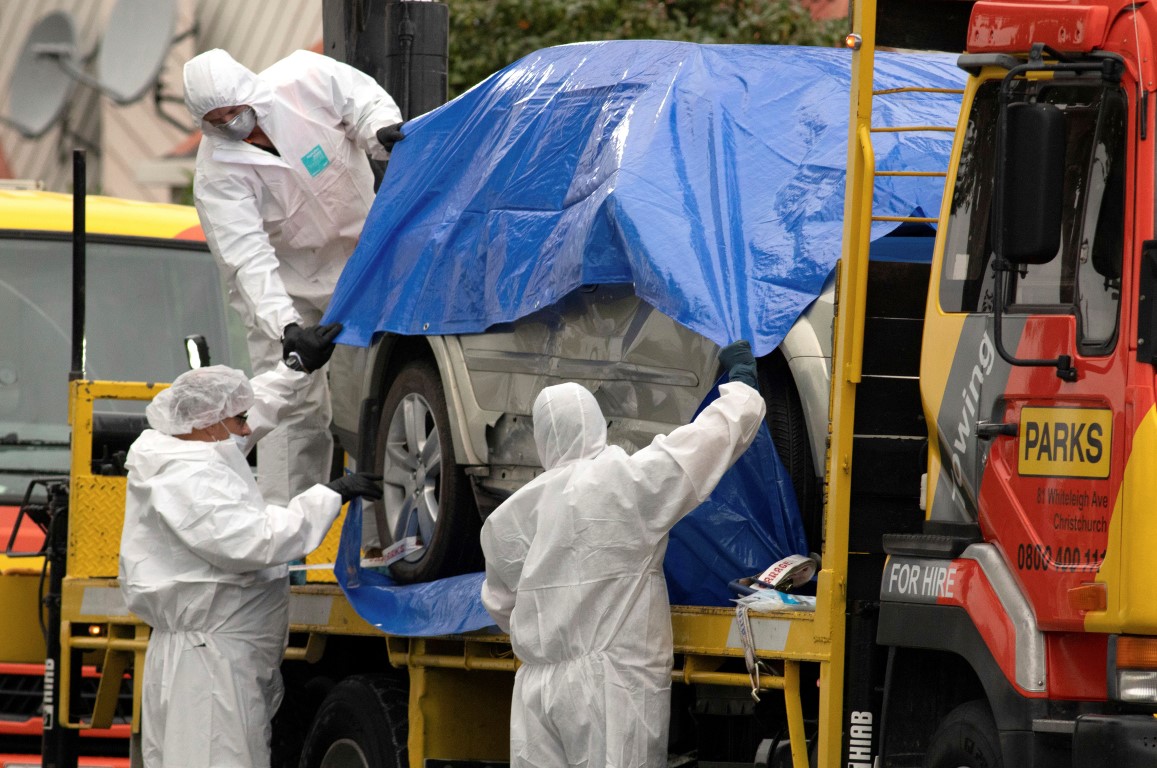 A car allegedly used by the suspect in the Christchurch mosque shootings is covered by police forensic staff as they prepare to remove it from the street after it was rammed by officers. Photo: AP
They rammed the gunman's car on the driver's side and footage supplied to the Herald shows the officers dragging him out of the passenger side.

Stills said one officer saw "high risk" items in the back of the car and ran back round to the police car to radio the information in and warn other police.

He believed those items would put his colleagues in danger and wanted to tell them to stay back.

While doing that he lost sight of the alleged gunman and was worried for his colleague so he abandoned the plan and went back to the passenger side.

"He yelled at members of the public to get back," said Stills.

"The car posed a danger."

Once the alleged gunman was contained both officers used the radio to alert other police to the situation.

Stills has heard those communications - as has Police Commissioner Mike Bush.

Bush said the alleged gunman did not give himself up and was "non compliant".

"I was surprised how calm and collected they were," he said.

"They wouldn't have been scared, we practice for this stuff - to be honest, it was lucky two officers with that amount of service and experience were there.

"One of the officers phoned me straight after to advise me that they'd damaged a car."

Stills said it was the second car from his patch damaged in a week and he'd previously told staff not to wreck any others as they were already short.

He wasn't worried though when he heard what his staff had accomplished.

He commended them for their work and hoped that one day they could tell their stories in their own words.

"You could police for 100 years and not get an apprehension anywhere near that good.

At this stage the officers are not able to comment on the shooting or apprehending the suspect as the investigation is ongoing.

Footage of the arrest has been widely shared on social media and the officers have been hailed as heroes by many including Police Commissioner Bush.

He said without their brave actions, it was likely more people would have been killed.

Stills has spoken to both officers at length about their actions.

The men said they were not - and did not want to be described as - heroes.

"They were just doing their jobs, what they are trained to do," Stills said.

Both are taking some time off and one has travelled overseas on a planned holiday.

Police Association president Chris Cahill told the Herald he had spoken "in depth" to one of the officers and had been in contact with the other.

He said he - and the rest of the police - were extremely proud of the pair.

Police around the world had also contacted Cahill to ask him to pass on their messages of pride, support and commendation.

"They're pretty humble guys, certainly 'hero' is not a word you'll hear either of them use," Cahill said.

"They made a decision, and they acted and they got a result."

Cahill said the officers maintain they were just doing their job and "any cop would have done it".

The officers did not want any public fanfare or attention.

"They are the sort of people who want to get on with the job," said Cahill.

"But they understand the response."

Cahill spent much of his day visiting police working as scene guards around the city - many of them young officers brought into Christchurch from around New Zealand.

One of them graduated from Police College last Thursday.

"Her first day on the job was Friday," he said.

"So today is her third day out of college.

"I've just been getting around reassuring them, seeing how they are and letting them know that what they are doing is really important and also the support that is there for them."

He said police across the district were coping well - particularly those tasked with identifying victims.

All bodies have now been removed from the mosque - and the second mosque in Linwood where the gunman struck next.

"That team did an amazing job to get those bodies out as quickly as they did," he said.

"This is something they never thought they would encounter and hopefully never will again.

"It's an in-depth scene examination, it's tough - but they understand that if they do their job properly, that's the best thing they can do for the victims.

Man charged with murder of woman in Kawerau 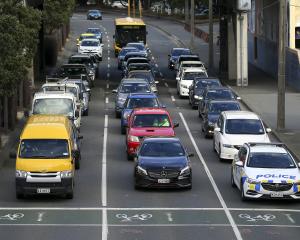 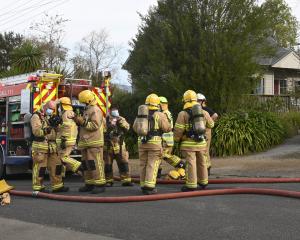 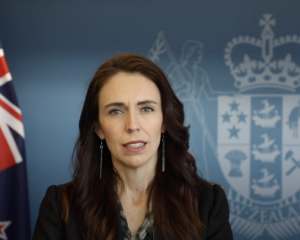