Historic buildings to be demolished 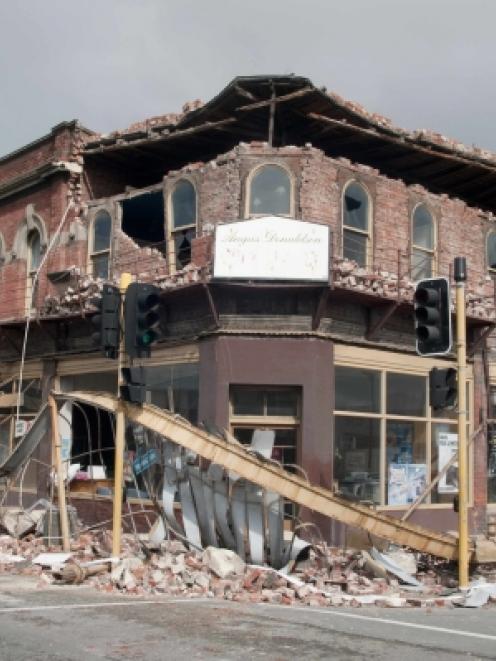 Damage to the commercial heart of Sydenham, Colombo Street South where buildings have yet to be assessed after the earthquake, Photo by NZPA.
Christchurch Cathedral is showing signs of new cracks and two other historic buildings in central Christchurch will have to be demolished following a series of heavy aftershocks.

The Cathedral, closed since Saturday's 7.1 earthquake, was initally declared safe, but Stuff is now reporting engineers are checking it after fresh cracks emerged.

Manchester Courts, a seven-storey building on the corner of Hereford and Manchester Streets, is a category one historic place built in 1906 that housed offices until Saturday's earthquake.

It was formerly known as the New Zealand Express Company Building, and at the time of its construction it was the tallest building in Christchurch.

According to the New Zealand Historic Places Trust register, the building "is significant as one of the earliest attempts at the Chicago skyscraper style in New Zealand".

Cecil House, a two-storey building contructed in 1877 on the corner of St Asaph and Manchester Sts, now houses the Country Theme furniture store.

The council was unable to provide specific times for the demolition of the buildings.

A chunk of central Christchurch reopened to businesses and the public this morning, but authorities have warned people to be cautious as aftershocks from Saturday's devastating earthquake continue.

Civil Defence warned that the area could be hit by another big aftershock after residents were kept awake overnight by a series of strong aftershocks.

The emergency management centre told police to reduce the cordons surrounding the Christchurch central business district from 8am.

But the area remained like a ghost town, with no shops open and workers going in only to help with the clean-up.

Entry to the area is through checkpoints at Colombo and Lichfield St and Madras and Cashel St intersections. Staff at these checkpoints are keeping a record of all people who enter the restricted areas.

"This is so that we know who is in these areas at all times," said Inspector John Price.

"With the continuing aftershocks there is still a risk to those entering the cordoned area and as such we need to know who is in there should we need to evacuate that area.

"We ask that people continue to be vigilant and put safety first when entering buildings or the cordoned area."

The aftershocks, ranging from magnitude 3.1 to 5.4, that shook the city overnight damaged the welfare centre at Burnside High School which was closed this morning. People were being relocated to the main welfare centre at Addington Raceway.

Rail services were again disrupted this morning following the aftershocks.

KiwiRail is taking a precautionary approach within the earthquake zone and staff are inspecting track and bridges.

Rail services are expected to be restored this afternoon.

A "road bridging" service at Rangiora continues to ensure freight off trains coming from the North Island can be delivered into Christchurch.

Overnight there was an increase in the number of people staying in the welfare centres, with Linwood hosting 105 people, Addington another 145 and 71 people at the Burnside welfare centre.

The aftershocks during the night also caused new cracks to open in the domestic terminal at Christchurch Airport and travellers on domestic flights were leaving from the international terminal.

Owner of Avon City Backpackers, Irinka Britnell, said the aftershocks had rattled her.

Ms Britnell, who lives with her husband in Avonside, said there was a confused feeling about the aftershocks because she was never sure if she should get up and dive for a doorway or simply wait for the shaking to stop.

"We sat up in bed and hung on to each other -- it was pretty much like The Exorcist," she said.

"Now that everybody's experienced the damage of the first one, everybody's on tenterhooks."

Christchurch City Council rescue manager John Buchan said that relaxing much of the inner city cordon was a major step toward freeing access to the city.

There would be full access for building owners and the public in this area, except where damaged and unsafe buildings had been taped off.

"We do, however, urge that people exercise caution as aftershocks continue," Mr Buchan said.

The council said its staff, the Fire Service and Urban Search and Rescue had dealt with thousands of calls about houses and assisted homeowners with securing their houses, removing chimneys and ensuring access to properties.

All 678 buildings in the CBD were inspected and buildings were affixed with either a green, yellow or red placard. Green means safe, yellow means limited access and red means the building is unsafe. Sixty nine percent of buildings have a green placard, 26 percent a yellow and 5 percent a red.

A street in suburban Bexley was evacuated yesterday because the sections were covered in deep layers of silt.

There were health concerns too, with two families in a welfare centre reported to have contracted gastroenteritis, though it was not known whether they had caught the stomach bug before the quake or after it.

But health authorities reinforced the message that people should continue to boil drinking water for at least three minutes.

Prime Minister John Key, who has cancelled an official visit to Europe due to start later this week, will travel to Christchurch this afternoon to meet the region's mayors and inspect damage.

He said yesterday the Government was paying $5 million in to the mayoral relief fund, to help those suffering hardship. The Warehouse, ANZ Bank, BNZ, Westpac, Fonterra and Fletcher Building promised $1m each towards flood relief efforts.