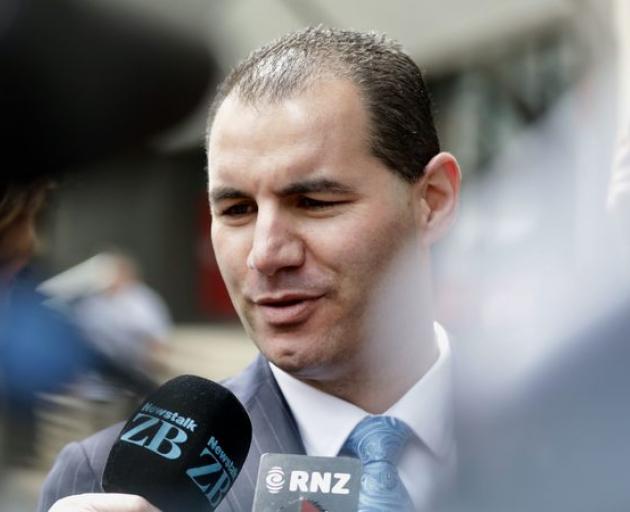 Jami-Lee Ross speaking to media outside the Victoria Street police station in Wellington last week. Photo: RNZ
Jami-Lee Ross has been sectioned to an Auckland mental health facility, following a tumultuous week in which he traded insults and allegations with the National Party and came clean to his wife about extra-marital affairs.

Mr Ross was taken in by police this afternoon, and a source close to Ross told the Herald  that he was "not in good shape" and "had been sectioned ... people who go willingly aren't sectioned".

Under the Mental Health Act, a person can be sectioned to a safe place against their will and given treatment if their safety is considered at risk.

It follows a week of unprecedented political turbulence in which Ross, a former member of the National caucus' senior team, quit the National Party, was expelled from caucus, traded insults and accusations with Simon Bridges and Paula Bennett, and admitted to extra-marital affairs that have rocked his marriage to Lucy Schwaner, with whom he has two children.

It is understood the National Party is continuing to offer Mr Ross support, though it is unclear it if was involved in Ross' admission to the facility.

"Over the past several weeks the National Party has taken seriously the mental health concerns raised by Mr Ross and the medical professionals he has been involved with," a spokesperson for the party said.

"That has included seeking advice from medical professionals and involving police wherever necessary to ensure support is made available to Mr Ross."

But the source told the Herald that the National Party was warned about pushing Mr Ross too far on Monday, when Mr Bridges and Mrs Bennett met with Mr Ross about the PwC inquiry into Mr Bridges' leaked travel expenses.

Concerns were raised about his mental health three weeks ago, when Mr Ross took leave from Parliament for "personal health issues" and later said he had a mental breakdown over being accused of inappropriate behaviour towards women.

Mr Ross's doctors were in contact with Mr Bridges and Mrs Bennett and, the source said, "were told if any more pressure or stress was headed his way, there was a real likelihood of this incident [being sectioned] occurring".

"Two weeks later, when they confronted him about the report of the leak, the medical advice was reiterated. And they said they were going to release the information in half an hour."

The National Party has been approached to further comment.

In the weeks following Mr Ross's leave but before this week, it is understood that Mr Ross's doctors told the National leadership team that he was doing better and could return to work.

This week, as Mr Ross fronted media, he repeatedly said that he was healthy, even after six women spoke to Newsroom about what they called bullying and intimidating behaviour by him.

Mr Ross disagreed with the way the women portrayed him in the media, but admitted to extra-marital affairs and said he had apologised to his wife.

While it was unfortunate to hear of Mr Ross's mental health issues, he hoped this would be a chance for "deescalation, and focus on looking after themselves".

Mr Farrar said that the women speaking out and accusing Mr Ross of intimidating and bullying behaviour would have exasperated an already difficult situation.

"But also during the week, you think you have to strike back and defend yourself, and only in the weekend, as you come down from that, do you think about the terrible personal cost.

"Let's worry about Jami-Lee's health. There are obviously still issues to be resolved, but not in the next days, or weeks even. That doesn't mean good outcomes for all those involved in the medium term, but it's an opportunity for things to calm down."

Mr Bridges and Mrs Bennett have both spoken about Mr Ross's mental health in the past week, but in cautionary tones.

Mr Farrar said this was a very fine line to walk.

"Some people use mental health as a stigma, so for politicians it's challenging to express concern for someone's mental health and not come across as denigrating them as crazy. That's why they have expressed concerns, but in a restrained way because they haven't wanted it to be seen as an attack."

Mr Ross, however, did see it as an attack and pushed back, saying that neither Mr Bridges nor Mrs Bennett should be raising his mental health issues because his doctor had called them to tell them he was fine.

Mr Ross's leave from Parliament at the start of the month followed a text message concerned about the mental health of the person who leaked Mr Bridges' travel expenses. It led to speculation that Mr Ross was the leaker, which he denies, though he admitted to leaking details of the text message to media.

An inquiry by PwC, ordered by Mr Bridges and independently reviewed by John Billington, QC, found that Mr Ross was likely the leaker, but was inconclusive.