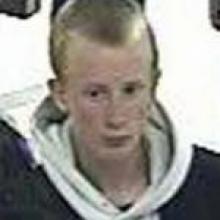 Shaun Finnerty
The body found in a Christchurch park on Wednesday is that of Dunedin boy Shaun Martin Finnerty (16), who ran away from a Child, Youth and Family home in Christchurch on Monday.

Police investigating his death are interviewing four men he was seen with on the day he was believed to have died.

Investigation head Detective Inspector Greg Williams, of Christchurch, said that ‘‘as a result of his behaviour'' and in consultation with Child, Youth and Family (CYF), police had placed the teen in the CYF family home in the Christchurch suburb of Richmond on Sunday after he had run away on Friday from the home of relatives, where he had been living for about two months.

Shaun's body was discovered in Auburn Reserve, near Church Corner in Riccarton, early on Wednesday, after an anonymous person called an ambulance from a nearby telephone booth at 5.47am.

The police investigation was now focused on Shaun's movements before his death, the anonymous caller and several groups of people - one group seen with Shaun in Riccarton Mall on Tuesday morning and another group seen with him later that day in the park where his body was found, Det Insp Williams said.

Asked if the teen had been troublesome at school, he said Shaun had ‘‘made his presence felt''. Shaun had come to OBHS from Halswell School, in Christchurch, the year before and his younger brother is a year 9 pupil at OBHS this year.

Family spokesman Graeme Finnerty said his nephew was an average child ‘‘who had his moments''. Arrangements for the funeral had yet to be made.

Police were speaking with a group of four Polynesian or Maori males who had been with Shaun in Riccarton Mall about 10.30am on Tuesday. Some of the youths were trespassed from the mall.

Forensic specialists were expected to be at the scene for a few more days. A postmortem was completed on Thursday morning and police were awaiting the results of toxicology tests.

‘‘All I can say at this time is that Shaun has been seriously assaulted and this is likely to be a contributing factor in the cause of his death,'' Det Insp Williams said.

CYF South Island regional director John Henderson said Shaun was placed at the home after care arrangements broke down at the weekend.

Shaun failed to return to the CYF family home on Monday night. He was due back at 7pm and he was reported missing.