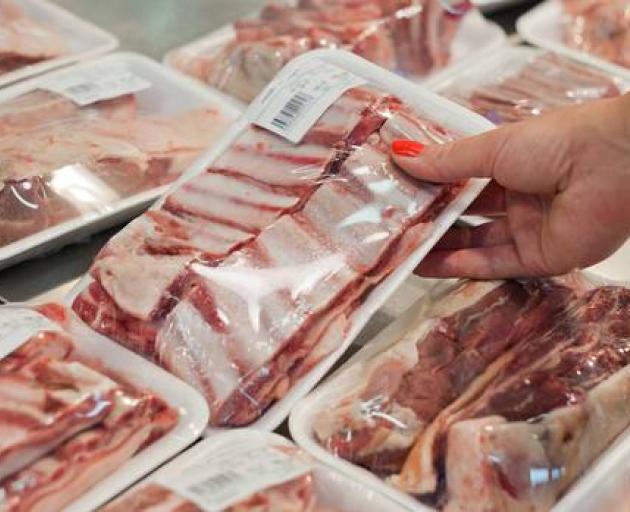 The meat industry says vegans, who are putting stickers on meat in supermarkets to deter people from buying them, are acting in a disturbing and illegal way.

The 'anti-meat' stickers have been found on packaging in some supermarkets across New Zealand.

A briefing from Foodstuffs North Island seen by RNZ says more stores are being targeted by vegan activist groups - and is asking stores to increase security.

It says any products found with a sticker on them should be taken from the fridge, and isolated.

A Countdown spokesperson said they were aware of the sticker protest happening in a "couple" of its stores - and that the supermarket does not condone anyone tampering with food.

"Very simply what they are doing is illegal and they're interfering in the lives of people going about their lawful everyday work and life.

"It just disturbs me that people like this think that they can come in and disrupt a lawful business in the manner that they do."

The products that have the labels stuck to them were considered contaminated, and had to be thrown out, he said.

He said the sticker protests had come from overseas, and were not widespread in New Zealand.

However, activist Deno Stock said they had people working across the country, putting stickers on meat products in supermarkets. He wasn't sure how many had been targeted but had personally been into about seven or eight stores.

The stickers were also being stuck to public places outdoors. He said it was to raise awareness that the meat in supermarkets was once an animal, that did not want to die.

He said no-one was damaging any products, and the stickers were quite easily peeled off.

Mr Slater said at this stage there was no risk of financial losses to meat farmers, as the activity was happening on a very small scale.

Vegan Society of NZ spokesperson Claire Insley said the organisation sympathised with the activists, but wouldn't suggest its own members take part in the practice.

"We see it more as activism and spreading awareness rather than attempting to cause harm or being vandalistic."

There were some fears within the vegan community that such activism could cause more harm than good, Ms Insley said.

"But also there's a lot of people very passionate out there who think this is a great way to provide awareness and information to people."

Ms Insley said she was seeing an increase in vegan activism in New Zealand.

"I've been involved in working for animals in New Zealand for over 35 years and we've seen a huge increase in the last five years or so. A lot of young people are coming through that really want to take action for animals - and a lot of people deciding not to eat animals to become vegan or vegetarian."

However, he said the sticker protests were small-scale, and just one part of the movement.

"They're really designed to get people thinking and start talking about the journey of the animal from being a live animal to being an animal in a meat packet."

Mr Kriek said SAFE also had sympathy for the activists, but would not be involved in such action.

Can we put anti vegan stickers on vegans?, after all plants have feelings and don't want to die either.