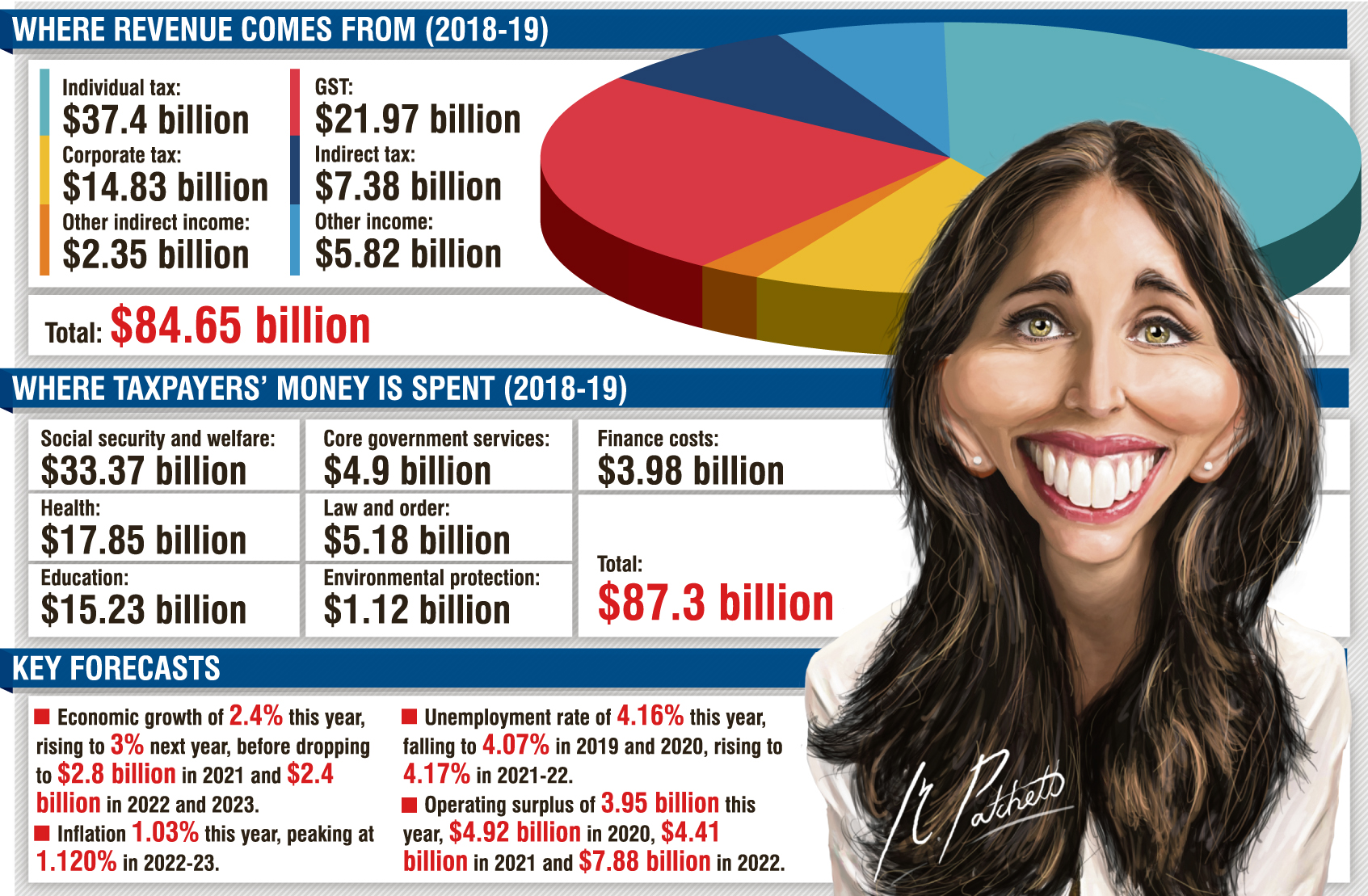 This may have been the Wellbeing Budget, but Budget 2019's bottom-line numbers show Finance Minister Grant Robertson has not taken his eye off the nation's wealth.

While Mr Robertson increased the annual operating allowance from $2.4billion to $3.8billion, as well as adding a further $1.7billion capital allowance for future Budgets, the books are projected to remain in the black for the next few years and Labour's self-imposed Budget responsibility rules adhered to.

"The state of our financial and physical capital is broadly strong,'' Mr Robertson said.

"New Zealand has relatively high material living standards and the economy is forecast to grow at 2.6% on average over the next five years.''

While accepting that rate was a slowdown from recent years, Mr Robertson said it showed New Zealand was in a good position compared with other Western economies, especially as inflation and unemployment were expected to remain low.

The Government has placed great store in yesterday's financial statements being the first "Wellbeing Budget''.

It certainly looked different, the design of the main briefing document more akin to a corporate annual report than the usual staid set of tables and projections.

In his Budget speech, in keeping with this year's theme, Mr Robertson broke from tradition and delivered a "wellbeing outlook'' at the point where the Finance Minister would normally set out the relevant economic statistics.

"My ambition is that from now on, at every Budget, New Zealanders will be able to clearly see the direction their country is travelling in and how the government of the day plans to influence that direction with the investments it makes.''

Mr Robertson said while New Zealanders were generally healthy and well-educated with increasing life expectancy, the wellbeing approach had highlighted the Government needed to focus on the environment, mental health, child poverty, and disparities between Maori and Pacific peoples and other ethnic groups.

"We do not claim perfection in this first Wellbeing Budget, and we will not fix everything in one go,'' Mr Robertson said.

"This is just the start of a programme of change.''

Mr Robertson said the Government did not claim perfection in the first attempt at a wellbeing Budget, "but we do believe that this Budget represents a significant step forward.''

National finance spokeswoman Amy Adams claimed there were few changes, and the Government's core economic plan was subsidies for KiwiRail and little else.

"Today's Budget shows the Government will increase net core Crown debt by another $5billion by 2023 and the Government has left itself no wriggle room on its fiscal responsibility rules,'' Mrs Adams said.

"As the economy continues to slow, the Government is likely to break its self-imposed targets''.

Mrs Adams said projections showed the Government would be perilously close to its debt target by 2022.

"If the Treasury's growth forecasts prove too optimistic, as appears likely, the Government will have no choice but to cut spending, increase taxes or break its promise to New Zealanders.''

BusinessNZ said the Budget contained some spending which would be positive for the economy, but chief executive Kirk Hope said if tax revenue fell below expectations the anticipated surpluses might not happen.

"The relatively robust figures seen in today's Budget are dependent on the economy continuing to deliver growth so that tax rates can finance the Government's ambitious expenditure programme.

"The trick will be to ensure the economy keeps growing sufficiently to ensure promised funding can be delivered to critical areas in a timely way while hoping to reduce debt.''

The Council of Trade Unions welcomed the largest new spending in more than 10 years, but said it would take more than a single Budget to ensuring wellbeing.

"The Government must review its Budget Responsibility Rules to ensure the funding is available to realise the full potential of a wellbeing Budget.''