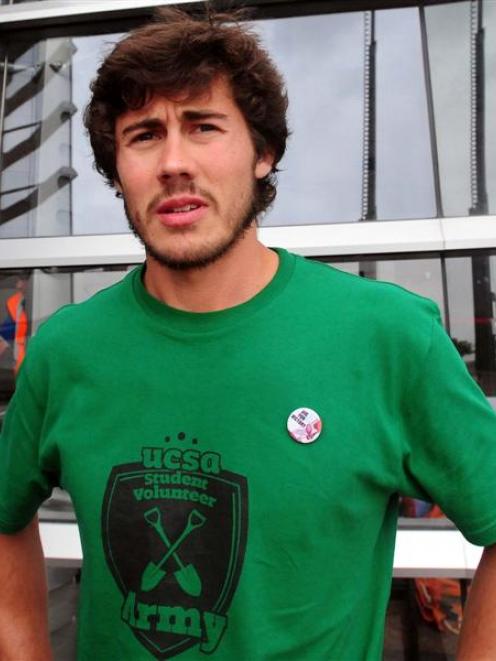 Louis Brown has a big job on his hands. Photos by Craig Baxter.
Louis Brown never thought he would speak in military terms.

But when you find yourself mobilising and manoeuvreing an 18,000-strong volunteer army across a large earthquake-damaged city for six days straight and counting, it is about the only kind of talk that works.

The volunteers are mainly students - hence the title Student Volunteer Army - but people from all walks of life have turned up every day since the the quake struck.

Requests for help from earthquake-affected residents, referrals from agencies such as Civil Defence and the Christchurch City Council, as well as offers of assistance, are registered online.

From there, requests and offers are matched. 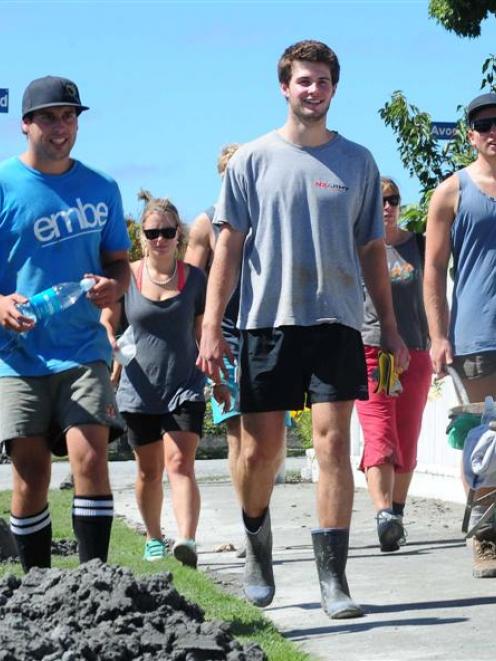 Members of the the Student Volunteer Army in Christchurch, Dunedin students (from left) Toby Holborow, Hannah Craig, David Gawith (partially obscured), Nic Blumsky-Gibbs, Hannah's mother Katherine Craig, of Christchurch, and David Owen get back to work after a lunch break in Dallington yesterday.
A team of 60 organisers are instructed via text on where to go and what to do, and they in turn text various teams of people to do jobs.

Mr Brown, a former Dunedin man, is the head organiser of the army and the chief executive of the Te Wai Pounamu foundation, a charity that aims to inspire young people to volunteer and lead social action.

He was in his central city office when the earthquake struck. As he left the central city he stopped to give CPR to two people.

One died, one lived.

He has had only had a few hours' sleep since then, but says everyone is sleep-deprived.

"That is just how it is, but we'll need to stay happy so we can provide a positive atmosphere and keep people energised."

The size of the response to the movement was more than he ever would have expected or imagined, Mr Brown said.

It was now the most effective way for people in the city to request or receive help, and it was being deluged with requests.

"What you can see out there, that's only the tip of the iceberg. The mood has gone from panic to, really, `we're in this for a long time' and we really have to make optimum use of the time we have these volunteers willing and able."

Although the volunteer army was mainly students, people from all walks of life were joining now.

And the thousands of people tucking into donated lunches at an eastern city park yesterday was testament to the community spirit that has increasingly pervaded Christchurch since Tuesday.

The food was donated by local business and ordinary people as far away as Dunedin.

That so many people of all ages and backgrounds had given up their time and come to help the student army dig and scrape roads and clear properties was a testament to an awesome human spirit, Dunedin MP Metiria Turei, who joined the shovelers working to clear the badly affected suburb of Dallington, said.

"And this is stuff [liquefaction] is nasty. It's stinky, it's heavy, it's a foot deep in some places. It's just really unpleasant."

While most volunteers appeared to be other Christchurch residents, some people from further afield had turned up.

University of Otago student Toby Holborow said he and his friends had family and other friends in Christchurch so they scraped together as many shovels and wheelbarrows as they could manage and travelled north to join the army for a few days because it was something useful they could do.

"We weren't doing anything better in Dunedin."