Director-General of Health Dr Ashley Bloomfield has shared a video urging Queenstown residents to do their bit and get a Covid-19 test, as authorities try to rule out the possibility of undetected community transmission in the resort.

Dr Bloomfield shared the video afternoon after it was earlier revealed by the Ministry of Health there were two new Covid-19 cases in managed isolation.

A pop-up testing site is being set up at Pak 'n' Save carpark in Frankton tomorrow from 9am – 5pm.

"I'm strongly encouraging you, if you have symptoms, or even if you don't have symptoms to go to the Pak 'n' Save tomorrow ... to have a test.

"Please do your bit, go and get a swab tomorrow," Dr Bloomfield said in the video.

The Ministry earlier said testing would help confirm that there is no community transmission in the region, which was linked to the traveller who arrived in South Korea and tested positive for Covid-19.

This testing was available for both symptomatic and non-symptomatic people.

WellSouth medical director Dr Stephen Graham said people should get the test, which is free, whether they had Covid-19 symptoms or not.

"We want to make certain there is no community transmission of the virus. 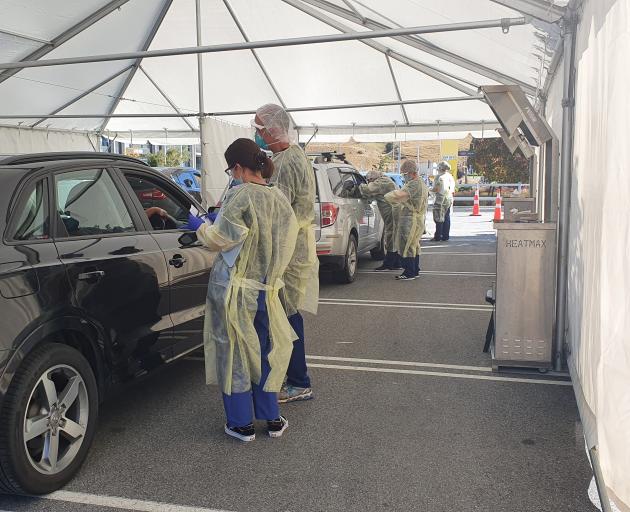 "Getting as many residents tested as we can will help us confirm we continue to be Covid-free."

Self-isolation would not be required after having the test, he said.

WellSouth chief executive Andrew Swanson-Dobbs said it was a small effort that could have a big impact.

"People in the southern region have done an incredible job helping New Zealand to get to Alert Level 1 and we can’t be complacent now."

"... One only has to look at the situation across the Tasman to realise how quickly the virus can spread if allowed to do so."

He encouraged as many people as possible to get a test and asked employers to give their staff the opportunity to visit during working hours, if needed.

The 22-year-old man who tested positive for Covid-19 in South Korea following his visit to New Zealand was in Queenstown between July 1 and July 4. Health officials say anyone who was in Queenstown at that time should get tested.

Close contacts of the man are being followed up by contact tracers and staff working at local businesses at the time the traveller visited them are being contacted by Public Health.

Southern District Health Board medical officer of health Susan Jack said the incident was a reminder to be vigilant.

"Please, take a few minutes and do your part. Get tested."

The Ministry of Health said today's the first case is "a male teenager who arrived in New Zealand from the USA on July 29".

"He tested positive for Covid-19 as part of routine testing around day 3 of his stay in managed isolation at the Sudima Hotel in Auckland, and has since been transferred to the quarantine facility," they said in a statement.

"The second case is a man in his 20s who arrived in New Zealand from Switzerland via Amsterdam and Seoul on July 20.

"He has been staying at the Sudima Hotel in Christchurch and tested negative around day 3 of his stay, then tested positive at his second routine test."

The Ministry of Health say this case again emphasises the importance of testing returnees in managed isolation twice before they are able to leave the facility.

There are 27 active Covid-19 cases in managed isolation and quarantine facilities. New Zealand's total number of confirmed cases of Covid-19 is 1217.

Director-General of Health Dr Ashley Bloomfield said New Zealanders needed to continue to be vigilant against the threat of Covid-19 and testing rates need to increase across the country.

“We have seen how quickly infection can spread within communities, cities, and states overseas. There is still a pandemic raging around the globe and while our strict border controls form our first line of defence from the virus, we need to be sure it has not crept undetected into our communities.”

The results from a recent survey of GPs showed half of the 800 GPs surveyed had seen patients who declined a Covid test and that the proportion of patients that declined was on average 25%.

Dr Bloomfield encouraged all people who are offered a test to have it done.

“To ensure that if there is a case out there it is detected prior to it spreading, patients must present to a care provider, be offered a test, and accept that test.”

Anyone who has symptoms consistent with Covid-19 should seek advice from their GP or Healthline on getting a test, and anyone offered a test should take it up.

Yesterday, there were three new cases of the virus in managed isolation - one child and two women.

The child was linked to a previously reported case and arrived in New Zealand on July 14 from Pakistan, via Dubai.

One woman, in her 30s, arrived in New Zealand on July 28 from Los Angeles.

She's been staying at the Rydges in Auckland and tested positive for Covid-19 as part of routine testing around day three of her stay in managed isolation.

The second woman was in her 40s and arrived in New Zealand on August 1 from Manila, via Hong Kong.

The three people were at the Auckland quarantine facility, the ministry said.

As of yesterday, there were 1215 confirmed cases of Covid-19 in New Zealand. It had been 93 days since the last case acquired locally from an unknown source. There was no one in New Zealand receiving hospital-level care for Covid-19.

The three people were at the Auckland quarantine facility, the ministry said.

As of yesterday, there were 1215 confirmed cases of Covid-19 in New Zealand. It had been 93 days since the last case acquired locally from an unknown source. There was no one in New Zealand receiving hospital-level care for Covid-19.

The ministry said laboratories on Saturday completed 2401 tests, "of which 2023 swabs were taken in the community, and 378 were taken in managed isolation and quarantine facilities".

This brought the total number of tests completed to date to 470,469.

Melbourne back into lockdown

Melbourne residents meanwhile have returned to a gut-wrenching lockdown, with the state's opposition leader Michael O'Brien lashing out at the new restrictions and declaring: "Victorians don't deserve this".

Victorian Premier Dan Andrews announced stage-four restrictions - and a state of disaster - for Melbourne on Sunday afternoon, including a curfew from 8pm (10pm NZT) to 5am (7am NZT) for anyone living in the metropolitan area.

Andrews said Sunday "is by far the hardest day" as he announced 671 new cases of Covid-19 and seven deaths along with new unprecedented stage four restrictions.

O'Brien said: "In declaring a State of Disaster, Premier Daniel Andrews has conceded that his government has lost control of Covid-19 in this state.

"The failings of the Labor Government in hotel quarantine, in testing and in contact tracing have led to millions of Victorians being subjected to the harshest restrictions in our history.

"Curfews. Businesses that will be closed. Limits on daily exercise. Limits on shopping. Limits on moving five kilometres from your home. Unprecedented in their nature and their intrusion into the lives of Victorians."