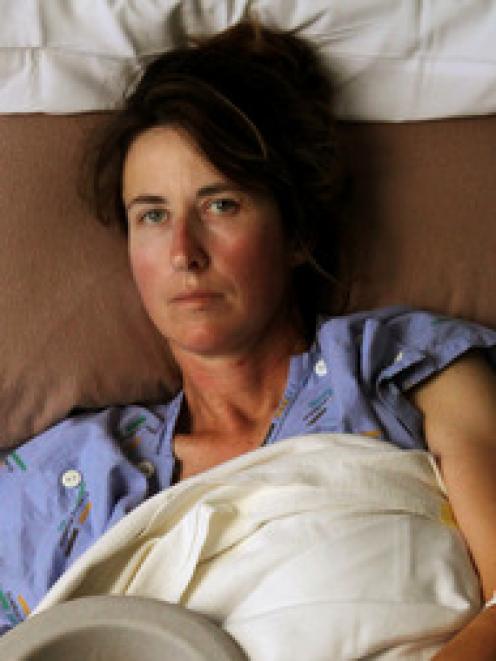 Amanda Austrin, pictured in Tauranga Hospital, still vomits every day - 18 months after her holiday. Photo / Alan Gibson
As soon as she took a bite of the fish caught and prepared for her by some Fijian locals, Amanda Austrin knew something was wrong.

The coral trout, cooked on a white sand beach in banana leaves over an open fire, was a kind gesture by a couple of villagers on the Coral Coast after an unsuccessful fishing jaunt with her friends that day.

But it tasted bitter and the 41-year-old environmental scientist spat it out, noticing some of its gut smeared over the white flesh.

A few hours later her face, body and limbs began to tingle and go numb.

She remembers shivering in her hotel bed wrapped in the winter clothes she had worn for the trip from Whakatane to Auckland to catch her flight to the island but never thought she'd need as the mercury outside topped 30C.

Vomiting uncontrollably and suffering from diarrhoea, she felt as if she was dying.

She returned home a couple of days later when a GP thought she had little more than traveller's diarrhoea and told her to drink fluids and keep her food intake up.

Within days she was in hospital, even more nauseous and with more intense bursts of pain with hot and cold temperature reversals that made touching metal objects feel like they were burning cold.

"I had a hot cup of coffee given to me that felt cold but it was burning my hand," she said.

Baffled doctors scoured the internet to try to work out what they were dealing with.

It took them a week to diagnose Ms Austrin with ciguatera poisoning.

The toxin, which is produced by tiny organisms in tropical and subtropical waters around the Pacific Islands and northern parts of eastern Australia, sticks to coral reefs, seaweed and algae and is eaten by small herbivorous fish.

Larger reef fish such as barracuda, snapper and tuna then eat these fish, which in turn are caught and eaten by humans.

There is no known antidote for the poison, which usually causes headaches, vomiting, dizziness and fatigue but in extreme cases can cause neurological problems and even death.

Ms Austrin has spent more than 30 weeks of the past 18 months since her Fijian visit in July 2011 in and out of Whakatane and Tauranga hospitals and is about to undergo further treatment at Waikato Hospital.

Before the poisoning, she rode horses competitively, competed in triathlons, game fished and was a search and rescue volunteer. Now she cannot walk far without wanting to collapse.

She has learned the toxin can be sexually transmitted. Its effect on her pancreas means she has also become insulin-dependent and has developed type one diabetes.

Her employer, Norske Skog, gave her a year's worth of paid leave but they let her go when doctors could not give a clear answer how long she could be away from work.

"They can't give a timeframe - the toxin can stay in your body for up to 20 years.

"It stores itself in your adipose tissue ... so with me there are triggers like extreme exercise, dehydration and extreme weight loss which is happening with me and that's why I'm so bad all the time."

Other triggers include any fish, nuts, alcohol, chocolate, caffeine and foods full of the mood-improving chemical serotonin.

Unable to eat or drink fluids, she has lost 20kg from her slight frame and spends several hours of every day hooked up to a total parenteral nutrition feeding system.

"My life has come to a complete halt," she said.

He said a 2010 article in the New Zealand Medical Journal warned doctors about an "increasing number of inquiries" regarding patients contracting the marine poison.

Mr Slaughter said doctors could only treat the symptoms as they arose but these were generally short-term.

"It can be sort of uncomfortable but most people do come right. It's not very often where it is that serious - for it to last months or years is kind of weird."

The ESR's Foodborne Disease in NZ 2011 report showed just two cases of ciguatera fish poisoning last year, but cases can go unreported. Other than warning people not to eat fish while on holiday, Ms Austrin thinks the Ministry of Foreign Affairs and Trade should include warnings about ciguatera poisoning on its website.

She said her case should also serve to alert doctors when travellers returned from the Pacific Islands or Australia with similar symptoms. "Every doctor I had had to Google it to find out how to do treatment because I was the first case they had come across."

She still plans to wed her fiance on their Whakatane farm next month and refuses to let her illness keep her down.