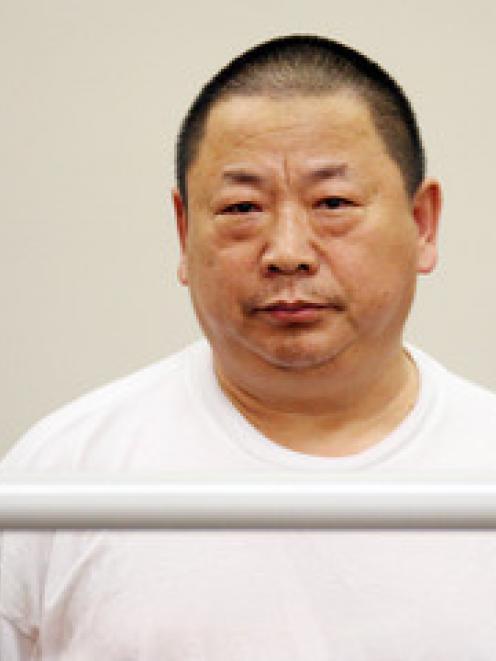 Nai Yin Xue is charged with his wife's murder,
Chinese martial arts instructor Nai Yin Xue, who abandoned his daughter in a Melbourne railway station, used a yellow tie to strangle his wife before dumping her body in the boot of his car, a court was told today.

At a depositions hearing in Auckland District Court, crown prosecutor Brian Dickey presented evidence in the case against Xue who is charged with murdering his wife An An Liu last September.

The depositions hearing has been set down for two days, before two justices of the peace.

Mrs Liu's body was found four days later in the boot of a car outside their home in the Auckland suburb of Mt Roskill.

Xue became the centre of an international manhunt after his three-year-old daughter Qian Xun Xue was found alone at a Melbourne railway station on September 15 last year.

Xue fled to Los Angeles and was on the run until February 28 when he was captured in Chamblee, a town on the northeast outskirts of Atlanta, by six Chinese Americans who recognised him from a newspaper.

Xue, who has been in custody since he returned to New Zealand, showed little emotion as he appeared in court.

The proceedings were delayed for half an hour this morning when defence lawyer Chris Comesky sought to use his own interpreter for Xue during proceedings.

A court-appointed interpreter is translating court proceedings to Xue and will translate for up to six of the crown witnesses who are expected to be called.

He dumped her body in the boot of their car where it remained undiscovered for two days while he made preparations to leave the country.

Mr Dickey said that the killing came after a series of attacks on Ms Liu by Xue, forcing her to escape to Wellington months before she died in an attempt to get away from him.

However, he followed her to Wellington and broke into the house where she was boarding.

Ms Liu eventually returned to Auckland and her husband in August, about a month before she was killed.

Strict rules have been put in place for the media covering the depositions hearing.

The two Justices of the Peace hearing the proceedings have suppressed all hearsay from Crown witnesses, which relates to conversations Ms Liu had with them.

This afternoon Ms Liu's landlord, Weihong Song, who rented a room to her and her daughter, said a man - alleged by the prosecution to be Xue - broke into his house one night while Ms Liu was boarding there.

Mr Song said he yelled at the man, grabbed a gun and chased after him.

Under cross-examination, Mr Song, whose wife and daughter were overseas when Ms Liu stayed at his home, denied being anything more than friends with Ms Liu.

Mr Song said he did not know why the media or anyone else thought something had happened between the pair.

Defence counsel Chris Comeskey suggested to Mr Song his behaviour was different to that of a landlord and asked him if it was true he told police the pair had grown quite close.

Mr Song said the pair were only ever friends and that any comments made to police may have been misinterpreted as his English was not always clear.