Budget 2019: No more school donations for decile 1 to 7 schools 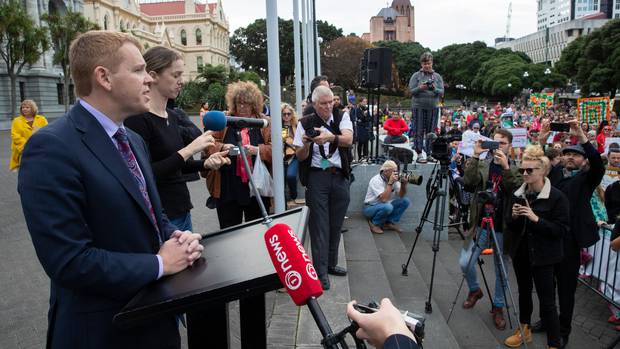 Education Minister Chris Hipkins fronting thousands of striking teachers, and their supporters, on Parliament forecourt on Wednesday. Photo: NZME
The Government wants to scrap school donations for low- and middle-decile schools in an effort to put more cash in the hands of parents.

It is also acknowledging a child obesity problem and wants schoolkids to eat healthier and have more exercise, putting $47.6 million to develop a programme for schools and early learning centres.

It is part of an extra $1.56 billion over five years for education, which includes $1.2 billion fund for a 10-year school property investment plan, revealed in today's Budget 2019 announcement.

A central part of the child wellbeing approach is an extra $265.6 million over four years to go to decile 1 to 7 state and state-integrated schools that do not ask parents for school donations.

It will require a law change and is planned to come into effect from the start of the 2020 school year.

Families of nearly half a million children at 1700 schools - 63 per cent of all students - could benefit, with the Government instead providing schools with $150 per student per year.

"We know how difficult it is for parents to afford the fees that schools charge, and the pressure it places on parents who aren't able to afford donations. Many students will now be able to get the education they need with less financial pressure on their parents."

He said schools could continue to seek donations, but they were voluntary and parents and caregivers were not required to pay them.

Hipkins also announced that $49 million will go towards removing the $76.60 NCEA fee, which will benefit 145,000 households.

Early childhood education centres will also get extra money to cover inflation costs, with $131 million over four years set aside to boost subsidies to those centres.

Sport and Recreation Minister Grant Robertson said the exercise and healthy eating programme would address the one in eight children aged 2 to 14 who are considered obese.

"As children spend a significant proportion of their day in school and eat around a third of their food each day there, schools play an important role in promoting healthy environments and supporting child wellbeing."

Robertson said a 2017/18 survey found that only 7 per cent of children aged 5 to 18 were meeting New Zealand guidelines for physical activity.

To tackle mental health issues, nurses will also be in decile 5 schools, at a cost of $19.6 million over four years. They are currently in decile 1 to 4 schools.

Hipkins also said that the $197 million of extra money from the lack of uptake for its fees-free policy would go towards plans to reform the vocational education sector.

The Government had already announced $95 million over four years to address teach shortages, though that did little to dissuade teachers from having nationwide strikes yesterday.