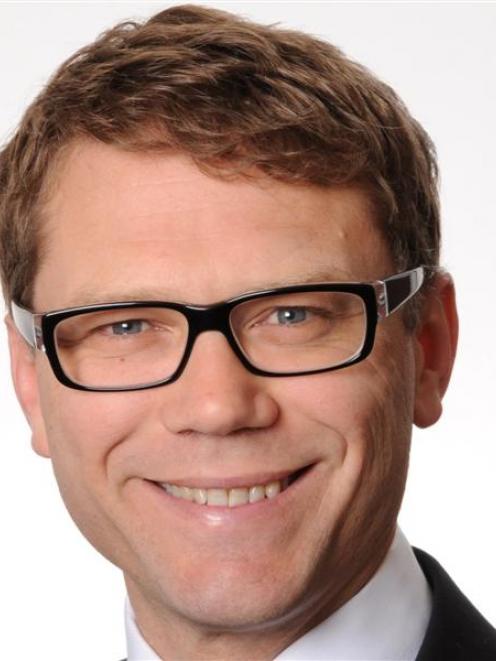 But the National Party backbencher was briefly, but embarrassingly, lost for that commodity this week.

The list MP had been keeping a low profile after opting not to take part in an all-party studio debate on TV3's The Nation last weekend for candidates standing in Epsom.

Seeking an explanation for the no-show, one of the channel's news hounds finally tracked Goldsmith down on Thursday. The ambushed MP was caught completely off-guard. He was gasping like a fish out of water. When he did find his voice, he made an absolute hash of answering the reporter's questions.

It is little wonder the normally highly articulate and unflappable MP was so hopelessly tongue-tied.

For the second election in a row as National's Epsom candidate, Goldsmith is partaking in a ridiculous charade that seemingly requires him to pretend he is a normal candidate, presumably so the local branches of the National Party can pretend they are fighting to win the seat. Yet everyone knows he is under strict instructions from head office to lose.

While it is not yet official, National once again intends gifting Epsom to Act New Zealand, in the supremely optimistic hope that party can resurrect itself and pick up enough support to bring one or two more centre-right MPs into Parliament under the ''coat-tailing'' anomaly.

Goldsmith, however, has been sending mixed messages. One moment he is standing in the electorate to ensure National hangs on to its hefty party vote, the next he is promising National will do the ''best job we possibly can'' in Epsom, thereby intimating National intends winning back the seat.

That is not going to happen. However, a new phrase has been added to the political lexicon - ''doing a Goldsmith''. It would be far simpler and much more honest for National not to stand in Epsom at all, but National harvested more than 24,000 party votes in the electorate in 2011 and it does not want these voters left feeling they are being taken for granted.

However, the days are now long over when it comes to an oblique nod-and-a-wink or symbolic cups of tea as supposedly subtle methods of informing voters how to cast their electorate vote to best tactical effect, but without being castigated for manipulating the electoral system.

What was artifice is now just farce. Much to Goldsmith's relief, no doubt, it sounds like the Prime Minister will be far more explicit when he finally declares with whom and where National is willing to entertain mutually beneficial electoral accommodations at the coming election.

Apart from throwing Act yet another lifeline, it is also in National's interests to ensure Peter Dunne maintains his 30-year hold on the Ohariu seat in Wellington. United Future - Dunne's party - is highly unlikely to register a party vote high enough to get it a second MP. In a hung Parliament, however, Dunne's lone vote could be the difference between National clinging to power and absolute deadlock, which could force another election, unless an opposition party was willing to abstain on confidence votes and Budget-related measures.

One reason National is willing to help Act and United Future is that neither party poses any threat to National.

Things are more problematic when it comes to the third leg of the electoral accommodation trifecta - Colin Craig's Conservative Party.

All election year, John Key has ensured there are several lengths of bargepole between Craig and National.

Back in January when he flagged the various post-election coalition options available to National, Key referred to ''policy differences'' with the Conservatives, but said it was likely there would be enough common ground for the two parties to work together in government.

Indeed, that is the case on policy fundamentals such as health and education. National could drive a bus through the holes in much of the Conservatives' policies. There is certainly room for compromise. Craig has also said he will not try to re-litigate issues where Parliament has spoken strongly in favour of a measure, such as gay marriage.

Furthermore, Craig's party will be doing extremely well to get 4% to 5% of the vote. Its leverage when it comes to pressuring National will be minimal.

That is all fine and dandy. What worries Key is Craig's and the Conservatives' public image as a bunch of crazed, intolerant fruit-loops.

Consequently, when Key issued his ''who can work with who'' treatise back in January, he made it clear he would not be talking about possible electoral accommodations until much closer to the election.

Key was obviously hoping he would not have to rely on Craig. He certainly did not want to have to agree to another electoral accommodation and thus hand over another of National's safe seats.

However, the distinct possibility the Maori Party will lose all its seats really leaves him no choice.

Worse, from the moment Key agrees to such an arrangement, Craig, along with his party, will be transformed from interested observers on the margins to significant players at the very heart of domestic politics - especially if they hold the balance of power.

The media will assess every utterance Craig makes and judge how it squares with National's thinking.

On top of that, there is Craig's capacity to say something truly outrageous, weird, wacky or just plain silly. Wary of collateral damage to National, Key does not want to spend the election campaign apologising for the ravings of a would-be coalition partner.

Before any accommodation is reached pre-campaign, Key will weigh up the hit National might take simply by being associated with the Conservatives. Indicative polling suggests Craig's reactionary (to use that word in its proper non-pejorative meaning) bent appeals most to middle-aged males in the provinces. And the latter are most definitely on Craig's radar, along with the elderly.

Key will be worried that being seen as close to Craig will cost National the votes of urban liberals, especially women. His problem is that he does not have the luxury of being able to write off a chunk of the centre-right vote. He has to accommodate Craig.

Craig, however, poses more of a threat to Winston Peters with regard to which segments of the vote he is targeting, and that could help National.

Key might yet strike lucky. Giving Craig a seat that brings in a handful of MPs could result in Key needing either New Zealand First or the Conservatives to govern. That would force Peters to negotiate with Key. Otherwise, Key could turn to Craig.

However, it would be a short step from that relative comfort to needing both Peters and Craig to govern. And would not that be the stuff of nightmares for any prime minister.