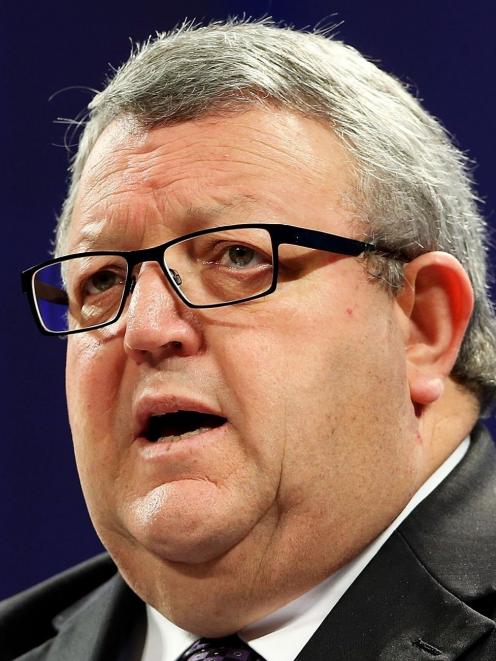 Gerry Brownlee
Former transport minister Gerry Brownlee bought chewing gum and a can of softdrink in a bookshop after barging through airport security, new information about the 2014 incident at Christchurch Airport shows.

One of his aides also bought food items while the group waited for boarding passes.

The Civil Aviation Authority has released the information after being told to by Ombudsman Leo Donnelly in response to a complaint about parts of the report being withheld.

The report says there was plenty of time for Mr Brownlee and his aides to board their flight to Wellington on the morning of July 24, 2014, if they had followed usual security protocols.

Mr Brownlee was fined $2000 for the infringement and his aides were issued formal warnings, reflecting what the CAA saw as their limited culpability.

At the time, Mr Brownlee offered his resignation to Prime Minister John Key but it was rejected. He apologised publicly several times for putting an airport security staff member in a difficult position.

Ms Cooze described the unnamed staff member responsible for monitoring the Koru exit door into the secure area as being almost ``dumbfounded'' when Mr Brownlee walked past and made a passing comment about being late for his flight, and then proceeded through into a gate lounge.

Mr Brownlee's presence and conduct, as a senior member of Parliament, would have had the effect of potentially exerting a degree of undue influence, whether intended or not, on this employee, the report said.

The minister's conduct unfairly placed the employee in an untenable position, and the evidence supported the employee's account that consent to enter was ``not freely given''.

``Nor was it reasonable to imply it was given in the circumstances, due to his lack of initial response.''

Ms Cooze said Mr Brownlee and his aides were adamant they had spoken to the security staff member and when they asked if they could enter, he replied ``Yes, sure'' or words to that effect.

Ms Cooze said this was not supported by the evidence.

``The fact the subjects have raised this in support of their actions is unfortunate, and does not necessarily demonstrate acknowledgement of the seriousness of their actions, or having taken on board any learnings from the event.''

After hearing knocking on the door, the security staff member, who had recognised Mr Brownlee, decided to swipe his security card to release the door. His intention was then to explain to Mr Brownlee's party they could not enter and would have to proceed to the security screening area, Ms Cooze said.

The security officer's recollection was Mr Brownlee said something along the lines of: ``Sorry to do this to you but we are in a hell of a hurry'' before walking off to the departure area, where they headed to the bookshop.

Ms Cooze found Mr Brownlee and his aides did not have boarding passes at the time they entered through the Koru lounge exit and did not pass through the approved thoroughfare to enable security screening.

All admitted knowing the area was secure and that they were required to pass through approved screening before entering.

Ms Cooze said the appropriate option would have been to continue to the security screening area and pass through the security point, as all passengers were required to do.

This meant there was plenty of time for the party to enter the departure lounge and board their aircraft.

Mr Brownlee had taken full responsibility for making the ``fateful decision'' to turn left and take the shortcut, resulting in the group unlawfully entering the secure area.

The infringement notice with a $2000 fine would appropriately address Mr Brownlee's culpability.

His decision placed his aides in a position where they felt compelled to follow his instruction as employees, although both were aware of security rules, and a formal warning letter would adequately address their culpability, she said.

In his opinion, Mr Donnelly upheld the CAA's right to withhold the explanations from Mr Brownlee and the aides. All had consented to a formal interview under caution and, in these circumstances, it was clear the CAA would hold their statements confidentially, subject only to the possibility they would be disclosed should they be prosecuted in an open court.

He considered disclosure of this information would create ``a real risk that future parties, whether suspects or witnesses, would be inhibited from informing the CAA about possible breaches of the Civil Aviation Act out of fear that their statements would not remain confidential''.

Signs have been placed on the Koru exit door and a one-way turnstile installed to act as an additional deterrent.

I think if this had been LAX, they'd have been tasered or shot.