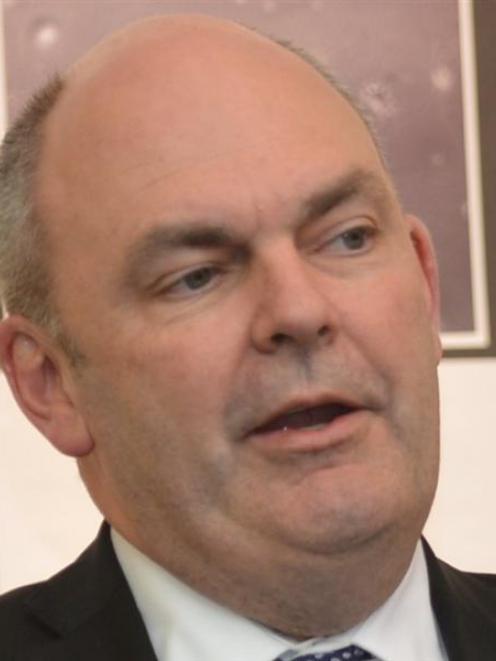 Steven Joyce
What next, minister? New Zealand's Got Talent?

You might well think Steven Joyce and stand-up comedy would be mutually exclusive items. But you would be wrong.

The man who fills the No4 slot in National's hierarchy has many roles - Cabinet minister; National's election campaign director; the party's go-to man when there is a major problem to be fixed ; and, the senior National MP designated with the task of picking holes in Labour and Green policies while they are still hot off the press.

To that list, now add court jester. Mr Joyce took the first call in Wednesday afternoon's general debate - long a platform for Parliament's better orators - to parody Labour's under-the-weather David Cunliffe in a fashion which was as clever as it was cruel as it was funny.

Within the space of a five-minute speech, Mr Joyce had revealed another weapon in his armoury - the ability to cut an opponent down by sheer wit - and thereby further enhanced his credentials as the frontrunner for National's leadership when Mr Key finally moves on.

There was, however, another interesting outcome from his contribution - its impact on those sitting opposite him.

Mr Cunliffe was not in the chamber. But those Labour MPs who were initially tried to ignore what was a virtuoso performance. But their barely-suppressed smiles gave the game away.

If any group of people could do with a enjoying a bit of a laugh it is Mr Cunliffe's colleagues.

They have watched in increasing despair and horror as their leader of just 10 months has virtually self-destructed and taken the party's support down with him from the mid-30s to the mid-20s in percentage terms.

Mr Cunliffe is now very much marooned in a malaise from which it is almost impossible for a Leader of the Opposition to drag himself or herself.

You can do nothing right. Every opinion poll just brings even more bad news. No-one takes you seriously. You become the target of every cheap joke and jibe. The media spit on what remains of your dignity. The public write you off.

In short, you are deemed to be terminal. You then wait for the firing squad - the knock on the door from a delegation of your MPs who have determined your use-by date has long passed and your ability to resuscitate your party's flagging support is seen as likely as a squadron of pigs gliding past the Beehive.

Fortunately for Mr Cunliffe, Labour is also now closer to election day than it was in 1990 when Mike Moore deposed Sir Geoffrey Palmer in a questionable coup which had the sole purpose of saving the party from being completely routed by National.

Mr Cunliffe might take some small consolation from the fact that the one Labour leader who somehow managed a Houdini-like escape from the similar vortex currently battering him was his mentor, Helen Clark.

She did so by staring down her parliamentary colleagues - something Mr Cunliffe can likewise do by virtue of his power base in the wider party and trade union affiliates.

Miss Clark's reviving of her leadership could be put down to her success in the televised leaders' debates during the 1996 election which highlighted to a wider population her until-then-unseen strengths.

Miss Clark was also up against an unpopular Jim Bolger. In the 2014 version, Mr Cunliffe will be up against the most formidable and popular National Party leader since Sir Robert Muldoon was at the height of his powers in the 1970s.

Like Ms Clark, Mr Cunliffe will have to cope with the ''worm'' tracking his responses in the debates. Even a hint of arrogance, superiority or being too clever by half will see the worm in punishing mood.

Mr Cunliffe will have one advantage going into the debates. He will be the underdog. He is also a far sharper and more powerful a debater than was the one-dimensional Phil Goff in 2011.

But then neither Labour leader has ever really got the better of Mr Key when going head-to-head in that other verbal boxing ring - ministerial question-time in Parliament.

Mr Cunliffe's cause has not been helped by Labour whingeing over TVNZ choosing Mike Hosking - someone Labour sees as biased in National's favour - to be the moderator for the channel's debates.

Hosking is a thorough professional. He hardly needs reminding that his performance will be scrutinised intently. Any bias will be blatantly obvious. Which is why there will not be any bias.

It is asking an awful lot of the leaders' debates to provide the kind of miracle Mr Cunliffe needs to pull himself, his leadership and his party out of the Slough of Despond. And it has to happen well before then. Labour's strategists see part of the answer in trying to lift Mr Cunliffe above the normal fray and have him focus on Labour's core bread-and-butter issues and accompanying policy - and leave the daily flare-ups and relative trivia for colleagues to handle.

Both Labour and the Greens are acutely aware that it would suit National just fine for the four-week formal election campaign to be filled with constant distractions and sideshows. It takes something like the ''Corngate'' affair which was sprung on Labour from the outside and resulted in genetic engineering dominating the 2002 campaign.

Leaked material relating to security matters and said to detail New Zealand's real view of its South Pacific neighbours is the pick for this election campaign. And, of course, there is Kim Dotcom's promise to reveal all about what Mr Key knew of him before the date that Mr Key says he knew of the internet tycoon.

None of that is terribly helpful to Mr Cunliffe. As the leader of one of the two major parties, he is guaranteed profile throughout the campaign, But he must make something of it. As things stand now, Labour's poll rating is dangerously close to making the centre-left irrelevant to the result of the election.

Mr Cunliffe somehow has to make himself relevant - even if the centre-left still ends up falling short of being able to govern. Being irrelevant would be the final ignominy. And likely pull the final curtain down on his tenure.