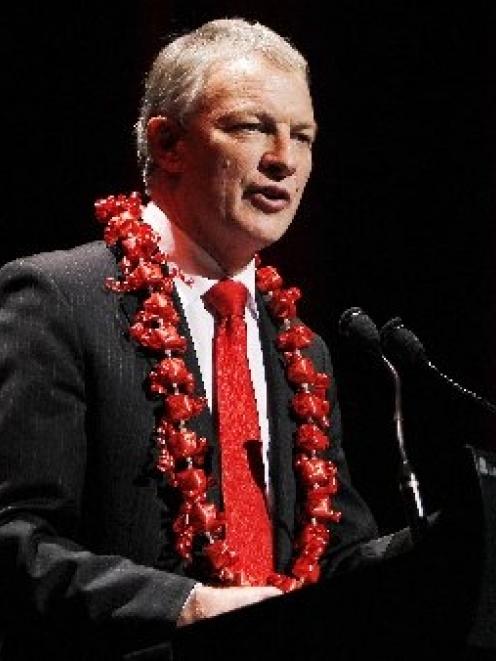 Phil Goff at the Labour Party conference in Auckland yesterday. Photo by NZPA.
Labour has made a dramatic reversal on its foreign investment policy: big land sales to overseas buyers would be turned down except in exceptional circumstances.

Party leader Phil Goff said yesterday a Labour government would welcome foreign investment, but if his party won the next election there would be strict controls.

"Labour will reverse the current approach to overseas sales of land," he said at the party's annual conference in Auckland.

They will be declined unless the overseas purchaser of farm or forestry land also invested in significant further processing of primary products and transfers new technology into New Zealand.

"They're not going to just cut down trees and ship them offshore," he said.

The rules, affecting tracts of land of more than 5ha, would also apply to Australian buyers of farm and forestry land - a move which could have serious implications for the CER agreement and the reciprocal rights of New Zealanders to buy in Australia.

Most applications have been approved by both the last Labour government and the present National one.

He said he had spent many years as foreign minister and trade minister representing New Zealand "and no country I can think of would find the rules I am proposing unusual".

Labour would also prevent overseas purchases of more than 25% of monopoly infrastructure, where their interest was worth $10 million or more.

"If you want to buy into New Zealand, then you will have to bring something to offer New Zealand. If you do, we will welcome you," Mr Goff said.

Mr Goff indicated that Labour would maintain its policy of no state-asset sales.

Labour would also introduce a general ministerial discretion covering all assets worth more than $100 million that are not covered by the new farmland or monopoly infrastructure rules.

"Access to foreign capital is important for New Zealand and Labour will encourage other forms of direct foreign investment," Mr Goff said.