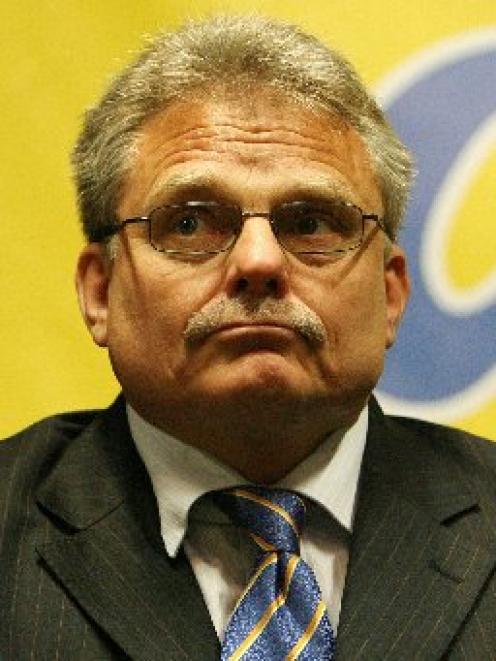 David Garrett. Photo by NZPA.
Scorn has been poured on ACT MP David Garrett's suggestion that bad parents should be offered a $5000 incentive to get sterilised.

The list MP expressed the personal view on a blogsite after reports yesterday into family violence deaths and into measures to tackle abusive parents.

"If - say - $5000 was paid to the likes of both parents of the Kahui twins if they chose to be sterilised, this would address many ... concerns," Mr Garrett commented on the Kiwiblog debate about sterilisation.

"Nothing compulsory, just an option. To take Kahui-King as examples, how much is it costing the state now to care for the children Maxyna (Macsyna) King has had removed from her?

"How much will it cost to care for the 6 or 8 more she may have before menopause? How much is it costing for CYF to monitor the well being of Chris Kahui's latest offspring?

"$5000 to each of them is ludicrously cheap by comparison."

Three-month-old south Auckland twins Chris and Cru Kahui were killed in June 2006, and their father Chris Kahui was acquitted of their murders in 2008.

Mr Garrett said some might think his suggestion was silly, but India had a sterilisation programme in the past.

In the 1950s, India encouraged sterilisation as a form of population control and during India's state of emergency in 1976 there was forced sterilisation in poor neighbourhoods.

Tau Huirama, from anti-violence group Jigsaw, said he was shocked by the MP's comments.

"I just cringe at the thought of sterilisation, it's a thing that takes you back to Hitler and that sort of thinking."

He said parents needed to be helped if they were struggling and sterilisation was a permanent measure when people could change.

"This idea is you wait until a child's been abused and then you give the parents $5000 to be sterilised so they don't have any more."

She said the money would be better invested in parenting programmes.

Former Children's Commissioner Dr Ian Hassell said the idea was absurd as people who seriously abuse children were unlikely to take up the option of being sterilised.

ACT leader Rodney Hide said the MP was entitled to his views but they did not represent the wider party on this issue.

It is not the first time Mr Garrett has been in the headlines for his outspoken views and behaviour.

Last year Mr Garrett apologised for making lewd comments to a female ACT staff worker, saying he was not used to Parliamentary standards.

"I'm on a very steep learning curve. I now understand very clearly that the kind of thing that might have been okay in a law firm in Tonga is not okay in Parliament."

He then had to apologise again for saying his behaviour would have been acceptable in a Tongan law firm.

Mr Garrett also disturbed his fellow MPs on Parliament's law and order committee when he told prison officers who had criticised private prisons that they had damaged their job prospects.

On another occasion, he attacked Dame Sian Elias, saying that she did not seem to care that William Bell was out of jail on parole when he murdered three people and also said criminals had lost their right to have their safety considered in double-bunked cells.

"Rape is a crime wherever it occurs, and can be dealt with in the same way as any other offence committed in prison," he said.

"The fact is if you don't want to be assaulted - or worse - by a cellmate, avoid prison by not committing a crime."

Mr Garrett was a member of the Sensible Sentencing Trust and entered Parliament fifth on the party list after Mr Hide won Epsom.

He stood against John Key in the Helensville and received 811 votes compared to Mr Key's 26,771.