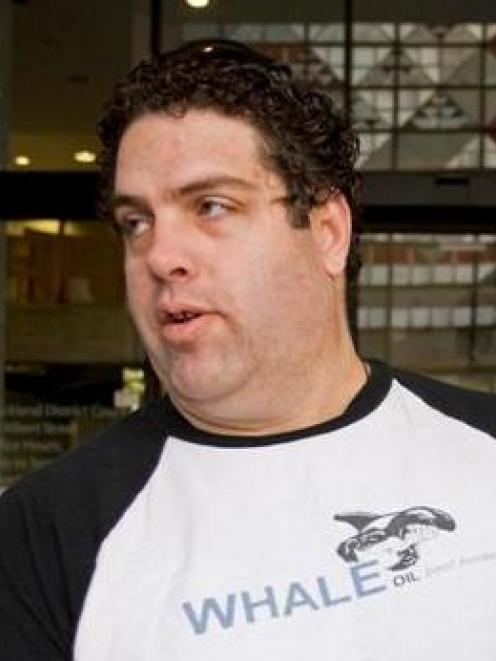 Cameron Slater
Whaleoil blogger Cameron Slater is being prosecuted for exactly the same thing he is complaining about -- using someone else's private communications without their permission.

And the prosecution could see the blogger ordered to produce in court original copies of information used in Nicky Hager's Dirty Politics.

Slater filed a complaint with the Privacy Commission after Hager used years of hacked email and social media conversations to write the book, which paints a picture of a National government which encourages attack politics through blogs.

But the commission has recently decided Slater had breached the privacy of businessman Matt Blomfield after the blogger published dozens of posts on Whaleoil based on a computer hard drive he had obtained. It passed the case to the office of the Director of Human Rights Proceedings, which is now prosecuting him over five days in October.

Barrister Simon Judd, who is prosecuting the case for the Director of Human Rights Proceedings, said Slater was defending the case by claiming he was a journalist and not subject to the Privacy Act.

He said it would be argued Slater was not a journalist -- and even if he was, the material he published on Mr Blomfield was not a "news media activity".

"If he's putting stuff on the internet about Mr Blomfield where this is no public interest and the stuff he is putting on is private information, we would argue that can't possibly be a news activity."

He said he believed some material highlighted in Dirty Politics could be sought from Slater through discovery rules because it had relevance to the prosecution. Dirty Politics claimed there was an arrangement which saw public relations specialist Carrick Graham feeding posts to Slater's blog attacking those who challenged his clients. The posts included attacks on those campaigning against alcohol, breast-feeding, obesity and smoking.

He said it could make the case that Slater's involvement in "public relations work for corporates" was not an activity which was consistent with claims he was a journalist.

Mr Judd said if the prosecution was successful then remedies could includes a financial damages award and an order for Slater to attend a training session on privacy rights.Mr Blomfield claimed Slater obtained a computer hard drive with 10 years of data on it, including emails, family photographs and legal documents.

The material was used to write content for the blog which had a "huge" impact, said Mr Blomfield.

"It is not just the feeling of having no privacy whatsoever. It's the privacy of everyone around you that is taken away as well. It's a very good way to destroy any relationship you have with anyone in terms of trust."

He said the Dirty Politics case was different as it Hager had removed personal details from the hacked content and it was about public figures.

"I'm running my household. They're running the country."

Mr Blomfield is also suing Slater for defamation with a full hearing expected next year. A High Court decision is pending in the case on whether Slater is a journalist -- a status he is seeking in the belief it will allow him to withhold information about his sources from Mr Blomfield.