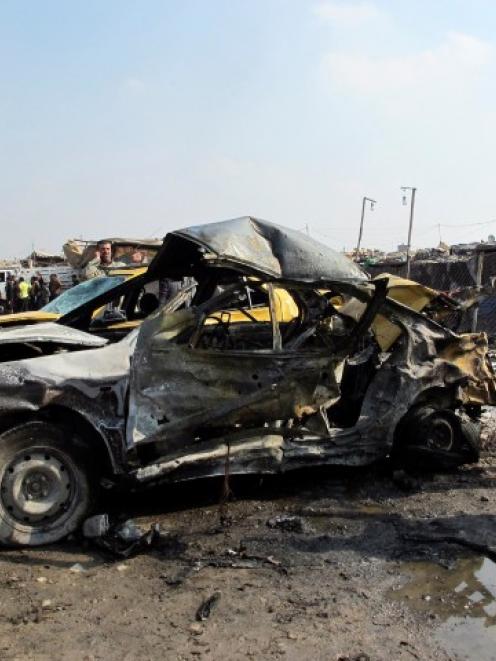 Residents gather at the site of a car bomb attack in Baghdad's Kadhimiya district. REUTERS/Thaier Al-Sudani
Five car bombs killed at least 34 people in Shi'ite areas of Iraq, police and medics said, as sectarian and ethnic tensions intensify ahead of provincial elections in April.

Two car bombs were detonated simultaneously at a bus stop near a Friday street market selling birds and other pets in the Shi'ite district of Kadhimiya in Baghdad, killing at least 16 people and wounding another 44, police and hospital sources said.

Footage of the scene showed dozens of buses and taxis destroyed by the explosion and blood on the ground.

Ongoing violence following the withdrawal of U.S. troops in late 2011 is stoking fears of a return to the sectarian strife that killed tens of thousands of Iraqis in 2006 and 2007.

Prime Minister Nouri al-Maliki, a Shi'ite, is facing mass protests by disenchanted Sunni Muslims and is at loggerheads with ethnic Kurds who run their northern region autonomously from Baghdad.

The prospect of the election is hardening the divisions as political leaders appeal to their constituencies with often hostile rhetoric that rejects compromise.

In the Shi'ite city of Hilla, 100 km (60 miles) south of Baghdad, 15 people were killed in two car bomb explosions at a vegetable market.

"I was shopping when I heard the first explosion. I was scared and tried to reach my car to run away but before I got in the second explosion went off," said Habib al-Murshidi who was at the scene.

"I saw many people, women and old men lying on the ground which was covered with blood and scattered fruit and vegetables".

Another three people were killed by a parked car bomb in Kerbala, 80 km (50 miles) southwest of Baghdad, police said.

Thousands of Sunni Muslims have taken to the streets since late December in protest at what they see as the marginalisation of their sect since the fall of Saddam Hussein and the empowerment of Iraq's Shi'ite majority through the ballot box.

The demonstrations in the Sunni heartland of Anbar are also compounding fears that war in neighbouring Syria, where Sunni rebels are fighting to topple a leader backed by Shi'ite Iran, could further upset Iraq's own delicate sectarian and ethnic balance.

No group claimed responsibility for the attacks on Friday.

Iraq is home to several Sunni insurgent groups that have carried out at least one high-casualty attack a month since the U.S. withdrawal. They include a local branch of al Qaeda, the Islamic State of Iraq, which often targets Shi'ites, seeking to reignite sectarian strife.

On Monday, a suicide bomber attacked a government-backed militia in Taji, killing at least 22 people -- the seventh of eight suicide bombings in Iraq over the past month alone.