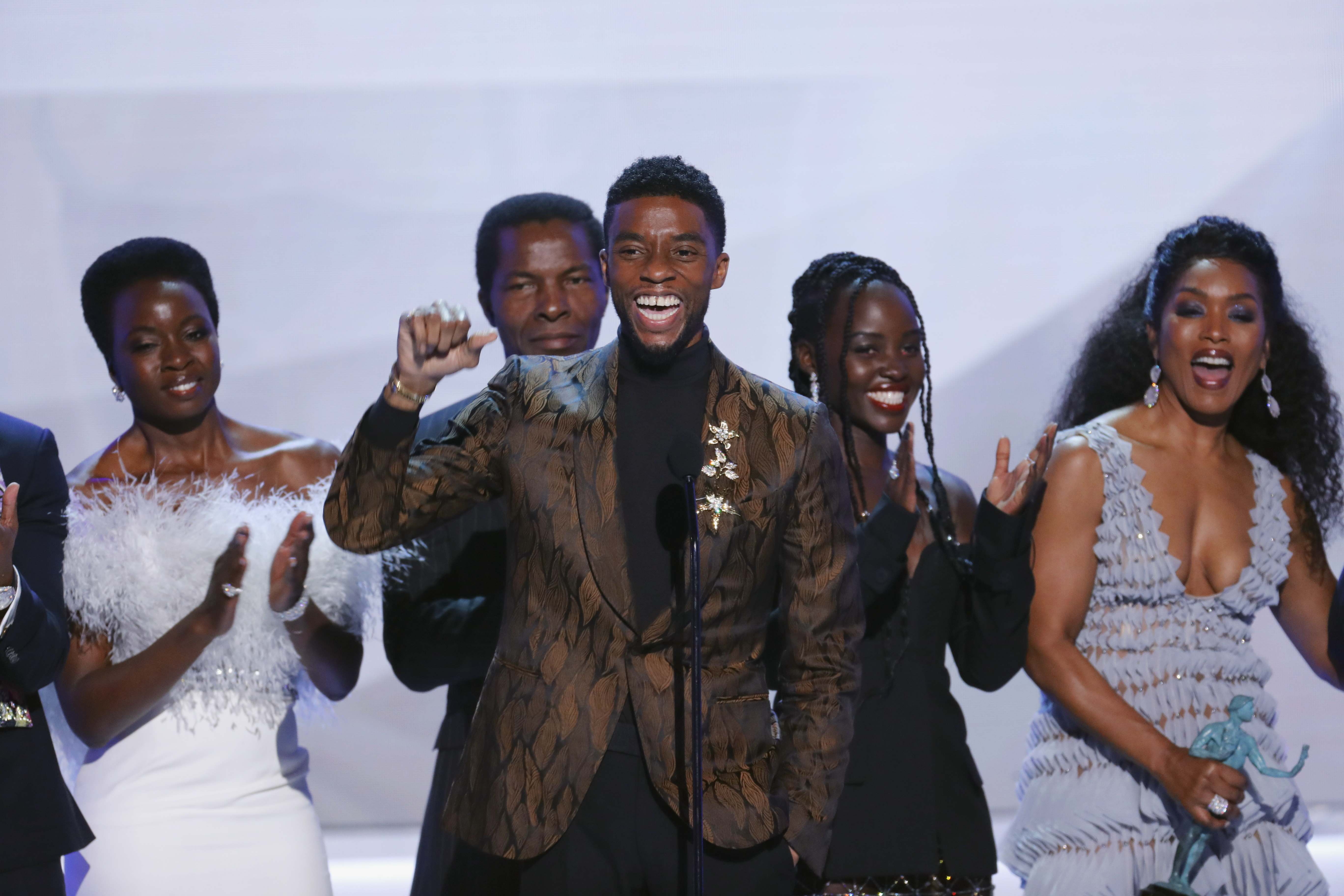 Black Panther from Walt Disney Co's Marvel Studios was named best movie ensemble on Sunday in a surprise triumph over favourite A Star is Born, the Bradley Cooper and Lady Gaga musical remake, which ended the night without any SAG trophies.

Close and Malek won Golden Globes earlier this month for these roles.

The awards from SAG-AFTRA, Hollywood's largest actors' union, are closely watched because actors form the largest voting group in the Academy of Motion Picture Arts and Sciences, which hands out the Oscars. 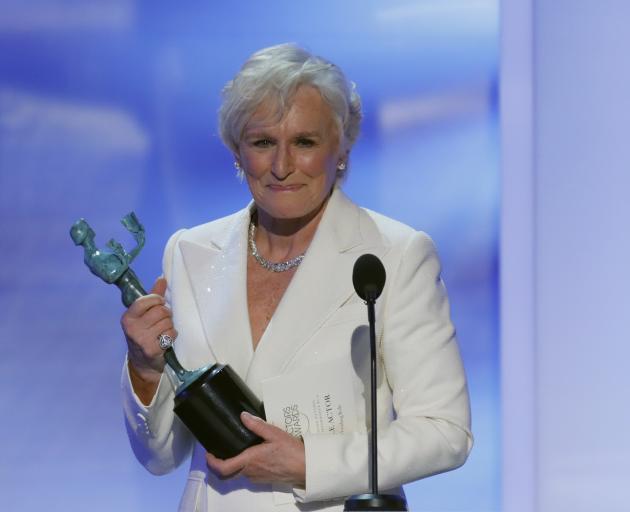 Glenn Close added a SAG award to the Golden Globe won earlier this month for her performance in The Wife. Photo: Reuters
Black Panther has been embraced by audiences, becoming the second highest grossing movie at worldwide box offices in 2018, and applauded as a milestone for diversity in Hollywood.

"I didn't think I was going to have to speak," shocked star Chadwick Boseman said on stage in Los Angeles, surrounded by other actors from the film.

Boseman said his co-stars "all know what it's like to be told that there is not a place for you to be featured, yet you are young, gifted and black," referring to the 1969 Nina Simone anthem of racial pride.

But he added that they realised early on that "We had something special that we wanted to give the world."

Malek, who defeated Cooper and Vice star Christian Bale, praised the character he played. "I get some power from him that is about stepping up and living your best life and being exactly who you want to be," Malek said of Mercury.

Close said she wore her grandmother's wedding ring to the SAG awards after recently learning she had wanted to be an actor. But the option was unavailable to her, Close added. 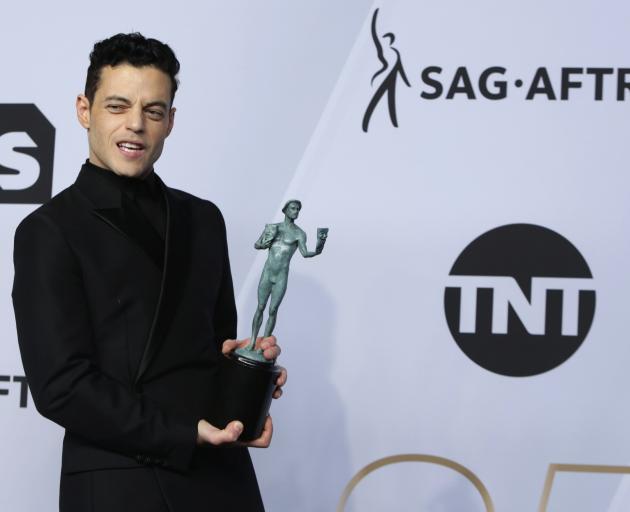 Rami Malek poses backstage with his SAG award. Photo: Reuters
The victory for Black Panther is a sign that it will enjoy broad support in this year's Oscars best pictures race, which has confounded experts with a strong field of contenders and no clear frontrunner.

Only one film in the last 23 years has won the prestigious best picture Oscar without being nominated for SAG's ensemble prize. That was last year's fantasy romance, The Shape of Water.

That scenario could repeat itself this year as SAG snubbed some of the best picture candidates in the ensemble category, including Spanish-language drama Roma, British period comedy The Favourite and Golden Globe best comedy winner Green Book.

The Oscars will be awarded on February 24.

This is Us, on Comcast Corp's NBC, won best ensemble cast for a television drama. 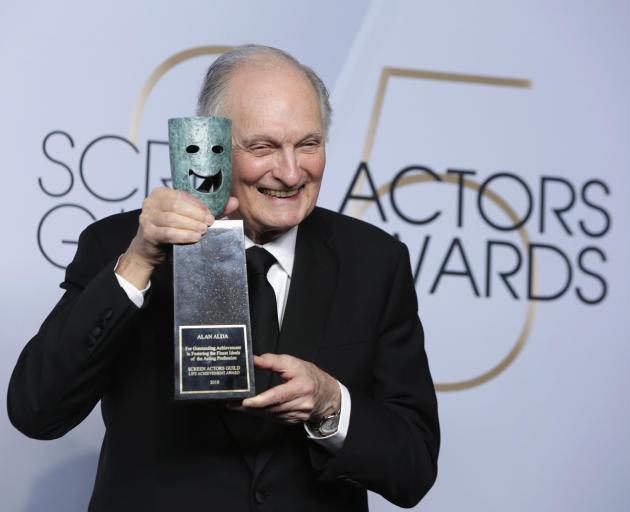 Alan Alda, best known for playing a wise-cracking Army doctor on the long-running anti-war comedy received a lifetime achievement award from his fellow actors on Sunday, celebrating a 60-year career on stage and screen.

The 82-year-old who announced in July last year that he had been diagnosed with Parkinson's disease three years earlier, was presented the honour by film star Tom Hanks.

"I see more than ever how proud I am to be part of our brotherhood and sisterhood of actors," Alda said, after receiving a sustained standing ovation from his peers.

Declaring it was every actor's job to "get inside a character's head and to search for a way to see life from that person's point of view."

"It may never have been more urgent to see the world through another person's eyes than when a culture is divided so sharply," he added.

The New York-born performer got his start in live theatre, made dozens of motion pictures and worked extensively elsewhere on TV, including two seasons on NBC's celebrated political drama The West Wing, playing a Republican US senator.

The West Wing earned Alda his sixth Emmy Award, on top of five previous Emmys for his work on M*A*S*H. He is the only performer to win Emmys for acting, directing and writing on the same series. He also was a three-time Tony Award nominee for his Broadway work, most recently in 2005 for Glengarry Glen Ross.

On the big screen, Alda earned an Oscar nomination for his supporting role as a real-life US senator, Republican Owen Brewster, in Martin Scorsese's 2004 historical biopic The Aviator about mogul Howard Hughes.

Alda, however, will remain forever associated with M*A*S*H, based on the 1970 Korean War movie satire directed by Robert Altman and adapted from a novel of the same name by a real-life doctor who served in Korea.

The show centred on the antics of Hawkeye Pierce and fellow doctors and nurses of the 4077th Mobile Army Surgical Hospital as they struggled to keep their sanity and save lives. It went beyond poking fun at Army life to deal with such issues as circumstantial ethics and the morality of war.

A show that ran 11 seasons on CBS and years more in syndicated reruns. Its 1983 series finale was watched by nearly 106 million viewers, a record that stood three decades as the largest audience for a US TV broadcast.