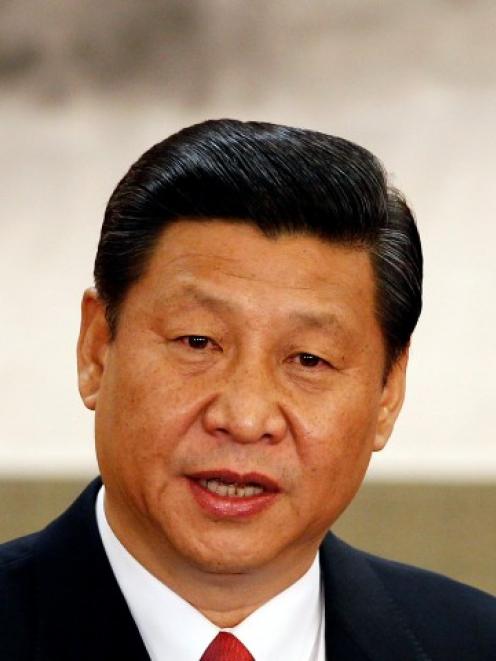 Newly elected General Secretary of the Central Committee of the Communist Party of China Xi Jinping speaks as he meets the press at the Great Hall of the People in Beijing. REUTERS/Carlos Barria
China's ruling Communist Party has unveiled an older, conservative leadership line-up that appears unlikely to take the drastic action needed to tackle pressing issues like social unrest, environmental degradation and corruption.

New party chief Xi Jinping, premier-in-waiting Li Keqiang and vice-premier in charge of economic affairs Wang Qishan, all named as expected to the elite decision-making Politburo Standing Committee, are considered cautious reformers. The other four members have the reputation of being conservative.

The line-up belied any hopes that Xi would usher in a leadership that would take bold steps to deal with slowing growth in the world's second-biggest economy, or begin to ease the Communist Party's iron grip on the most populous nation.

"We're not going to see any political reform because too many people in the system see it as a slippery slope to extinction," said David Shambaugh, director of the China Policy Program at George Washington University's Elliott School of International Affairs.

"They see it entirely through the prism of the Soviet Union, the Arab Spring and the Colour Revolutions in Central Asia, so they're not going to go there."

Vice-Premier Wang, the most reform-minded in the line-up, has been given the role of fighting widespread graft, identified by both Xi and outgoing President Hu Jintao as the biggest danger faced by the party and the state.

The run-up to the handover has been overshadowed by the party's biggest scandal in decades, with former high-flyer Bo Xilai sacked as party boss of southwestern Chongqing city after his wife was accused of murdering a British businessman.

Bo, who has not been seen in public since early this year, faces possible charges of corruption and abuse of power.

One source said an informal poll was held by over 200 voting members in the party's central committee to choose the seven members of the standing committee from among 10 candidates. Two of them who had strong reform credentials - Guangdong party boss Wang Yang and party organisation head Li Yuanchao - failed to make it, along with the lone woman candidate Liu Yandong.

The source, who has ties to the leadership, told Reuters on condition of anonymity that Wang and Li Yuanchao, both allies of Hu, did not make it to the standing committee because party elders felt they were too liberal.

However, all three are in the 25-member Politburo, a group that ranks below the standing committee. It was earlier believed the voting was confined to the Politburo.

In the end, the seven-member leadership has an average age of 63.4 years compared with 62.1 five years ago. Xi led the others out in a parade at the Great Hall of the People, with all seven dressed in identical dark blue suits, all but one set off by red or maroon ties.

The final line-up of the team and even the number was speculated on for weeks. The committee was cut to seven members from nine, which should ease consensus building and decision making.

Except for Xi and his deputy Li Keqiang, all the others in the standing committee - the innermost circle of power in China's authoritarian government - are 64 or above and will have to retire within five years, when the next party congress is held.

That means the party may just tread water on the most vital reforms until then, although after that, Xi would probably have more independence in choosing his team. The current line-up has been finalised by Xi and Hu, and by former president Jiang Zemin, who has wielded considerable influence in the party after the tumult over the Bo Xilai scandal.

Wang and Li Yuanchao could make it to the standing committee at the next party congress in 2017, perhaps along with so-called "sixth generation" leaders like Inner Mongolia party chief Hu Chunhua.

"The leadership is divided," said Jean-Pierre Cabestan, a Chinese politics expert at Hong Kong Baptist University, adding however that the new leadership would find it easier to make progress on economic reform rather than political change.

"It's easier for them to move to a new growth model. I think they agree upon that and that won't be the hardest task. But I see a lot of political paralysis."

Tony Saich, a China politics expert at Harvard's Kennedy School of Government, said: "To me it smacks of a holding pattern. I think the understanding is that Wang Yang has a good shot in five years' time."

Besides party chief, Xi was also appointed head of the party's top military body, which gives him two of the three most important posts in the country. He will take over from Hu as president in March.

Jiang, who was Hu's predecessor, did not give up the military post until two years after giving up the party leadership.

Xi said in an address that he understood the people's desire for a better life but warned of severe challenges going forward.

"We are not complacent, and we will never rest on our laurels," he said after introducing the standing committee at the Great Hall of the People in a carefully choreographed ceremony carried live on state television.

"Under the new conditions, our party faces many severe challenges, and there are also many pressing problems within the party that need to be resolved, particularly corruption, being divorced from the people, going through formalities and bureaucracy caused by some party officials."

North Korean-trained economist Zhang Dejiang is expected to head the largely rubber-stamp parliament, while Shanghai party boss Yu Zhengsheng is likely to head parliament's advisory body, according to the order in which their names were announced.

Tianjin party chief Zhang Gaoli and Liu Yunshan, a conservative who has kept domestic media on a tight leash, make up the rest of the group. Zhang should become executive vice premier.

"Words from the new leadership will be reform-minded, but deeds would be very cautious at least in economic and financial restructuring," said Alberto Forchielli, managing partner at Mandarin Capital Partners in Shanghai.

Advocates of reform are pressing Xi to cut back the privileges of state-owned firms, make it easier for rural migrants to settle in cities, fix a fiscal system that encourages local governments to live off land expropriations and, above all, tether the powers of a state that they say risks suffocating growth and fanning discontent.

With growing public anger and unrest over everything from corruption to environmental degradation, there may also be cautious efforts to answer calls for more political reform, though nobody seriously expects a move towards full democracy.

The party could introduce experimental measures to broaden inner-party democracy - in other words, encouraging greater debate within the party - but stability remains a top concern and one-party rule will be safeguarded.

In contrast to the mounting excitement until the announcement of the standing committee at the Great Hall of the People, the unveiling barely caused a ripple in China's vast countryside.

"We're not really that interested," said Chen Yongjiang, a fruit and vegetable farmer in Chenjiapu, a snow-covered village in Hebei province.

"For those of us in the farmlands and the mountains, as long as they make life better for us, we're happy."