Global warming and Gustav - why they're connected 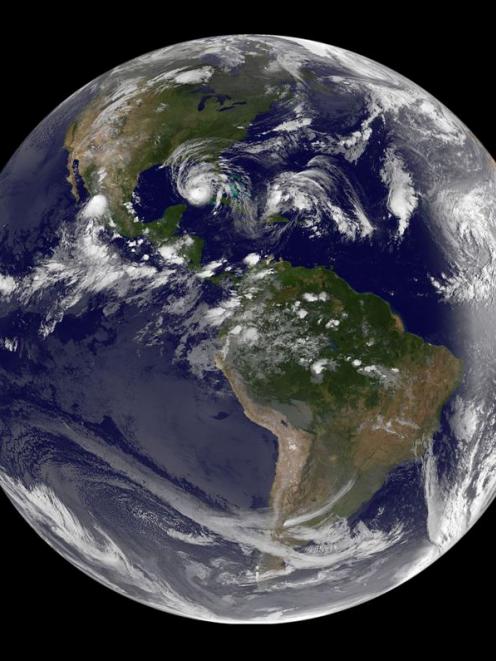 In this satellite image, Hurricane Gustav can be seen in the Gulf of Mexico and to the east Tropical Storm Hanna is approaching the Turks and Caicos Islands. (AP Photo/NOAA)
Global warming has probably made Hurricane Gustav a bit stronger and wetter, some top scientists said, but the specific connection between climate change and stronger hurricanes remains an issue of debate.

The Atlantic is seeing an increase in storms rated among the strongest. In the past four years, Hurricanes Gustav and Katrina, and six other storms have reached Category 4 or higher with sustained winds of at least 211kph, according to research at Georgia Tech.

Six scientists contacted by The Associated Press yesterday said this shows some effect of global warming, but they differ on the size of the effect.

"We are just seeing a lot more Categories 4 and 5 globally than we have ever seen," said Judith Curry, chairman of Earth and atmospheric sciences at Georgia Tech. "The years 2004, 2005 and 2007 are quite high. We're just seeing more and more."

Measurements of the energy pumped into the air from the warm waters - essentially fuel for hurricanes - has increased dramatically since the mid 1990s, mostly in the strongest of hurricanes, according to a soon-to-be published paper in the journal Geochemistry, Geophysics, Geosystems by Kevin Trenberth, climate analysis chief at National Center for Atmospheric Research in Boulder, Colorado.

But the same scientists also caution it is impossible to blame global warming for any single weather event and that some form of Gustav (and other hurricanes) would have likely still formed and turned deadly without man-made climate change.

Yet the fingerprint of global warming on the strongest storms is becoming clearer with new research, scientists said. And that includes Gustav, which reached Category 4 status Saturday before weakening.

"The strongest storms are expected to be stronger," said Gabriel Vecchi, a research oceanographer for a National Oceanic and Atmospheric Administration lab in Princeton, New Jersey. "And since Gustav is a very strong storm, you'd expect Gustav to have had an effect from human-induced global warming."

But how much of an effect is where it gets tricky. Vecchi said he can't tell how much, which makes him uncomfortable as a scientist. Trenberth calculated, in an earlier journal article, that major storms like Katrina and Gustav probably have increased their rainfall by about 6 to 8 percent because of global warming.

Warmer water makes the surface air warmer, which means it could contain more moisture. That means more hot moist air rises up the hurricane, serving as both fuel for the storm and extra rainfall coming back down, said Peter Webster, professor of atmospheric sciences at Georgia Tech.

For the past several years, scientists have traded papers and jibes about the effect global warming has already had - if any - on hurricanes. Some scientists, such as Christopher Landsea at the National Hurricane Center, have faulted the quality of storm numbers and the length of time used for historical study used by Curry, Webster and others to connect to hurricanes to global warming.

"Yes, climate change is impacting hurricanes," Landsea said. But the effect on storm intensity now is "very small," something that can't be noticed in a storm so big, he said.

Hugh Willoughby, a former government hurricane research director and now professor of meteorology at Florida International University in Miami, is not quite as convinced. However, he said a consensus seems to be forming on a global warming effect on just the strongest of hurricanes. But he said he thought Webster and others are exaggerating the effects.

Hurricane activity cycles - where about every 25 years a lot of storms form followed by another quarter-century of fewer hurricanes - plays a bigger role than global warming, Willoughby said.

"We have a real effect due to climate change," Willoughby said. "But the dominant effect in my mind is just bad luck."

Plus, Willoughby said Gustav probably has little or no climate change effect to it because it looks just like similar storms from decades and even centuries ago.

Curry thinks it's more than cyclical. The number of strongest storms now is far more than it was in the 1940s and 1950s, the last flurry of hurricane activity, she said.