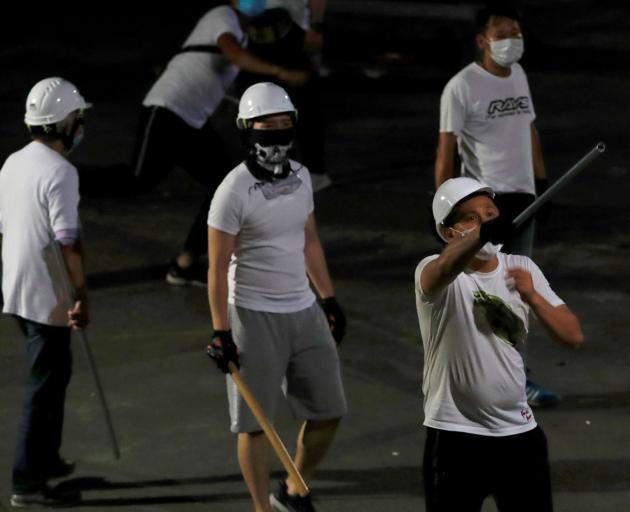 Men in white T-shirts, some armed with clubs, flooded into the rural Yuen Long station and stormed a train on Sunday. Photo: Reuters
Hong Kong police have been criticised for an apparent failure to protect anti-government protesters and passersby from an attack by what opposition politicians suspected were gang members at a train station.

Sunday's attack came during a night of escalating violence that opened new fronts in Hong Kong's widening crisis over an extradition bill that could see people from the territory sent to China for trial in Communist Party-controlled courts.

Protesters had earlier in the day surrounded China's main representative office in the Asian financial hub and defaced walls and signs and clashed with police.

Hong Kong's Beijing-backed leader, Carrie Lam, condemned the attack on the Central Government Liaison Office, saying it was a "challenge" to national sovereignty.

She condemned violent behaviour of any kind and said she had been shocked by the clashes at the station, adding that police would investigate fully. "Violence will only breed more violence," Lam said while flanked by senior city officials.

Some politicians and activists have linked Hong Kong's shadowy network of triad criminal gangs to political intimidation and violence in recent years, sometimes against pro-democracy activists and critics of Beijing.

TRUMP HOPES XI 'WILL DO THE RIGHT THING'

In Washington, US President Donald Trump said he believed Chinese President Xi Jinping has acted "very responsibly" with the protests, which have been the Chinese leader's greatest popular challenge since he came to power in 2012.

"I know that that's a very important situation for President Xi," Trump told reporters when asked about images of protesters being beaten and whether Beijing might have allowed this to happen.

"You could say what you said, but you could also say that he has allowed that to go on for a long time and ... I think it's been relatively non-violent."

Asked if he thought the protests should be allowed to continue, Trump said: "Well, they are ... I don't think China has stopped them. China could stop them if they wanted. ... I think that President Xi of China has acted responsibly, very responsibly. ... I hope that President Xi will do the right thing, but it has been going on a long time, there's no question ..."

Hong Kong has been hit by a series of sometimes violent protests for over two months - its most serious crisis since the city was handed back by Britain to China in 1997 but with democratic freedoms under a "one country, two systems" formula.

On Sunday night, scores of men in white T-shirts, some armed with clubs, flooded into the rural Yuen Long station and stormed a train, assaulting passengers with pipes, poles and other objects, according to video footage.

Witnesses, including Democratic lawmaker Lam Cheuk-ting, said the men appeared to target black-shirted passengers who had been at an anti-government march.

Lam, who was wounded in the face and hospitalised, said the police ignored his appeals to them to intervene to prevent bloodshed. "They deliberately turned a blind eye to these attacks by triads on regular citizens," he told Reuters, saying the floors of the station were streaked with blood.

"I won't speculate on why they didn't help immediately."

Later on Monday night, a police spokeswoman confirmed the arrests of two men, aged 45 and 48, related to an unlawful assembly in Yuen Long. They provided no other details.

Forty-five people were injured in the violence at the station, with one in critical condition, according to hospital authorities.

Hong Kong police chief Stephen Lo, asked about concerns that officers had been slow to respond to the clash, said there had been a need to "redeploy manpower from other districts".

Police stations nearby had closed, given the risk of unrest, and a patrol on the scene needed to wait for reinforcements, he said.

"We will pursue at all costs to bring the offenders to justice," he told reporters, while pledging to restore public confidence in the police force.

Asked if police had colluded with triads at the station, Lo said the force had no connections to triads.

In 2014, Hong Kong police investigated triad gang attacks on protesters during pro-democracy demonstrations that shut down parts of the city for 79 days.

Under the terms of the 1997 handover from Britain, Hong Kong was allowed to retain extensive freedoms not enjoyed on the mainland under the "one country, two systems" model, including an independent judiciary and the right to protest.

Many city residents fear that the proposed extradition law, which would allow people to be extradited to mainland China for trial, would undermine Hong Kong's judicial independence.

The city's Beijing-backed government, responding to the scale of the protests, postponed the bill and later said it was "dead". But the protesters are demanding its formal withdrawal and urged city leader Lam to quit - something she refuses to do.

In a rare comment, the pro-establishment Hong Kong General Chamber of Commerce strengthened earlier criticism of the extradition bill and urged its full withdrawal. It also backed calls for an independent inquiry, acknowledging "frustrations" surrounding perceptions that public demands were being ignored.

On Sunday, police fired rubber bullets and tear gas to disperse activists after thousands ringed Beijing's Liaison Office. Police said protesters hurled bricks, smoke grenades and petrol bombs during the unrest that broke out after hundreds of thousands marched through the streets.

The Chinese government, including office director Wang Zhimin, condemned the turmoil, which included spray-painting and hurling eggs at walls and a national emblem at the Liaison Office, saying the behaviour challenged the "authority and dignity" of the Chinese government.