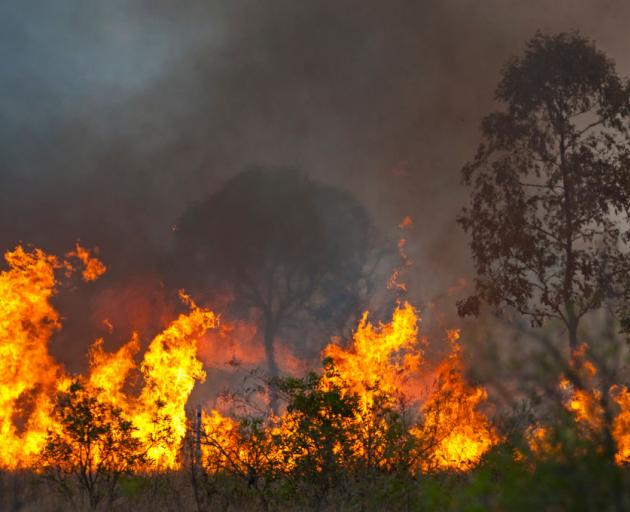 Over 50 bushfires are burning across the state of Queensland, prompting hundreds to evacuate their homes. Photo: Getty Images
Binna Burra resident Sophie Bryden doesn't know if her home is still standing.

And she may not find out for days due to the ongoing bushfire threat near her property.

"You don't know what you're going to come back to," Ms Bryden told AAP on Saturday.

"You're either going to walk into your house and say, 'Thank God, it's all still here' or just lose it (when you see it's gone).

"I haven't slept. I was joking and laughing and just trying to get through it with humour (at first)."

Ms Bryden and her 10-year-old son Tristan were among the hundreds of Queenslanders evacuated as 51 fires blaze across the state.

#BUSHFIRE: With 51 fires burning throughout Queensland police are reminding motorists to limit unnecessary travel and keep roads clear for emergency services. A serious fire is burning in the Stanthorpe and Applethorpe areas, and police are urging motorist to stay away. #9News pic.twitter.com/SBpx3Grv0V

Residents of Binna Burra, in the Gold Coast hinterland on the edge of Lamington National Park, were ordered to evacuate immediately on Friday as the large and dangerous fire was fanned by strong and gusty westerly winds.

At least nine homes have already been destroyed near the township, with one razed at nearby Sarabah.

Ms Bryden left her acre of land at Binna Burra on Friday afternoon.

She went to a friend's home at Beechmont, in the Scenic Rim, where she was again evacuated by police at 11pm on Friday night.

They went to Canungra, 40 minutes away, where they are now camping at the township's show grounds with other evacuees.

"At the end of that day whatever I hold precious is with me right now - my son and my dog," she said through tears at the campsite.

"So anything else, it's sad but it can be replaced.

"But it doesn't help. You'd be just starting again. You hear about it happening to other people, then all of a sudden you are stuck in the thick of it and you say, 'Surely this isn't real'."

Stanthorpe resident Marie Faint has surveyed some of the damage in her Queensland-NSW border town after a fire ripped through on Friday.

Seven structures, including three homes, have burnt down in her region, including nearby Applethorpe.

"It's just horrid. It's just black. There's smoke everywhere, still coming off the trees. Is that going to light up again?" Ms Faint said.

"We witnessed a fire about 100 metres down from where we live and I'm thinking, 'What the hell are we doing back?'