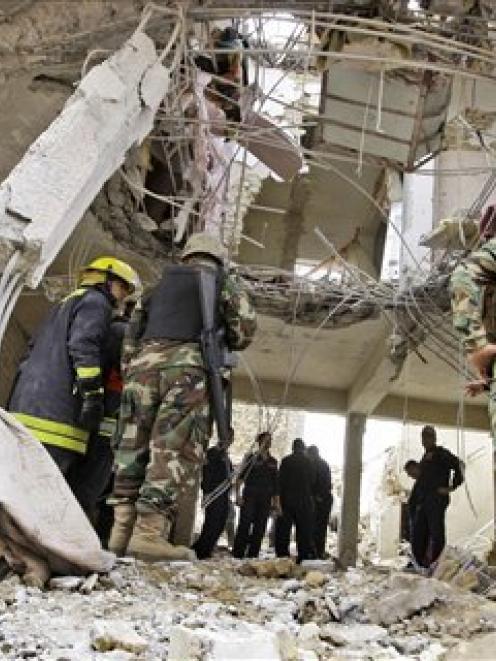 Iraqi security forces inspect the scene where a blast killed seven people in the Hurriya neighbourhood about 500m from a polling station, in Baghdad, Iraq. (AP Photo/Hadi Mizban)
A string of deadly blasts shattered an early round of voting in Iraq, killing 17 people and highlighting the fragile nature of the country's security gains ahead of crucial parliamentary elections this Sunday.

Iraq security forces were out in full force, trying to protect early voters in an election that will determine who will lead the country through the crucial period of the US troop drawdown and help decide whether the country can overcome its deep sectarian divisions.

But three explosions - a rocket attack and two suicide bombings - showed the ability of insurgents to carry out bloody attacks. They have promised to disrupt the voting with violence.

"Terrorists wanted to hamper the elections, thus they started to blow themselves up in the streets," said Deputy Interior Minister Ayden Khalid Qader, responsible for election-related security across the country.

Thursday's voting was for those who might not be able to get to the polls on Sunday. The vast majority of early voters were the Iraqi police and military who will be working election day - when the rest of the country votes - to enforce security. Others voting included detainees, hospital patients and medical workers.

Many of the blast victims were believed to be security personnel, targeted by suicide bombers who hit police and soldiers lined up to vote.

Convoys of army trucks and minibuses ferried soldiers and security personnel to and from polling stations. Many stores were shuttered, and normally crowded streets were nearly empty, as people stayed home on a holiday declared by the government.

About 19 million of Iraq's estimated 28 million people are eligible to vote in the elections, and Iraqi expatriates can cast ballots in 16 countries around the world.

In the first attack, a Katyusha rocket killed seven people in the Hurriyah neighbourhood about 500m from a closed polling station, police said.

The second attack hit the upscale Mansour neighbourhood, where a suicide bomber detonated an explosive vest near a group of soldiers lining up at a polling station, killing six and wounding 18, police said.

The blast left a small crater in the middle of the street, and debris from the explosion splattered around the crater. Pools of blood and burnt human flesh littered the ground along with broken glass, rubble from buildings and the remnants of shops signs.

In the third blast, another suicide bomber blew himself up near policemen waiting to vote in the Bab al-Muadham neighbourhood in central Baghdad, killing four people and wounding 14 others, according to police and hospital officials.

All the officials spoke on condition of anonymity because they were not authorised to speak to the media.

Sunday's elections are only Iraq's second for a full parliamentary term since the 2003 U.S.-led invasion ousted Saddam Hussein, leading to the eventual creation of the Shiite-dominated government in power today, headed by Prime Minister Nouri al-Maliki.

At a high school in Baghdad's Karradah neighborhood, police and military officers crowded into the building to cast their ballots, displaying the now-iconic purple ink - used to prevent people from voting twice - on their fingers.

Many expressed frustration at the government and a desire for change. That was echoed in the northern city of Mosul, where Mohammed Ali Hassan said he voted for the list headed by (former premier Ayad) Allawi, "... because I hope for change, and the people on the list are capable of change."

In the Christian town of Qara Qosh in the northern Ninevah province, a line of blue-uniformed Iraqi police officers snaked out the door of a middle school by midmorning, waiting to vote. To ensure security throughout the day, police officers voted in the morning and then switched places with military officers to let them get to the polls.

Iraqi policeman Haytham Amer, 25, whipped through the balloting in about six minutes, having already decided for whom he would vote before he disappeared behind the privacy of the cardboard walls of the voting booths.

"This process is very good, it was very fast and very organised," Amer said.

In Saddam Hussein's hometown of Tikrit, police 1st Lt. Ahmed Abdul-Hamza said he did not vote in the 2005 election but decided to vote this time, saying, "this election will be a decisive one in Iraq's history because the coming government will lead Iraq when the U.S. forces leave."

There were scattered reports across the country Thursday of people showing up at the polls and not being able to find their name on the voting records.

A senior electoral commission official, Qassim al-Aboudi, said during a news conference that people who are not able to find their names on the voting records will be able to cast a provisional ballot.