View of the aftermath of Hurricane Irma on Sint Maarten Dutch part of Saint Martin island in the Carribean. Photo: Reuters/Netherlands Ministry of Defence

Hurricane Irma strengthened and made landfall in Cuba on Friday (local time) as a Category 5 storm, as millions of Florida residents were ordered to evacuate after the storm killed 21 people in the eastern Caribbean and left catastrophic destruction in its wake.

Irma, one of the fiercest Atlantic storms in a century, was expected to hit Florida on Sunday morning, bringing massive damage from wind and flooding to the fourth-largest state by population.

The scenes along Cuba’s north central coast were gradually coming to resemble the horrors of those of other Caribbean islands over the last week as Irma barreled in for a direct hit at Ciego de Avila province around midnight.

Irma was forecast to bring dangerous storm surges of up to 10 feet (3 meters) on parts of Cuba's northern coast and the central and northwestern Bahamas.

Meteorologists warned that by Saturday morning scenes of far greater devastation were sure to emerge as Irma worked her way along the northern coast westward through Sancti Spiritus and Villa Clara provinces where it is forecast to turn northward toward Florida.

The area is home to pristine keys with more than 50 hotels and fine beaches, vital money makers for the cash-strapped government.

Residents in the central province of Camaguey hunkered down on Friday night. "There are really strong gusts of wind. It is pouring off and on, and the lights are out," Anaida Gonzalez, a retired nurse, said by telephone.

Irma was about 300 miles (485 km) southeast of Miami, the NHC said in its latest advisory.

With the storm barreling toward the United States, officials ordered an historic evacuation in Florida that has been made more difficult by clogged highways, gasoline shortages and the challenge of moving older people.

The United States has been hit by only three Category 5 storms since 1851, and Irma is far larger than the last one in 1992, Hurricane Andrew, according to the Federal Emergency Management Agency (FEMA).

"We are running out of time. If you are in an evacuation zone, you need to go now. This is a catastrophic storm like our state has never seen," Governor Rick Scott told reporters, adding the effects would be felt from coast to coast in the state.

A total of 5.6 million people, or 25 percent of the state's population, were ordered to evacuate Florida, according to the Florida Division of Emergency Management.

U.S. President Donald Trump said in a videotaped statement that Irma was "a storm of absolutely historic destructive potential" and called on people to heed recommendations from government officials and law enforcement. In Palm Beach, Trump's waterfront Mar-a-Lago estate was ordered evacuated.

Irma was set to hit the United States two weeks after Hurricane Harvey, a powerful Category 4 storm, struck Texas, killing about 60 people and causing property damage estimated at up to $180 billion in Texas and Louisiana. Officials were preparing a massive response, the head of FEMA said.

About 9 million people in Florida may lose power, some for weeks, said Florida Power & Light Co, which serves almost half of the state's 20.6 million residents. 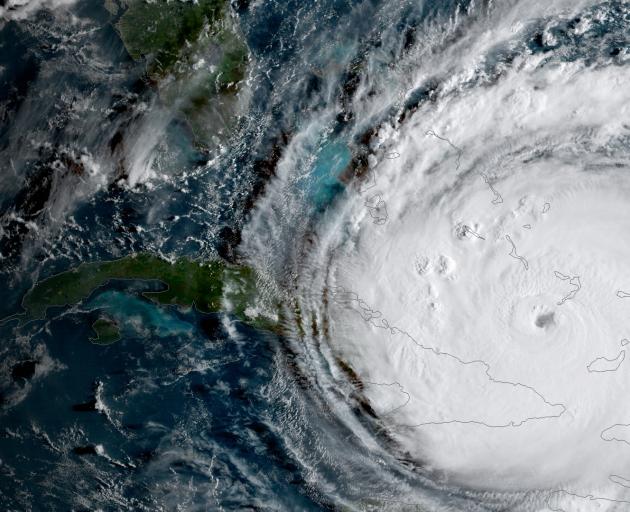 Florida prepares for a major hit from Hurricane Irma. Photo:Getty Images
Amid the exodus, nearly one-third of all gas stations in Florida's metropolitan areas were out of gasoline, with scattered outages in Georgia, North Carolina and South Carolina, according to Gasbuddy.com, a retail fuel price tracking service.

In Fort Lauderdale, most large grocery, hardware and supply stores were closed and do not plan to open until early next week, after the hurricane has passed.

A shelter in southwest Miami filled to capacity just hours after it opened its doors, with people there recalling Hurricane Andrew in 1992, the most destructive to ever hit the state.

"I'm scared because it is bigger than Andrew," said Ann Samuels, 49.

She said Andrew had forced her and her two young children and eight others into a closet. "They say to not stress and not worry, but how can you not?" she added.

Steve Ortega, 29, decided to go home after peeking into the packed shelter. He was 5 years old when Andrew damaged his home.

"I will never forget the noise. That ... was the scariest thing I ever heard in my life," adding he was worried but optimistic his home would remain standing through Irma.

Mandatory evacuations on Georgia's Atlantic coast and some of South Carolina's barrier islands were due to begin on Saturday. Virginia and Alabama were under states of emergency.

The governors of North and South Carolina warned residents to remain on guard even as the storm took a more westward track, saying their states still could experience severe weather, including heavy rain and flash flooding, early next week.

On Wall Street, the S&P 500 ended slightly lower as investors braced for potential damage and massive insurance claims from Irma. Many economists are predicting that third-quarter gross domestic product will take a hit due to the hurricanes.

As it roared in from the east, Irma ravaged small islands in the northeastern Caribbean, including Barbuda, St. Martin and the British and U.S. Virgin Islands, flattening homes and hospitals and ripping down trees.

But even as they came to grips with the massive destruction, residents of the islands faced the threat of another major storm, Hurricane Jose.

Jose, expected to reach the northeastern Caribbean on Saturday, was an extremely dangerous storm nearing Category 5 status, with winds of up to 155 mph (250 kph), the NHC said on Friday.