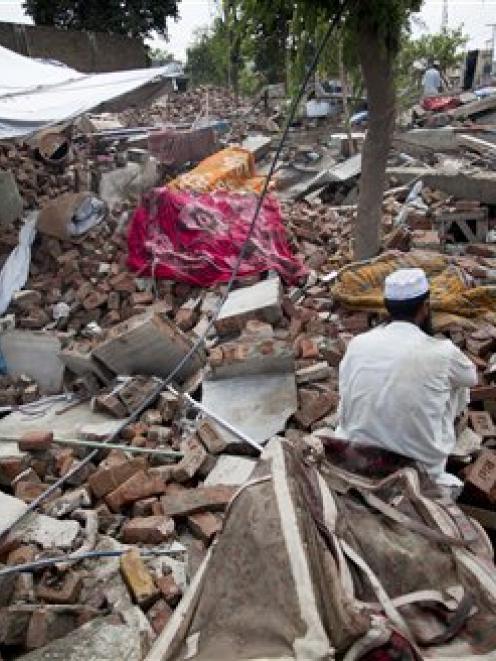 A flood-affected man sits over debris of his house collapsed by flooding in Nowshera, northwest Pakistan, Monday, August 9, 2010. Photo by AP.
The number of people suffering from the massive floods in Pakistan exceeds 13 million - more than the combined total of the 2004 Indian Ocean tsunami, the 2005 Kashmir earthquake and the 2010 Haiti earthquake, the United Nations say.

The death toll in each of those three disasters was much higher than the 1,500 people killed so far in the floods that first hit Pakistan two weeks ago. But the UN estimates that 13.8 million people have been affected - over 2 million more than the other disasters combined.

The comparison helps frame the scale of the crisis, which the prime minister said Monday was the worst in Pakistan's history. It has overwhelmed the government, generating widespread anger from flood victims who have complained that aid is not reaching them quickly enough or at all.

"The number of people affected by the floods is greater than the other three disasters combined," Maurizio Giuliano, spokesman for the UN Office for the Coordination of Humanitarian Affairs, told The Associated Press.

A person is considered affected by the floods if he or she will need some form of assistance to recover, either short-term humanitarian aid or longer-term reconstruction help, said Giuliano.

The total number of people affected in the three other disasters was about 11 million - 5 million in the tsunami and 3 million in each of the earthquakes - said Giuliano.

Pakistani Prime Minister Yousuf Raza Gilani said Monday that the floods were a bigger crisis than the 2005 Kashmir earthquake that killed nearly 80,000 people and the army's operation against the Taliban in the Swat Valley last spring that drove more than 2 million people from their homes.

"The magnitude of the tragedy is so immense that it is hard to assess," said Gilani during a visit to the central Pakistani city of Multan.

Many of the people affected by the floods, which were caused by extremely heavy monsoon rains, were located in Pakistan's northwestern province of Khyber Pakhtunkhwa.

Rescue workers have been unable to reach up to 600,000 people marooned in the province's Swat Valley, where many residents were still trying to recover from last year's fight with the Taliban, said Giuliano. Bad weather has prevented helicopters from flying to the area, which is inaccessible by ground, he said.

"All these people are in very serious need of assistance, and we are highly concerned about their situation," said Giuliano.

At least 31 more people died in Khyber Pakhtunkhwa over the past 48 hours, said the provincial information minister, Mian Iftikhar Hussain.

Hundreds of thousands of people have also had to flee rising floodwaters in recent days in the central and southern provinces of Punjab and Sindh as heavy rains have continued to pound parts of the country.

One affected resident, Manzoor Ahmed, said Monday that although he managed to escape floods that submerged villages and destroyed homes in Sindh, the total lack of government help meant dying may have been a better alternative.

"It would have been better if we had died in the floods as our current miserable life is much more painful," said Ahmed, who fled with his family from the town of Shikarpur and spent the night shivering in the rain that has continued to lash the country.

"It is very painful to see our people living without food and shelter," he said.

Thousands of people in the neighboring districts of Shikarpur and Sukkur camped out on roads, bridges and railway tracks - any dry ground they could find - often with nothing more than the clothes on their backs and perhaps a plastic sheet to keep off the rain.

"We were able to escape the floodwaters, but hunger may kill us," said Hora Mai, 40, sitting on a rain-soaked road in Sukkur along with hundreds of other people.

A senior government official in Sukkur, Inamullah Dhareejo, said authorities were working to set up relief camps in the district and deliver food to flood victims.

But an Associated Press reporter who traveled widely through the worst-hit areas in Sindh over the past three days saw no sign of relief camps or government assistance.

The floods hit the country at a time when the government is already struggling with a faltering economy and a brutal war against Taliban militants that has killed thousands of people.

The US and other international partners have stepped in to support the government by donating tens of millions of dollars and providing relief supplies and assistance.

The US also dispatched a special disaster response team to help co-ordinate its assistance to the Pakistani government, the US Embassy said Monday. Washington deployed similar teams following the 2005 Kashmir earthquake and the Pakistani army offensive in the Swat Valley.

A faltering relief effort could open the door to hard-line Islamist groups, which have already been delivering aid in the northwest, to win public support.