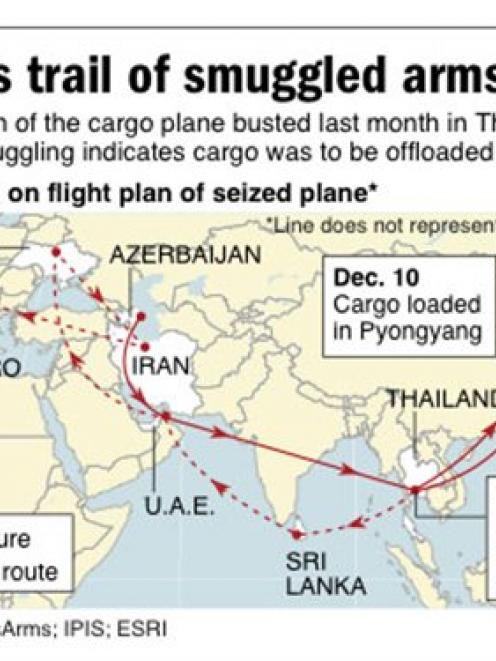 This AP map shows destinations on flight plan of cargo plane seized in Bangkok for weapons smuggling.
The trail of the plane busted in Thailand last month for allegedly smuggling North Korean weapons to Iran leads back to a small air freight company housed near an old Soviet airfield on the edge of the Kazakh steppe.

The aging Russian plane's odyssey took it through a web of companies, financiers and air cargo carriers with addresses stretching from New York through the Persian Gulf to New Zealand, an Associated Press investigation has found.

The persistence of carriers willing to ship anything anywhere for a price - even to countries under international sanctions like Iran and North Korea - has frustrated global efforts to stem the flow of illegal arms.

Alexander Zykov, whose crew was flying the plane grounded in Bangkok, denies he had anything to do with the seized shipment of 35 tons of explosives, rocket-propelled grenades, surface-to-air missiles and other weaponry. But family members say the plane's pilot and crew were working for Zykov's East Wing air freight company when they were taken into custody. And crewmen who have worked for Zykov told The Associated Press that they have flown cargo on rattletrap Russian planes into conflict zones such as Sudan and Somalia.

They often did not know what their cargo really was, four of these crewmen said. Two of them spoke of an industry that sometimes uses falsified flight documents and skirts customs rules.

The Soviet collapse left an infrastructure of idled aircraft and pilots desperate for work, and the families of the arrested crew portrayed them as pawns in this arms trade. Speaking from the Kazakh city of Almaty, Zykov insisted his crew wasn't working for him at the time of the December 12 weapons seizure, saying all five took an unpaid leave about two weeks before the flight.

He and his wife, Svetlana Zykova, who is listed as the plane's owner, denied any knowledge that arms were involved.

"Go find the people who ordered this flight," Zykov told an AP reporter and hung up the phone.

The AP spent three weeks trying to do that, studying documents and talking to pilots, shippers, government officials and experts on arms trafficking. No one would take responsibility for the arms aboard the flight, which, had it not been seized, would have followed a circuitous route spanning more than 24,500 kilometres.

The case came to light when Bangkok police, acting on a tip, said they seized the Russian-made Ilyushin-76 cargo plane and its five-member crew - four Kazakhs and a Belarusian - after finding weapons on board. All five have been charged with possessing arms and are in a Thai jail pending investigation.

The Russian-language flight plan names Mehrabad Airport in Tehran as the cargo's destination. The cargo manifest lists "oil industry spare parts" of various types but no weapons. Aerotrack Ltd of Ukraine and the Korean General Trading Corporation of Pyongyang, North Korea, are identified as the companies responsible for the cargo.

Shymkent, the town where the four Kazakh crew members come from, is a dismal ex-Soviet outpost full of ramshackle houses and kebab shops. Zykov, a local cargo magnate, is something of a legend here, and the airmen who work for him are known around town as "Zykovtsy" - Zykov's guys. According to the arrested crew's families, Zykov has employed them for about a decade and hired them for the Bangkok flight.

Zykov houses his pilots in a compound at the edge of town protected by barbed wire, cameras and a snarling guard dog at the gate. Its massive concrete walls and satellite dishes stand out among the surrounding shacks and hovels. Pavel Mogilevsky, who manages the compound, confirmed to the AP that the crew members arrested in Thailand were East Wing employees.

"Yes, those are our guys. They worked for us," he said, after opening a heavy metal door in the outer wall for a brief chat. But on this particular flight, he said, they were moonlighting for another employer whom he didn't identify, and he denied East Wing was involved.

Zykov's wife, reached by phone in Sharjah, United Arab Emirates, where the couple shares a home, also denied any knowledge of arms aboard her plane, saying: "If we'd known, we would never have leased it out."

Zykov has links to a chain of companies that stretches across four continents. One - SP Trading Ltd, which leased out the plane for this shipment - was created just five months ago and managed by a longtime Zykov associate, Yury Lunyov.

This is not the first time Zykov's name has come up in connection with sanctions-busting flights, said Brian Johnson-Thomas, an arms trafficking expert who works closely with the International Peace Information Service, a Belgium-based independent research institute that focuses on Sub-Saharan Africa. According to a UN Security Council report from November 2006, a firm owned by Zykov's wife provided the plane that carried Somali volunteers to fight alongside the Hezbollah militia against Israel during the 2006 Lebanon War.

"It also flew (Somali) volunteers for training to both Libya and Syria," Johnson-Thomas said.

He added that in both cases - the Somalia flights and last month's Thai seizure - the Zykovs may have been unaware of what their planes were being used for.

In the early 1990s, thousands of flight crews across the disintegrating Soviet bloc, most of them decades from retirement, were discharged, while well-connected businessmen bought up Soviet military cargo planes, mainly old Ilyushins and Antonovs, to start air freight companies. Zykov got his start this way, and some of the airmen in Shymkent defended him as a man who looked after their interests in an industry where work is hard to find and often risky.

"Pretty much every month they call up with offers" of work, said Vitaly, a pilot in Vitebsk, Belarus, home of the fifth crew member arrested in Bangkok, Mikhail Petukhov. Vitaly, a friend of Petukhov who said they previously worked together in Sudan, asked that his surname not be used for fear of losing his job.

"It's not easy working for them. For one thing, their planes are old, so the flights are dangerous. And it also means being ready to break pretty much every aviation law on the books," he said. "But it's work, and they pay well," he added.

In Shymkent, an engineer who has worked on Zykov's planes for years said the men jailed in Thailand were part of Zykov's regular crew. But the engineer said crew members would have been free to take work from another employer between East Wing flights.

"You get paid to do the flight, and you don't ask any questions about what's inside the boxes," said the engineer, who also asked not to be identified, fearing for his job.

On July 26, Alexander Zrybnev, an engineer on the plane seized in Thailand, travelled to the Ukraine capital, Kiev, to join the Zykov crew he always worked with, said his twin sister, Svetlana Naidenova, 53. He waited there for five months, she said, before being assigned to what she called a major flight to pick up and deliver cargo from North Korea in early December.

Two other relatives - Natalya Isakova, daughter of captain Ilyas Isakov, and Yanna Abdullayev, daughter of navigator Viktor Abdullayev - corroborated Naidenova's story in separate interviews. All said they learned of the December 12 arrests of their relatives through the news media.

When Naidenova called Zykov for an explanation the next day, she said, he referred all her questions to Lunyov of SP Trading Ltd. Interviewed by the AP in Kiev, Lunyov said he has worked with Zykov for years, and Zykov confirmed they know each other well.

SP Trading, the company that leased out the plane to make the North Korean shipment, was registered in New Zealand on July 29, roughly four months before the flight took off and three days after its Kazakh crew members had gathered in Kiev. Lunyov conceded a chain of lease agreements links the Zykovs to the plane and crew carrying the North Korean weapons, but he denied they were directly involved in organizing the shipment or knew of its contents.

The chain begins with Svetlana Zykova's company in Sharjah, Overseas Trading FZE, leasing its 30-year-old Ilyushin-76 to a Georgian firm, Air West airlines. The owner of Air West, Levan Kakabadze, told AP last month he did not know the plane's final destination or the real nature of its cargo.

Air West in turn leased the Ilyushin-76 to Lunyov's SP Trading, a transaction carried out through two major New York banks, Deutsche Bank and JP Morgan Chase, which served as intermediaries along with a Georgian and a Danish bank, according to the lease agreement. Both Deutsche Bank and JP Morgan Chase declined requests for comment on the transaction.

SP Trading then chartered the plane on December 4 to a Hong Kong-registered firm, Union Top Management, or UTM, according to the charter agreement. It was the first flight ever handled by either SP Trading or UTM, created just a month earlier, on November 2. UTM reported it was carrying oil industry spare parts from North Korea to Iran, according to the charter agreement and the plane's packing list, which details the cargo.

Extensive efforts since December to find UTM and the man who signed its incorporation in Hong Kong, Dario Cabreros Garmendia of Spain, have been unsuccessful. Messages to the e-mail address given for the North Korean company came back undeliverable, and no one answered the telephone number provided.

New Zealand police said on Friday they were "working with a number of other government agencies to determine links with New Zealand-formed shell companies, in particular SP Trading Limited, and the December 2009 munitions seizure in Thailand."

Lunyov said a Ukrainian firm, Aerotrack Ltd., was to blame for falsifying the paperwork and attempting to smuggle the weapons. It was Aerotrack's job, he said, to chaperone the shipment on the final leg of its journey from Kiev to Tehran, after picking up its cargo from North Korea and making several other stops, including in Bangkok and Al-Fujairah, United Arab Emirates.

On the packing list, Aerotrack is listed as the consignee for the shipment, alongside the shipper - the North Korean company. Efforts to reach Aerotrack were unsuccessful. Its address is listed as a Kiev office building, but security guards and secretaries there said there had never been a company with that name at that address.

The packing list gave the name Victoria Doneckaya as the contact person for Aerotrack. A woman who answered the Kiev phone number listed on the document said it was a private apartment and no one by that name had ever lived there. Faxes sent to Doneckaya's fax number went unanswered.

The Ilyushin's roundabout flight plan looks as complicated as the paperwork that set it up. It took off from Baku, Azerbaijan, and landed in Al-Fujairah in the United Arab Emirates and Bangkok before reaching Pyongyang, taking on its cargo and heading back to Bangkok. Had it not been seized, it would have continued to the Sri Lankan city of Colombo, then Al-Fujairah and Kiev, before doubling back to Tehran to offload - and would have finished up back in Europe, at Podgorica, Montenegro.
AP
Comment now