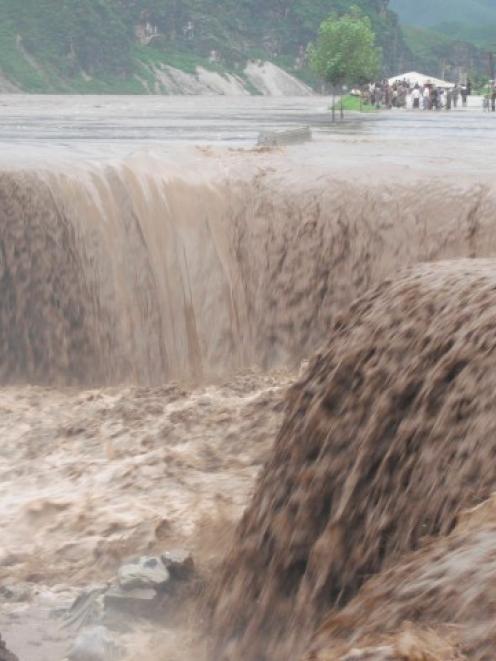 North Koreans stand next to a road as floodwater pours into a caved-in area in Songchon county, South Pyongan Province. REUTERS/IFRC DPRK Red Cross Society
The UN World Food Programme (WFP) has said it will send a first batch of emergency food aid to impoverished North Korea, where a series of deluges and a typhoon have left hundreds of people dead or missing.

The North's state media reported on Saturday that the death toll from flooding between late June and the end of last month had increased to 169.

KCNA news agency said the number of missing had risen to some 400, while 212,200 had been left homeless.

In a statement published on its website on Friday, WFP said it would send emergency assistance comprising "an initial ration of 400 grams of maize per day for 14 days".

KCNA reported on Saturday the floods had washed away 65,280 hectares of farmland. It added more than 1,400 educational, healthcare and factory buildings had also collapsed or damaged.

Since the mid-1990s, North Korea's agricultural sector has become increasingly vulnerable to floods and drought as a result of widespread deforestation.

In Geneva on Friday, UN agencies said access to North Korea has improved during the most recent flooding, indicating the country wants to ease its traditional isolation at least temporarily.

Still, it remains one of the world's most reclusive states, even after young leader Kim Jong-un inherited dynastic power from his father Kim Jong-il, who died in December.

A recent UN report classified 7.2 million of the country's 24 million population as "chronic poor", and said one in three children was stunted from poor nutrition.