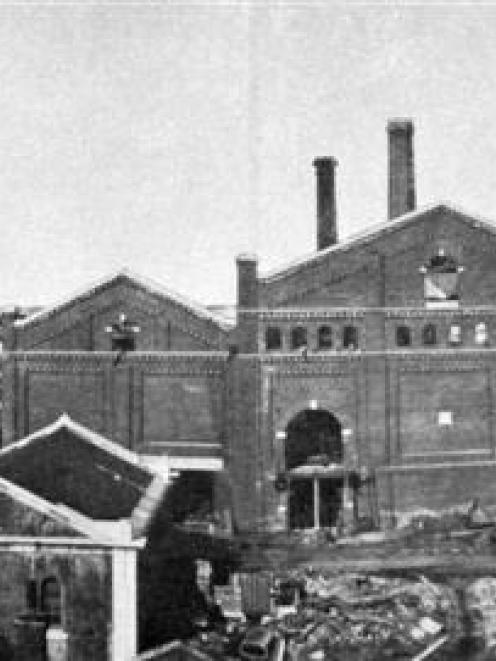 The Dunedin City Corporation's gasworks at South Dunedin, showing the new gasometer on the left. - Otago Witness, 12.5.1909.
CALCUTTA: The Englishman states that arms are being smuggled across the Pathan frontier which bear the Australian and the New Zealand Government marks. It is believed that they were sold when the new rifle was adopted.

Two years ago the New Zealand Defence Department disposed of a large accumulation of obsolete Snider and Martini rifles by tender, a condition being that they must go to England.

The purchaser of the greater number of the rifles gave an assurance that they were being sent to Birmingham, presumably to be taken to pieces and some of the parts used for more modern rifles.

The Government has since received advice that 28 of these rifles (bearing the New Zealand stamp) have been taken from the rebel hill tribes on the north-west frontier of India.

It is well known that the Persian Gulf is being continually watched to prevent shiploads of arms being landed for the use of the war loving Afghan and the numerous hill tribes of the mountainous frontiers of North-Western India, who own allegiance to none save their own chiefs.

No such arms may pass through the well-guarded Kyber Pass, yet rifles that were sleeping peacefully in the Defence store at Wellington a couple of years ago are now being used against our own troops in India.

Many old riflemen swear by the Snider rifle as a most effective weapon up to 600 yards.

• A meeting of the Tuapeka Mouth Close Settlement and Railway League was held in the Schoolroom, Tuapeka Mouth, on Saturday.

The league decided to take thorough and combined action to push its claims for light line of railway from Balclutha to Tuapeka Mouth.

The proposed line would, it is contended, pass through some of the best agricultural land in Otago, including the Barnego, Greenfield, and Clydevale Estates, which were recently cut up and closely settled.