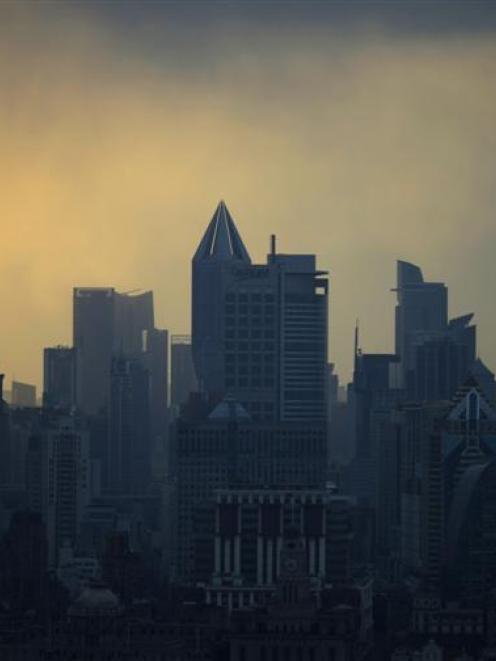 Skyscrapers in downtown Shanghai last month. Photo by Reuters.
Building a skyscraper is the ultimate expression of economic confidence, and more than half of the 124 skyscrapers under construction in the world are being built in China.

But confidence is often based on nothing more than faith, hope and cheap credit, and a frenzy of skyscraper-building is also the most reliable historical indicator of an impending financial crash.

The Empire State Building and the Chrysler Building, the twin symbols of New York's emergence as the world's financial capital, were started at the end of the "Roaring Twenties" but completed in the depths of the Great Depression. The Petronas Towers in Malaysia were built just before the Asian financial crash of 1998. Burj al-Khalifa in Dubai, now the world's tallest building, was just starting construction when the Great Recession hit in 2008.

China avoided that recession by flooding its economy with cheap credit - but that credit has mainly gone into financing the biggest property and infrastructure-building boom of all time. Such booms always end in a crash, but this time, we are told, will be different.

"This time will be different" is the traditional formula used to reassure nervous investors in the last years before a great economic bubble collapses. It was a constant refrain before the Western financial crash of 2008-09, and now it is being heard daily about the Chinese property boom.

People in the West want to believe that China's economy will go on growing fast because the fragile recovery in Western economies depends on it. Twenty years of 10%-plus annual growth have made China the engine of the world economy, even though most Chinese remain poor. But the engine is fuelled by cheap credit, and most of that cheap money, as usual, has gone into real estate.

Take the city of Wuhan, southwest of Shanghai and about 500km in from the coast. It is only China's ninth-largest city, but in addition to a skyscraper half again as high as the Empire State Building it is building a subway system that will cost $US45 billion ($NZ55.5 billion), two new airports, a new financial district, and hundreds of thousands of new housing units. It is paying for all this with cheap loans from state-run banks.

Last year Wuhan municipality spent $22 billion on infrastructure and housing projects, although its tax revenues were only one-fifth of that amount. The bank loans were made to special investment corporations and do not appear on the city's books. The only collateral the banks have is city-owned land, and that is not a reliable asset.

Land in Wuhan has tripled in price during the property boom, and could quickly fall back to the old price or below if confidence in the city's future were to falter. That is quite likely to happen, since Wuhan's housing stock is already so overbuilt it would take eight years to clear even the existing overhang of unsold apartments at the current rate of purchase, and never mind all the new stuff.

Multiply the Wuhan example by hundreds of other municipal authorities borrowing billions to finance a similar "dash for growth," and you have a financial situation as volatile as the "sub-prime mortgage" scam that brought the United States economy to its knees. Except that when the Chinese property boom implodes, it may bring the whole world economy to its knees.

It would be nice to think that the worst of the recession is over in the developed countries, and that the emerging economies will continue to avoid a recession at all. But sometimes the cure can be worse than the disease.

China's strategy for avoiding the economic crisis that has gripped developed countries since 2008 has laid the foundations for an even worse home-grown recession.

"If you have had a good crisis, success can become a curse," wrote Albert Edwards, chief economist at the French bank Societe Generale, in late 2010.

At that point, Chinese bank lending had almost doubled in three years; it has now almost tripled in four. The Government knows that the property bubble is dangerous and is trying to switch spending to consumption, but that is a delicate operation that has to be done slowly, and there just isn't enough time.

When a housing and credit bubble goes out of control, Mr Edwards warned, "you tap your foot on the brakes and the whole thing starts crashing and you can't control it." China is heading for a classic "hard landing", and when it comes, it will slow the whole global economy to stall speed. The next global recession is not far off. It will be at least as bad as the last one, and this time few of the emerging economies (except perhaps India's) will be exempt.

Nobody knows what will happen in China when growth stops and unemployment soars, but the Communist regime is clearly frightened of the answer. Maybe it can ride the crisis out until growth resumes at a slower pace in a few years, but with its Communist ideals long abandoned, its only remaining claim on people's loyalty has been its ability to deliver constantly rising prosperity.

If that collapses, so may the regime.