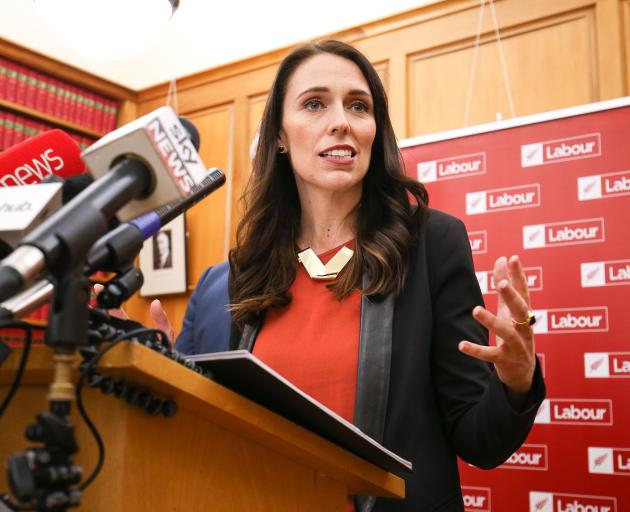 And this is Labour week as Prime Minister Jacinda Ardern settles in - well, zips in.

Stale white males from Richard Prebble up are harrumphing that she won't last, that hers will be a fractious or chaotic one-term government at most.

Peters put his finger on one reason the sad sacks might turn out to be right: storm clouds have been gathering over a rock-star economy high on a migrant/tourist/debt drug cocktail, so it might go bad.

Peters doesn't want the blame if the economy goes down with viruses gestated on Bill English's watch.

In 1957, Labour inherited from a third-term National government a sagging dairy market. It lasted one term. The oil crisis of 1973-74 sank in one term the Labour government of 1972.

Spectres, yes. But pointers to the future?

Ardern is young and fresh. The 1957-60 prime minister was septuagenarian Sir Walter Nash. His cabinet was a tired hangover from the 1935-49 one.

Ardern is strong. English petulantly called her ``stardust''. She beat him in the contest for wily septuagenarian Peters' hand not by giving in but through, as one of the inner group puts it, warmth, directness and authenticity, to which can be added firmness and capable intellect.

Ardern has fashioned a workable working arrangement. Alongside, as de facto deputy prime minister, is James Shaw, still learning but now getting some pass marks after an F for the monumental Metiria Turei mistake. He is likely to prove a capable minister and authoritative leader.

So the Greens might begin to transit from a loose collectivity of anarchists - note last week's irresponsible leaks - to a constructive role in a rules-based democracy.

That transition is critical to the Greens' longer-term survival. As Labour and National after the English-Joyce era push into climate change and environmental issues, it will be harder for the Greens to present as cutting edge. In the campaign The Opportunities Party (Top) usurped that role.

The Greens have a rebuild base of far more volunteers and money in this campaign and real MP talent, including two remarkable new young women and the seriously smart Julie-Anne Genter.

But big sister Labour will also be trying to build to get over the 40% mark. And Top or Top-like options are likely to be around.

New Zealand First, too, needs to rebuild. Peters had the option of setting out to build a durable coalition with National, as he used to muse in the 1990s, with assigned electorates. He chose instead ``change'', rejecting a ``modified status quo'', a form of capitalism which he has said for 30 years leaves too many out.

Labour could go for a 4% party vote threshold to enhance its partners' survival prospects. It could arrange a dignified exit for Sir Winston to a diplomatic or other sinecure and encourage his party evolution towards a centrist balancer.

What about Labour? However well Ardern manages her government, if she leaves Labour still weak in the provinces and below potential in south and west Auckland, as did her mentor Helen Clark, a revived National would be able resume its long-term superiority.

The eight new province-based list MPs need to build real presence in their regions. Stuart Nash did that in Napier: ubiquitous presence, including weekly street-corner meetings with feedback into weekly local ads.

In low-turnout south and west Auckland, where the two-party swing was to National or only slightly to Labour, Labour needs to intensively engage alienated Maori and Pasifika to get them enrolled and voting.

Ardern's bigger challenge is to emulate English's ``incremental radicalism'': set a direction towards policies attuned to the 2020s and the different needs of the rising generation.

Her government's climate change initiatives head down that track.

She and Grant Robertson know about, and have some policies that reflect, the Treasury's ``wellbeing economics'' work which recalibrates capitalism, about which more here soon.

And there is the tax working group to come: will it bring a genuine ``broad-based, low rate'' system that taxes wealth, including income from capital gain, and ``bads'' such as pollution and resource misuse?

I see norm kirk got a mention clever tactic ......