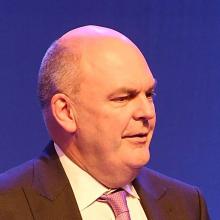 Steven Joyce
In the back rooms, some public servants say Steven Joyce can be a bully.

This past week Joyce has been roaming in the open.

He even infected the usually (though not quite always) courteous Bill English. National turned into the nasty party.

Result: National looks discombobulated. Result: some voters sense National thinks it might lose. They look around.

Joyce last week repeated an old National trick of 2011 and 2014. He threw around inflated "costings'' of Labour's promises: remember John Key's "show me the money'' jibe at Phil Goff in 2011.

Economists of a wide range of persuasions said there was not only not the $11.7billion hole in Labour's fiscal plan Joyce trumpeted, but not much of a hole, if any.

In short, it was fake news. Caught out, Joyce retreated into disputable accusations that Labour hasn't allowed enough for inflation. 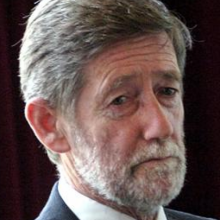 Colin James
Then in a radio "debate'' with Grant Robertson, Joyce was rampant, constantly talking over Robertson and interviewer Guyon Espiner.

Campaign chair Joyce damaged not Labour but himself. He presented as a Minister of Finance who couldn't read a simple numbers table. He also damaged his party. We can be as near certain as anything ever is in politics that Joyce will not manage National's next election campaign.

More puzzling was that English, who used to be good at reading tables, jumped in Joyce's hole then stayed there through the week.

Is Mr Reliable now Mr Rattled? Avoiding Ardern's eye in last Thursday's one-on-one debate, English sneered at her as "stardust''. Ardern made light of that by naming her musical accompaniment Stardust at Sunday's standing-room-only rally.

Ardern is adored by crowds, as a star is. But there is also far more substance - personal, organisational and intellectual - than all but a few knew before August (see my column of May 16). Even those who knew her, including some very close to her, have been surprised by her command of her new job.

Belittling Ardern through women ministers' personal attacks didn't work in March after she became deputy leader. Why did National think it would work from a late-50s man?

Even if National scrambles into a fourth term, it is on the downside of history. Its adherence to the Friedmanite paradigm has accentuated and embedded inequalities a moderate conservative party would seek to avert.

Conservative English's attempts these past two years to quench those inequalities has included some intelligent interventions. But his opponents and under-40s want a much deeper rethink. A tiny indicator: the Bauer poll last week recorded English far ahead of Ardern as economic manager overall but only equal with her among the under-40s.

Over-40s are good for a three-year term. Under-40s are the longer-term future.

This is a challenge for those anchored in the status quo. It is no surprise that the acceptance list for a Labour dinner for senior businesspeople in Auckland topped 75 and a heavyweight had to be turned away. Those affairs used to be cosy, near-pro forma.

Business needs some idea of what might be in store.

One combination that might be in store is a Labour-Green-Maori party show. In poll averages that combination is now one seat short of a majority.

That combination would free Ardern's hand to embark on English-style "incremental radicalism'': clear directional change but careful steps down that path over two or three terms.

Most in business would prefer neither the increments nor the radicalism.

More likely is Labour-New Zealand First: "progressive'' plus "populist''. Can that work?

In management terms, yes, because Ardern is capable of making it work. In political terms, also yes. New Zealand First is no longer Winston Peters.

Its caucus has been acquiring ability - 2014 newcomers Fletcher Tabuteau (43) and Darroch Ball (35 - whom I left out of last week's count of under-40s, which is growing as Labour's support grows) are not populist lightweights.

Provided its vote doesn't collapse, the post-election caucus will have more of their ilk.

Peters is 72. He tends to ramble more in speeches. If Sir Winston were to go off to a respectable retirement in a big foreign posting, New Zealand First could well morph into a something nearer a centrist party.

Most of the policy platform now reads centrist, if anything nearer Labour than National. That gives Labour some advantage if New Zealand First decides the government after the election.

Labour would also have that advantage if it has more seats than National - unimaginable on July 31 but now distinctly possible, even though Labour's poll figures probably have to be discounted by 1% to 3% to allow for young voters' slack enrolment and voting.

But this column has got ahead of itself. There are 11 days to go. There is wide scope for more surprises.

I am not so sure that the radicalism will be incremental. Per the Labour manifesto Union Power Policies will be rammed through within 100 days. Particular points to note are that non union employees will not be able to receive the same benefits from collective agreements. Some people will say fair enough but it means that a business no longer controls terms of employment to all employees. Union rights will also be applied to sub-contractors which will open up a minefield of issues. There will have to be some kind of audit process to check that non union employees are not being given the same benefits as union employees.

I don't understand. Why would an employer want all workers to have the same wage 'rights?'.