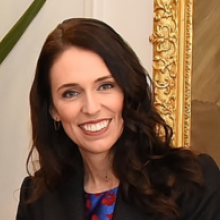 Don Brash's 2002-05 18-point rescue of National beats that. But Ardern did it in under eight weeks, combining substance and connectedness. She is not ``stardust'', Bill English's shabby scoff. She is of a rising generation, he of a passing one.

Ardern settled into the prime ministership as if she owned it. Now she has to prove herself as manager and presenter of policy innovations for changeable, uncertain times - and do that while corralling rogue support-party ministers and covering for a fading Deputy Prime Minister.

My runner-up is Kennedy Graham, for his remarkable feat of assembling the all-party Globe MPs group on climate change, a highly divisive issue. He fell out with the Greens' top brass on a point of principle, honesty, and thus fell out of Parliament, where principle often submits to pride, posturing and perfidy.

The year's big story is the youthing of government and Parliament, taking us out from the baby-boomers' long shadow. So, a baby-boomer myself, it is time to ask who is my politician of my time (so far).

Twenty years back English was of a cohort who had grown up under market-liberalism. He said the divisive 1980s-1990s debate was decided. So build policy within that new paradigm.

After leaping to leader then crashing in 2002, he found his right place as Sir John Key's deputy, money manager and policy wonk. His method was ``incremental radicalism'', significant change in smallish steps.

English's injection of investment thinking into social policy, at last this year edging towards something more like genuine investment - building assets - was the 2008-17 government's most important innovation. In the right hands, it could potentially greatly sharpen policymaking.

So he ranked in my top three - until in the election campaign he backed to the end his party's fabrications about Labour policies. That diminished him and his party. So, too, his brazen switches in opposition.

I started, too young, in the parliamentary press gallery in 1969. Consummate operator Sir Keith Holyoake was nearing the end of a long reign, so was not truly of my time (just as post-baby-boom Ardern will reach beyond it). Likewise Sir John Marshall, from whom I gleaned a way to analyse the National Party: that it is strongest when its moderate liberal and conservative strands are in command and in constructive tension.

Counterpuncher Sir Robert Muldoon bestrode a decade to 1984. But he left the country worse for his ``ordinary bloke'' than he found it.

Sir Roger Douglas crashed through to Friedmanite market-liberalism but crashed his party. David Lange was a superb one-liner but not a manager or chair. Sir Geoffrey Palmer balanced Friedmanism with truth-and-reconciliation with iwi which then morphed into biculturalism, that 1984-90 Labour government's biggest legacy.

Jim Bolger's legacy is to have faced down his Cabinet and party and kept that Treaty process going. Aotearoa-New Zealand is in his debt. But he betrayed his promise of a ``decent society'' by deferring to Ruth Richardson's indecent 1991 ``mother of all budgets''.

Sir John Key was salesman: smart, a commanding vote-winner but ephemeral. He said he wanted his legacy to be what he did for disadvantaged children. It is a thin legacy.

For intellect, social democrat Sir Michael Cullen (KiwiSaver, Super Fund) and liberal-conservative Simon Upton are my top MPs. But not top of the bill.

So to 1972-4 prime minister Norman Kirk, the pivot between traditional Labour on the economy and society and rising Labour on the independent and bicultural New Zealand to come. He greatly impressed this young journalist and still does this crusty one, in hindsight.

Kirk might well have become one of our greatest. But he died after 20 months in office, so wasn't tested.

So to a woman I met when she was 20-something, shy, ungainly but very intelligent, determined and climbing Labour's ladder. Who was wont to tell her MPs I was a Tory when her opponent, Jenny Shipley, was calling me biased (for Labour).

This prime minister ran a tight ship in her 2000s reign. There were blind spots (on biculturalism), dark spots and mistakes but no more than by most leaders and outpointed by her positives.

She was the most accomplished and internationally respected manager of foreign policy since Peter Fraser, as her United Nations posting demonstrated.

At home she pruned market-liberalism and governed towards the centre, settling the country and her party after the 1980s-'90s turmoil. She was no popularity contestant but she won wide respect.

By example, she validated women's claim to a full place in society and history.

Helen Clark is my politician of my time.

what great things have been done....