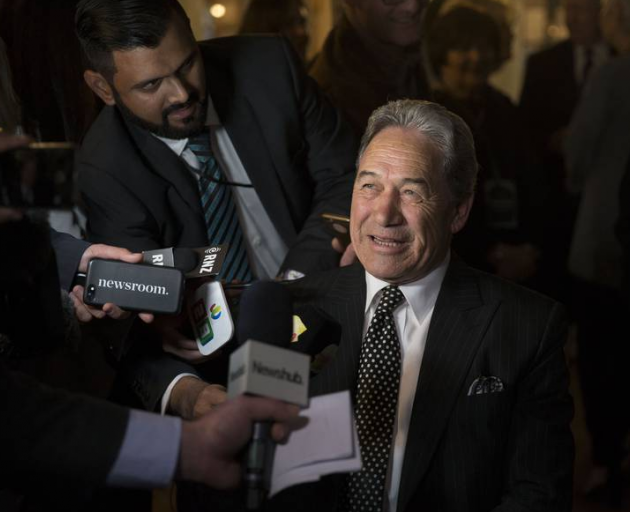 NZ First Party leader Winston Peters. Photo: NZME
There has been much ''grumping'' that Winston Peters and New Zealand First, with a 7.2% vote, decide who leads the government. That's MMP.

These grumpers, who tend to be beneficiaries of the current economic paradigm, brush off the two democratic votes for the MMP system, in two referendums in 1992-93 and one in 2011.

They forget that in 1993, the last first-past-the-post election, Jim Bolger got only 50 of 99 seats and if he had been one seat down, as he was on election night, would have needed either Peters or Jim Anderton to govern. As it was, he had to filch Sir Peter Tapsell from Labour as Speaker.

In June this year, in first-past-the-post Britain, Theresa May had to go grubbing to a populist Ulster party to scrape a majority.

In Australia Malcolm Turnbull has a majority of one in the federal Parliament's lower house, elected under the preferential vote system, and is in a minority in the Senate, elected by single transferrable vote.

So flipping to a different voting system could still leave grumpers grumping. In any case, National's 44%, while impressive after three terms, is not a majority.

Moreover, if New Zealand First goes with Labour-plus-Greens this week, well-off grumpers might thank it for modifying some Labour-Green policies.

Some grumpers - and, with them, a National party which in the campaign concocted fabrications about Labour's fiscal hole and income tax plans - also cynically pushed a National-Greens deal.

Greens could not join a party that, to the frustration of some in National's own Bluegreens ginger group, has dawdled on climate change.

So wary of big parties are some Green Party members that they opposed signing up with friend Labour in March to fiscal parameters. National's Greens ploy seemed designed to pressure Peters.

That is not to say there isn't work to do on MMP. The Electoral Commission report after the 2010-11 referendums recommended dropping the ''waiver'', which allows a party which wins an electorate seat to get a total of seats proportional to its party vote without crossing the 5% threshold.

If that had been done the Maori Party would have had one seat, not two, in the 2014-17 Parliament.

To compensate for loss of the waiver, the commission wanted the 5% threshold cut to 4%, the figure the 1986 royal commission proposed.

Judith Collins, as Justice Minister, binned the report. Correct democratic process would have been to get a Bill drafted and leave Parliament to decide. National benefited from the waiver's boost to its tiddler support parties.

Keeping the number of electorates down adds a rural buffer to many provincial city seats, making them harder for Labour to win and keep a presence there through resident MPs - to be ''part of the communities'' as Grant Robertson put it after the 2014 disaster.

So Labour's new caucus has 29 electorate MPs and 17 list MPs. National has 41 electorate and 15 list MPs, so has more national presence.

The good news for Labour from the final count is that it has its highest score since 41.1% in 2005. Moreover, another 4935 votes off National would have got Labour another seat off National.

Labour is close to Helen Clark's 38.7% in 1999 when she first took office, with the Alliance - in a minority government, supported from outside by the Greens.

Clark built to 41.3% in 2002 by cannibalising the Alliance after it split. National also disintegrated, down to 20.9%.

Labour can't cannibalise the Greens without sinking them. Much the same goes for New Zealand First.

So Jacinda Ardern, whether in opposition or government, must eat into National's vote by building a real presence in middle New Zealand, notably in the provinces.

She needs also to suss why turnout is so low in south Auckland and why Labour underperformed in west Auckland and figure out how to get people in those Labour ''strongholds'' enrolled, engaged and voting.

Bill English's task is to work out how to pay the price of New Zealand First's support if Peters goes his way - given the large holes in Steven Joyce's budget in hospital deficits and other funding shortfalls. Add that to the chronic political illnesses in housing, children in need, crime, drugs and much else which have worsened on his watch.

If in opposition, whoever replaces English will also need to work out how to get on board the generational change train.

That's the longer term. In three weeks trade talks hit a TPP crunch. The election gave a majority to three parties who reject TPP as it stands, which could be ground-shifting for New Zealand's international positioning.

Back to first past the post....The way it is now people that are not voted in .get in on list...some would never become an MP other wise