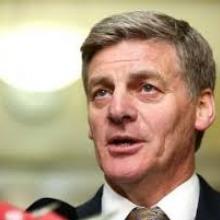 Bill English
Bill English's mission is to stop the new Government "frittering away'' his government's fiscal and economic gains.

Jacinda Ardern and co don't intend to do that but do aim to fritter away homelessness, child poverty, low-wage settings and tax privileges for the better-off.

Tax was big in the election campaign. After Steven Joyce fell down the huge hole he claimed to have dug in Labour's fiscal plan (forgetting his own big health fiscal hole) it was tax that got National back in the game.

English/Joyce said Labour was plotting a wide range of taxes. One was an income tax rise - when actually Labour was promising only to undo the cut National had put in its budget families package.

English did not back off this untruth even in the final leaders debate, long after it was exposed.

Well, it put a floor under National's vote, a platform for English to call the Government a ``minority''. (Actually it is National's four-party 2008-17 governing group's 46.2% total vote that is the minority, versus the three-party Government's 50.4% total and a total of 52.8% for parties, including The Opportunities Party, which argued for significant divergence from the English/Joyce catechism.)

English/Joyce also scarified enough voters to scarify Labour into softening its tax policy. It progressively softened its pledge on day one of Ardern's leadership of a working group to explore all options for tax reform, including on wealth, and act on its findings.

Any changes Labour does now propose will be put to voters in 2020 so the earliest they will apply will be six years after Grant Robertson first made the working group pledge in 2015.

The retreat included exempting the family home from any capital gains, land or inheritance tax. Yet a land tax called local body rates does tax the family home. On the other hand, the English/Joyce capital gains tax on house resales within a ``bright line'' of two years does exempt the main family home.

Taxes have many purposes: to fund defence, safety and courts and matters that need collective action, including regulation infrastructure; to fund specific services, such as accident compensation levies and petrol tax for roads; to price extraction of common resources for private use or profit; to reduce inequalities and lift opportunity through health, education and other services and income support; and to encourage or discourage activities through subsidies (irrigation) or penalties (smoking and pollution).

The taxing principle laid down by the Fourth Labour Government in the 1980s was that taxes should be broad-based and low-rate. Are they?

Logically, a broad-based income tax would require everyone to pay it on all their income. Capital gain is income. Not taxing it favours the better-off over the less-well-off, which increases inequalities.

Likewise, not taxing wealth. Better-off people accumulate wealth and pass it on to their children, embedding privilege.

Income tax is at a relatively low rate by rich-country standards. But is it broad-based?

All this - and a possible lower income tax rate for small firms - is on the working group's agenda, with GST a possible exception. Robertson will also get new Labour MP Deborah Russell involved. The former tax academic published a useful little book earlier this year with tax practitioner Terry Baucher.

And the riding instructions will include keeping changes tax-neutral: not adding to the total tax intake. That would help Labour sell it in 2020.

That is a big agenda. Tax is a cornerstone test for Robertson and Ardern as reformers.

Robertson has a related early test: updating 1980s monetary policy to 2020s realities. His pre-election aims were limited: an employment target alongside inflation, outsiders on the rate-setting board and publication of its minutes.

The Treasury is doing a deep review of monetary legislation, to the intense annoyance of the Reserve Bank and its acolytes, including former chairman Arthur Grimes. If the Treasury review turns out bold, will Robertson pick that up once the bank's new governor is appointed?

Reshaping monetary policy would play big with specialists but not with voters. Tax changes always jangle voter nerves and National will aim to intensify the jangle.

So if the Government does want a 1980s-style deep tax reform, as most days it seems to be saying, it will need to sell it hard, daily, all the way to next polling day. Can it ``do this''?

We need to have a government that gets things done...but not blow all surplus money. .I can see tax will go up....to get money or some of it....This is a tricky area. as inflation comes into it....interest rates....etc....We can only pray. they are sensible with finance .